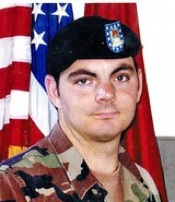 He is buried at Sweetwater Valley Memorial Park, Sweetwater, TN

Joey Hunt, as he is remembered by us, was our oldest child. He lived in Sweetwater all his life. He loved sports of any kind and the outdoors. He leaves behind two beautiful little boys. He joined the Tennessee National Guard in 1999. When he was called upon to go to war he went gladly, eager to serve his country. He related many stories to us about his time in Iraq and kept in touch as often as possible. Joey was with the 278th 3rd division combat team knife stationed in Iraq. Just a few weeks from coming home his humvee was hit by a roadside bomb. He was much loved and is greatly missed by all who knew him.
–Submitted by his mother, Marsha Hunt

On May 19, 2006 Tennessee Governor Phil Bredesen signed a bill from the Tennessee Legislature honoring the memory of Sergeant Joseph D. Hunt, of Sweetwater, with a memorial bridge located on State Route 840 in Rutherford County, Tennessee. State Route 840 was designated in the Public Acts of 2005 as the Tennessee National Guard Parkway and has several intersections and bridges dedicated to the memory of fallen Tennessee National Guardsmen. The Sergeant Joseph D. Hunt Memorial Bridge was dedicated September 28, 2007 and is located on State Road 840 at the West Fork of Stones River in Rutherford county.