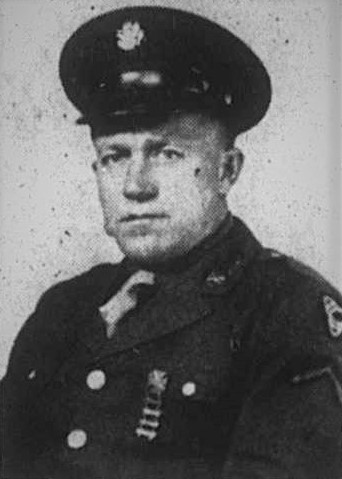 Rogersville Review, September 7, 1944
Pfc. Joseph C. Mooney, U.S. Artillery Corps, was killed in action in France on August 4th, the War Department notified his parents, Mr. and Mrs. C.A. Mooney of Route 1. Pfc. Mooney was formerly employed by the TVA but was operating his father’s farm prior to his induction. He entered service April 21, 1942 and landed overseas Feb. 9, 1944. He received his basic training at Fort Bragg, N.C. and Camp Stewart, Ga., and was stationed nine months with the coast guards at Boston, Mass. After leaving there he was at Camp Edwards, Mass., Camp Campbell, Ky., and Camp Davis, N.C.
He received several passes and furloughs and always enjoyed being with friends and home folks. He was stationed in England after going overseas. Up until D-Day when he entered the battlefield of France, he often wrote and said he would have plenty to talk about when he came home. He often wrote: “I have hopes of being back home, but I have to go this way, I am ready. May we all be prepared to meet Him in a better home.”
Clifford was 35 years of age. He professed Faith in Christ about 19 years ago and first joined Fairview church. Later he moved to Bridgeport as a charter member.

Rogersville Review, September 16, 1948
The body of Pfc. Joseph Clifford Mooney, 35, will arrive in Bulls gap Saturday, September 18, and will be brought to Colboch-Price Funeral Home to remain until Monday when it will be removed to the home of his father, Charlie A. Mooney, Route One.
Last rites for Pfc. Mooney, who was killed August 4, 1944, in France, will be held from the Fairview Baptist Church, Whitesburg, Route 2, Tuesday afternoon at 2 o’clock.
Pfc. Mooney entered service April 22, and landed overseas February 9 of the same year. He was stationed in England until D-Day when he was sent to France. He is survived by his wife, Mrs. Opal Bullion Mooney, Morristown; his father, Charlie A. Mooney, Route One; a brother, Lawrence E. Mooney, Persia, Route Two and two sisters, Miss Anna Mae Mooney and Mrs. Cecill Harrell, both of Route one. 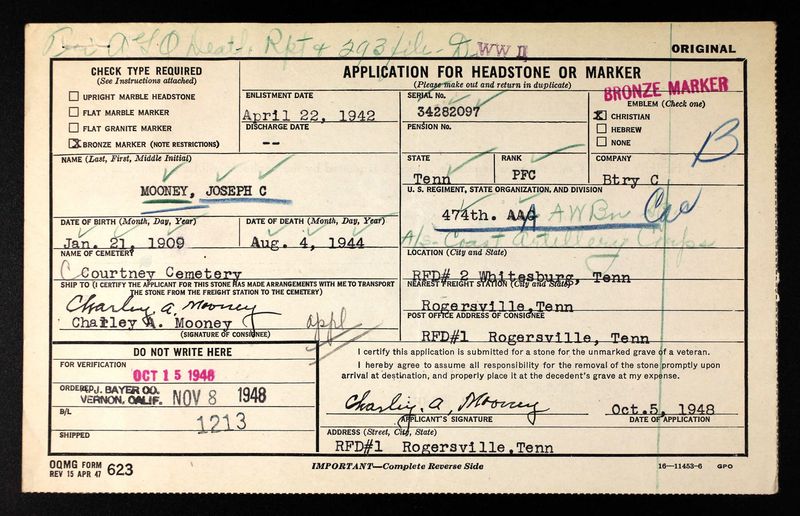