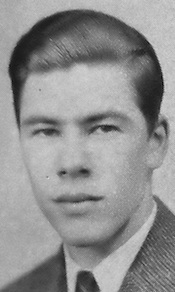 Joseph was born on 1 December 1922 in Johnson City, Washington County, Tennessee. He graduated Science Hill High School, Class of 1940 and attended the State Teachers College, now East Tennessee State University for two years prior to enlisting. While at the State Teachers College, Joseph learned to fly as a member of the Civilian Pilot Training Program conducted by the school at the Regional Airport.

He enlisted as an Aviation Cadet in the United States Army Air Forces in Nashville, Tennessee on 31 October 1942 with service number 13062773. After his evaluation at the Classification Center in Nashville, he was selected for pilot training and dispatched to Chico Army Airfield in Chico, California for Basic Flight Training.

After he completed the nine week training course at Chico, Joseph was sent to Williams Army Airfield (AAF) in Mesa, Maricopa County, Arizona for Advanced Flight Training. He was assigned to the 533rd Flying Training Squadron and was flying a Curtiss-Wright AT-9, called a Jeep, tail number 41-5865 in bad weather on 25 September 1943. Control of the aircraft was lost due to this bad weather crashing four and a half miles south southwest of Williams AAF. He along with another Aviation Cadet were killed in the crash.

Joseph was returned home and services were conducted at the St. John’s Episcopal Church with members of the local Boy Scouts as flower bearers. His military escorts were from the 12th College Training Detachment, State Teachers College. Joseph was interred in Section I, Lot 279, Space 5 at the Monte Vista Memorial Gardens in Johnson City.

Joseph’s the son of Joseph Andrew Summers, Senior and Elizabeth Kaufman. Joseph Senior was an officer in the United States Navy during World War I and a past Post Commander of the American Legion “Kings Mountain” Post #24 in Johnson City. 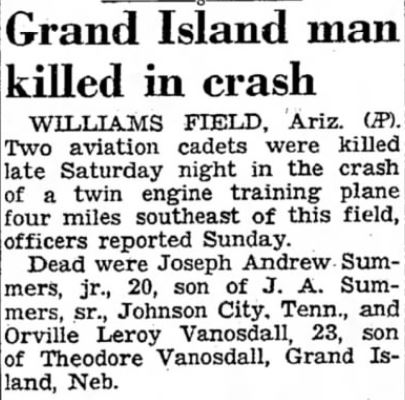