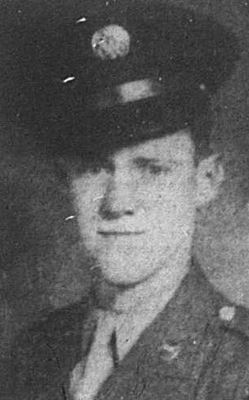 From the Knoxville Journal:
“Telegraph Key Clicks Out a Message for Agent ‘War Department Regrets””

White Pine, Dec. 7- The telegraph agent sat in his quiet office, his thoughts with his son, far away on the battlefields of France. Suddenly, the telegraph keys began to click–dot, dash, dot, dash–and the agent Edward C. Shell reached for his pencil, ready to take what he supposed would be a routine message–maybe to one of his neighbors. The message began–“The War Department regrets”–“death in action”–‘Your son”– the steadily clicking keys continuing, painstakingly, to spell out the agent’s own son, Staff Sgt. Joseph A. Shell, who died in action Nov. 13. The suddenly weary father laid down his pencil, picking up his key and was leaving the office when his wife came in. “What’s the matter,” she asked. “I’m locking up for the day,” he said. “Joe’s been killed.” Agent Shell is back at work now, memories of his dead son mingling with thoughts of his other sons and daughters. One son, Sgt. Carl Shell, is with the 761st Engineers in Italy. Two others, Malcolm and E.C. Jr., live in White Pine. The agent’s two daughters are married, one Mrs. Henry Morrow, living in Knoxville, the other Mrs. Alvin E. Smith, in Concord. Staff Sergeant Shell, 22, was serving with the 314 Infantry at the time of his death. A graduate of White Pine High School, he had been in service two years and overseas six months. He was employed with TVA at Cherokee Dam before entering the Army and was a member of Concord Methodist Church. 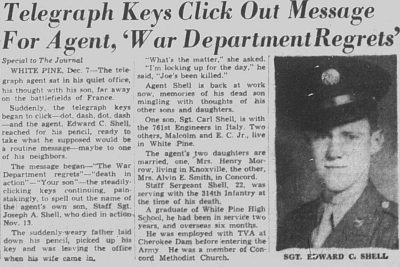 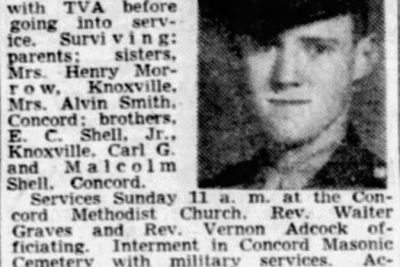