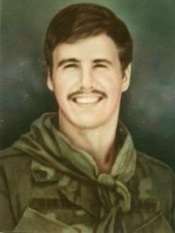 Tony was a member of the Aero Rifle Platoon, Air Cavalry Troop, 11th Armored Cavalry Regiment. His tour in Vietnam began on November 24, 1968. He was killed in action in Tay Ninh, South Vietnam. Sgt Oreto is honored on Panel 27W, Row 76 of the Vietnam Veterans Memorial.

Citation for posthumous award of the Silver Star
The President of the United States takes pride in presenting the Silver Star Medal Posthumously to Joseph Anthony Oreto US51670676, Sergeant, United States Army, for gallantry in action while engaged in military operations involving conflict with an armed hostile force on 13 April 1969 while serving as Squad Leader with the Aero Rifle Platoon, Air Cavalry Troop, 11th Armored Cavalry Regiment, in the Republic of viet. On this date while conducting a bomb damage assessment in a heavily-fortified enemy base camp, the platoon suddenly came under intense machine gun and antitank rocket fire from a well-concealed and well-entrenched hostile force. Sergeant Oreto and his lead squad were immediately pinned down in an open area directly in front of the enemy positions. Realizing the desperate situation, he and his men were in, Sergeant Oreto single-handedly assaulted the nearest enemy bunker. While the hostile fire was concentrated on him, his men were able to maneuver into more secure positions. As he prepared to throw a hand grenade into the enemy bunker, he was fatally wounded by hostile fire. Sergeant Oreto’s outstanding courage, unwavering devotion to duty and deep concern for the welfare of his men were in keeping with the highest traditions of the military service and reflect great credit upon himself, his unit and the United States Army.

“Tony was a squad leader with the Aero Rifle Platoon, Air Cav Troop, of the 11th A.C.R. Blackhorse. He arrived in the platoon late in 1968 and was assigned to the 4th squad. The mission of this unit was as a heliborne assault infantry platoon. On missions, this platoon consisted of 28 soldiers, and in many cases less. The ARPs would engage the enemy in combat and cut off all routes of escape. They would do snatch missions, bomb damage assessments, and rescue downed pilots. Tony was a first class individual, with a great sense of humor that manifested itself in the toughest of times. He was dedicated to his fellow soldiers and was a consumate leader. His call sign was Raider 64. For 33 years I have wanted to contact his family and tell them about Tony in this period of his life. I feel blessed to have known him and feel that with his death the world was deprived of one of its finest men.” Posted by David L. Summers at viet Veterans Memorial Fund Web page.