Joseph Arnold Jett was born 15 July 1914
He landed at Normandy, France on July 4, 1944 with the US Army, 8th Infantry Division. He was killed on the first day of combat, 7 July 1944.
Buried at Batley Cemetery, Oliver Springs, TN

The Knoxville News-Sentinel, August 17, 1944
Mrs. Joseph Jett Byrd, of Batley, near Oliver Springs, has been informed by the War Department that her son, Pfc. Joseph Arnold Jett, was killed in action in France July 7. Pfc. Jett had been in the service a year and nine months. He was a farmer before entering the service. In addition to his mother he leaves sisters, Mrs. Zella Pierce, of Knoxville; Mrs. Vergie Crowe of Oliver Springs; Mrs. Freddie Russell, Clinton and Mrs. Everett Law of Oak Ridge, and brothers, Bill of Knoxville, and Oral Jett of Batley. Pfc. Jett was to be married to Miss Helen Toy, of Atlantic City, N.J. as soon as he returned from overseas. 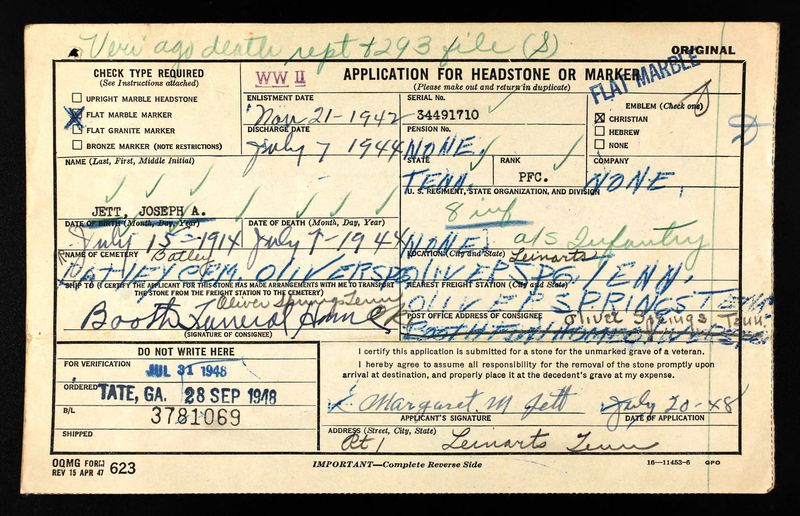 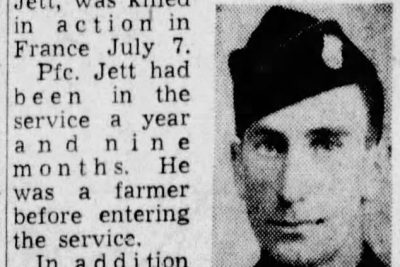