The Dayton Herald, July 15, 1943
Pvt. Jones Revis, 26, son of Mr. and Mrs. Richard Revis of Washington cummunity, was fatally injured July 12 when struck by an automobile in San Diego, Calif. Pvt. Revis was a member of Battery K, 204th C.A. (AA) stationed at San Diego. He was inducted into the service on Nov. 28, 1942. He is survived by his parents; three brothers, Pfc. Osburn Revis of Newport News, Va., Leland Revis and Richard Jr., of Old Washington; two sisters, Mary Ellen and Hazel of Chattanooga; and his grandfather, Bert Revis of Dayton. The body will be sent to Dayton, and upon arrivl funeral arrangements will be announced by Sawyers Funeral Service. 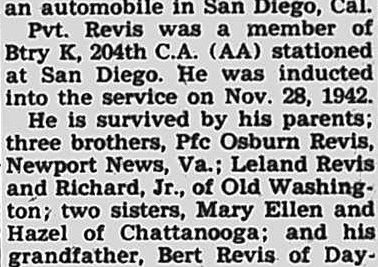