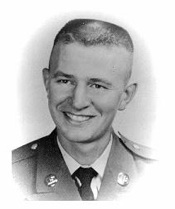 Sergeant Johnnie Hugh Patterson of Oliver Springs was born on April 29, 1947. He was married to Sinda Gail Jenkins. He served in the military for one year. His tour in Vietnam began on July 8, 1967. He served as an infantryman (Airborne Quality) in B Company, 2nd Battalion, 502nd Infantry, 101st Airborne Division. He died at the age of 20 on August 13, 1967 in Quang Tin, South Vietnam. His death is listed as a hostile, ground casualty resulting from gun or small arms fire. He died outright. He is buried in Forstbottom Cemetery in Oliver Springs. His daughter, Johnnie April West, was born a few months after his death.