Private John W. Parker #14047062 US Army was born in 1922 along with his twin brother Don F. Parker to George M. and Lucy Cameron Parker. Their other siblings were Rosalie E. Parker, Francis N. Parker, and Elbert C. Parker.

After the invasion and subsequent surrender of the Philippines to the Japanese, both brothers became POW’s. Don was taken to Japan and repatriated after the surrender at POW camp Sendai 3B-Hosukura Japan and returned home.

John was loaded aboard the Japanese hellship Arisan Maru in October 1944. On the 24th of October 1944 the Arisan Maru was 225 Miles off the coast of Hong Kong. The unmarked ship was spotted by the American submarine USS Shark, and sunk by torpedo attack. Of the 1800 POW’s aboard 7 survived.

Corregidor fell May 7, 1942. His parents had not received word from Don or his twin brother John. They were in the same military outfit since Pearl Harbor attack. The mother, Mrs. Lucy Parker died on February 4, 1942. Both brothers had not learned of her death. His father, George McMillan Parker, a city detective, died in 1946 of an heart attack.

Pvt Parker is Memorialized on the Tablets of the Missing, Manila American Cemetery, Philippines. 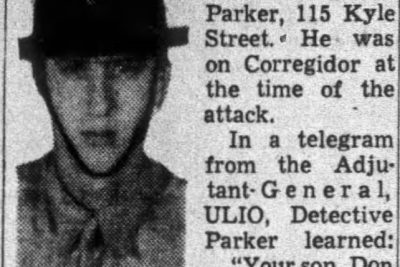 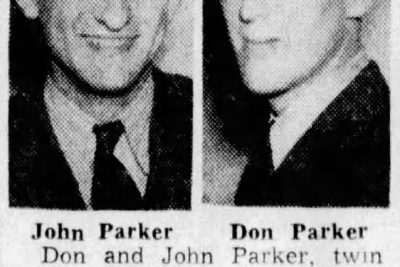