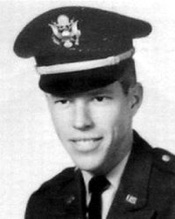 Captain John Wallace Haynes was born on August 31, 1945. He served his country in the Vietnam War in the United States Army, with Adv. Team 66, HQ, Military Assistance Command Vietnam Advisors. His tour began on February 22, 1971. On June 19, 1971, Capt. Haynes died in a vehicular accident in Dinh Tuong, South Vietnam. He was 25 at the time of his death. He is memorialized on the Vietnam Veterans Memorial on Panel 03W, Line 82.