John Warren Bailey served on the U.S.S. Porter (DD356). He died on 26 October 1942 and is listed on the Tablets of the Missing, Manila American Cemetery, Manila, Philippines.
Mother: Mrs. Sarah Jane Hale, Charleston

On 26 October, during the Battle of the Santa Cruz Islands, the Porter was fatally damaged by a torpedo and had to be sunk by another U.S. Navy ship. It looks like Bailey died in the attack. See:
http://www.history.navy.mil/photos/sh-usn/usnsh-p/dd356.htm 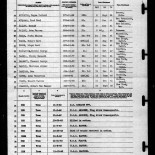 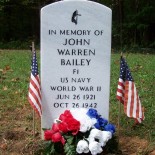