Messman John Starlyn Buckner was on board the American motor tanker MS Sunoil as it left New York on Mar 27, 1943 with 102,000 barrels of fuel oil. Bound for Halifax, Nova Scotia and Scotland, the ship was part of Convoy HX-231. By Apr 5th, after leaving Halifax, the tanker had developed engine problems and was forced to fall back (straggle) from the convoy. On the 5th, German submarine U-563 spotted the zigzagging Sunoil and fired three torpedoes, one of which hit. The Navy Armed Guards on board forced the u-boat to submerge, and a distress signal was heard by British ship HMS Vidette who came forward and averted another attack. Later that day, U-530 spied the tanker and fired a spread of three torpedoes. One hit and the ship stopped. After being hit by two more torpedoes, the ship sank quickly. A destroyer in the vicinity searched without success before returning to the convoy.
There were 43 Merchant Mariners and 26 US Navy Armed Guards on board; none survived. 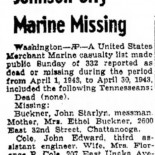