John Robert “Bobby” Stahr was born in Pawnel, Illinois. He enlisted on 15 July 1943 at Fort Oglethorpe in Georgia. He resided at Sullivan County, TN at the time of his enlistment.
Died non Battle in Taylorville, Christian, Illinois.
He was the son of Frank Stahr and Minnie Harris of Rolla, Missouri. Husband of Evelyn Bethard.

Taylorville, July 16 – Pvt. John Robert Stahr, 26, Marrisonville, died in St. Vincent’s hospital in Taylorville at 7:15 p.m. in a fall from a Wabash bridge construction at Palmer June 26. Private Star was on a 30-day furlough from Camp Custer Mich., at the time he fell from a scaffold.
Coroner Sidney Stilts said an inquest would be held after the arrival of army authorities from Camp Ellis.
Private Stahr was born Feb. 7, 1919 in Pawnee. He leaves his parents, Mr. and Mrs. frank Stahr, Morrisonville and his wife, the former Evelyn Bethard, Morrisonville.
The body was taken to the Bivin funeral home in Taylorville and arrangements are incomplete. 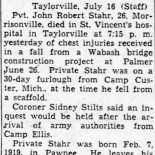