John P. Keys left Elizabethton shortly after the United States entered World War II. He, like millions of young Americans, joined the U.S. armed forces and journeyed to Europe, Africa and Asia to fight enemies on two fronts. And like so many of those young Americans, Keys never returned home. The pilot of a B-17 Flying Fortress with serial number 43-37865, Keys and seven members of his nine-member crew were killed in action after their aircraft was shot down during a bombing mission over occupied France near a small village called Perigny on Aug. 8, 1944. Now, 60 years later, the village is planning a memorial tribute to Keys and his air crew. Yann Thomas, a resident of Perigny, informed the Star of plans to memorialize Keys and the crew with a stone memorial on the 50th anniversary of their deaths on Aug. 8, 2004. Keys served as a pilot with the 100th Bomb Group, 349th Bomb Squadron crew flying a B-17 bomber nicknamed the “Varga Venus” (photo below) over occupied France and into Germany during 1944. Keys crew included flight officer and co-pilot, Elvin W. Samuelson on the bomber. The squadron included 2nd Lt. Patrick H. Lollis; 2nd Lt. Elton Dickens; Sgt. Frank O. Thomas; Sgt. Harry D. Park; Sgt. Peter P. Martin; Sgt. Gilbert A. Borba; Sgt. Joseph A. Costanza, and Sgt. Donald V. Rieger. Only waist gunner Borba survived after bailing out of the aircraft, and he was taken prisoner of war. Costanza was not on the flight. The Missing Air Crew report on the incident stated that Dickens bailed out but later died on the same day from a leg wound. The 100th Bomb Group of the U.S. Army Air became known as “The Bloody Hundredth”. Keys and his crew were on a bombing mission over occupied France near St. Sylvain when their plane was shot down near Perigny. According to the U.S. Army’s operations narrative of their mission, Keys’ B-17 was hit by flak in the number two engine roughly 90 seconds before unloading over an occupied area near Perigny. The village lies in the French province of Calvados – the historic province of Normandy – roughly 30 miles southwest of Caen. It is the province where U.S. military men hit the beaches of Normandy and Omaha on D-Day, June 6, 1944. Keys’ crew had a close call on returning to England from a bombing mission in late May. According to a United Press news report published June 2, 1944, the B-17 was “limping home” on one good and one disabled engine. Keys ordered the crew to “throw out everything that can’t shoot”, according to the report. The crew complied, tossing out all removable guns and ammunition as well as some of their clothing, according to the UP report. Thomas said he “threw out his pants, shirt and underwear, declaring, ‘My pants and my all, I give for my country.'” In 1943, the average life of an 8th Air Force B-17 crew was 11 missions. In 1943-1945, the 100th lost 177 aircraft missing in action plus 52 lost due to operational accidents, a total of 229. The 100th was not the Group with the highest losses in the 8th, but since its losses often came many at a time, it soon acquired the reputation of a hard-luck outfit and the name “The Bloody Hundredth.” John Perry Keys was the son of Mr. and Mrs. J.E Keys. A memorial service honoring Keys was held at the First Methodist Church in Elizabethton on April 25, 1948, according to county historical records. Beginning in May 1944, Keys and his crew flew bomb missions that struck munitions factories in Munich and Hamburg as well as oil refineries in Western Germany. They had flown 25 missions over enemy territory when they took off on Aug. 8, 1944, according to a flight history of the crew provided by the 100th Bomb Group Foundation’s Web site. The Foundation preserves the memories of veterans killed in missions over Europe during World War II. Costanza did not fly that mission. The memorial will have the names of all crew members engraved on a marble or bronze tablet and will be placed in front of the town hall of Perigny. World War II veteran and ex-prisoner of war, Wright Swanay, recalled meeting Keys while both were preparing to ship out to Europe. “I was in Salt Lake City, Utah in November 1943,” said Swanay. “John was a pilot, and we were being assigned to our crews. We never knew each other until then.” Swanay said once the men got their assignments, they shook hands and headed off. That was the last time he ever saw Keys. Swanay said Keys was one of three men he made a point to remember each Memorial Day as a veteran and fellow Elizabethtonian who answered the call to duty and gave his life for freedom. “I got shot down and they got shot down,” said Swanay, “and I was the one who came back.” 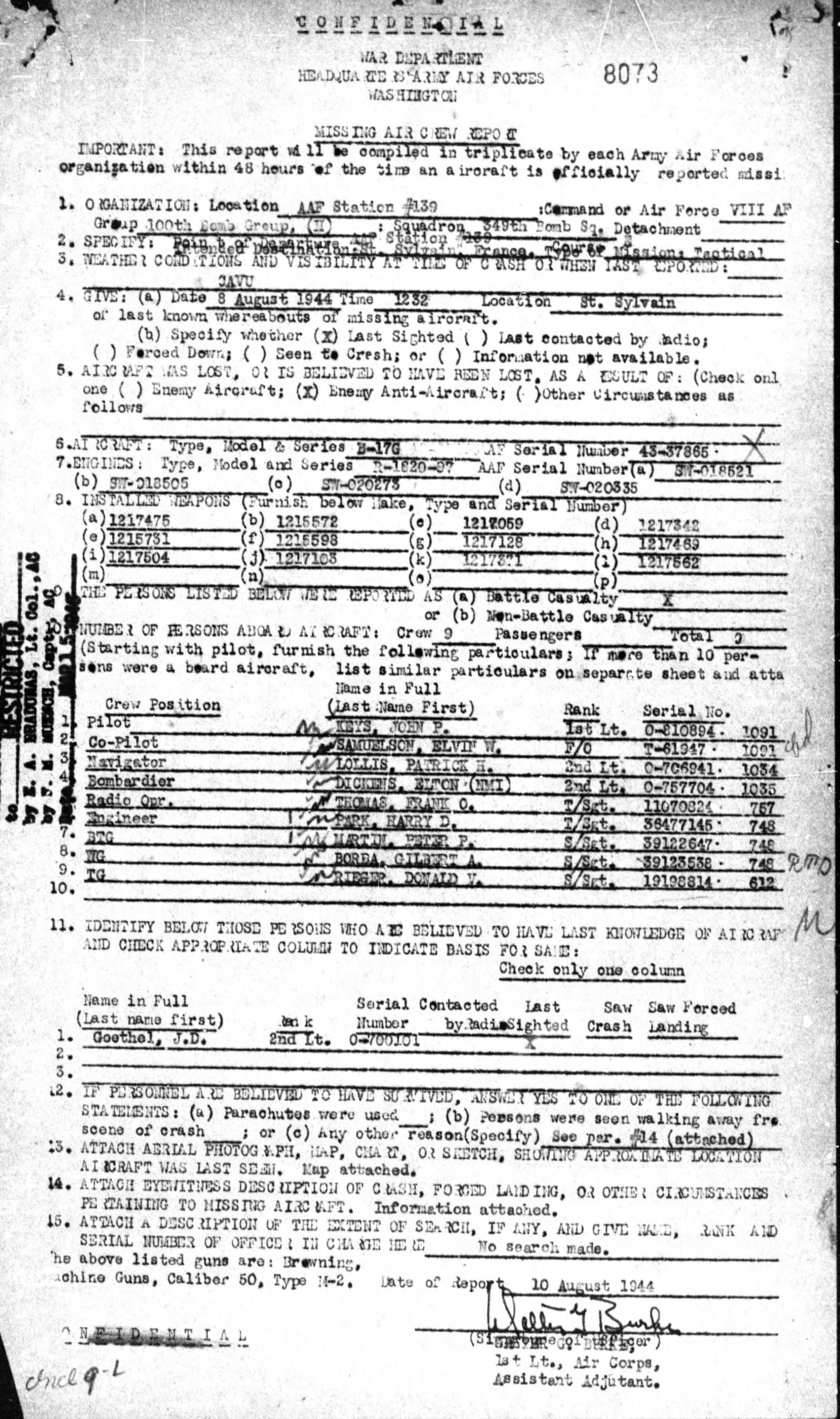 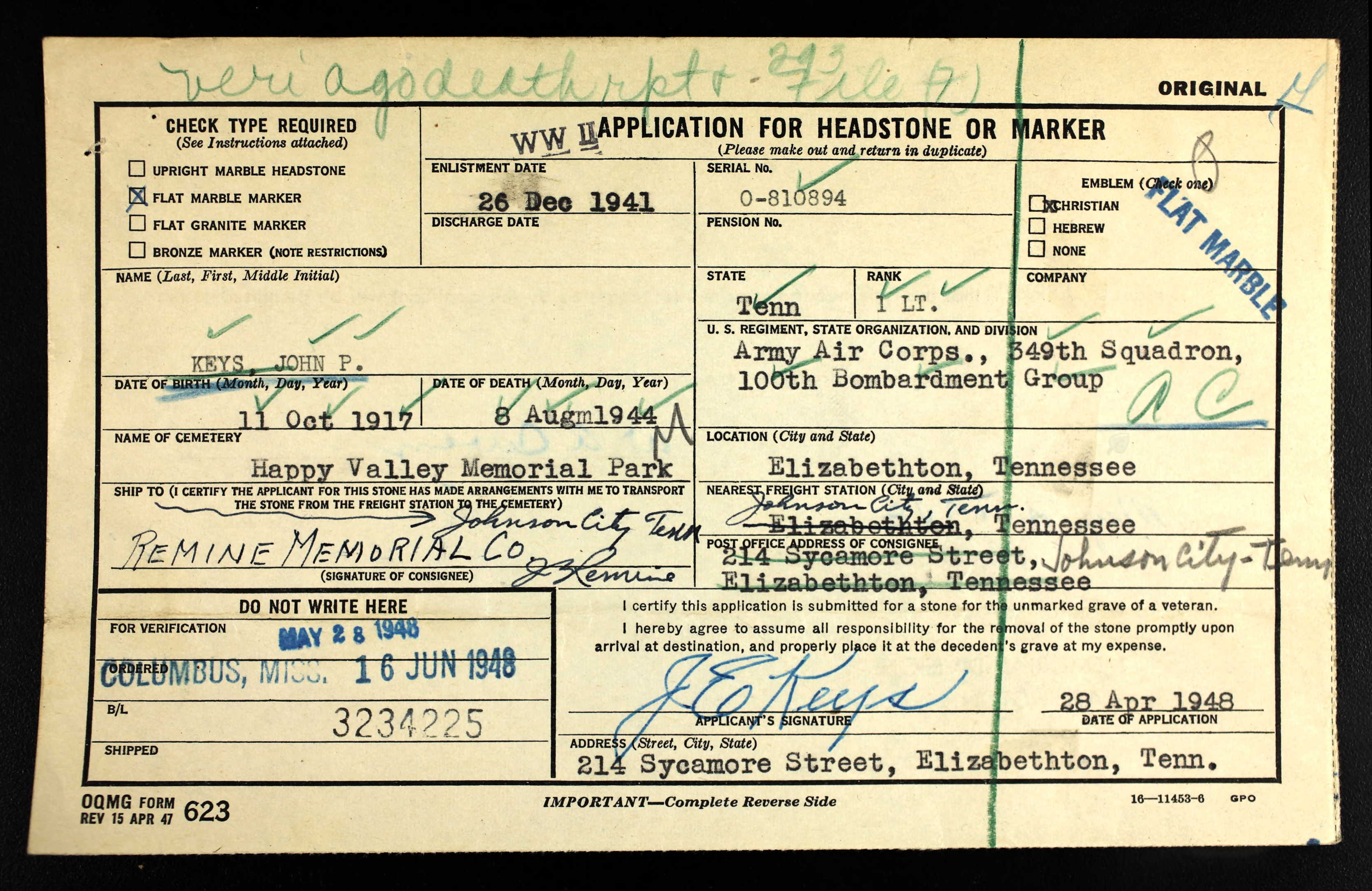 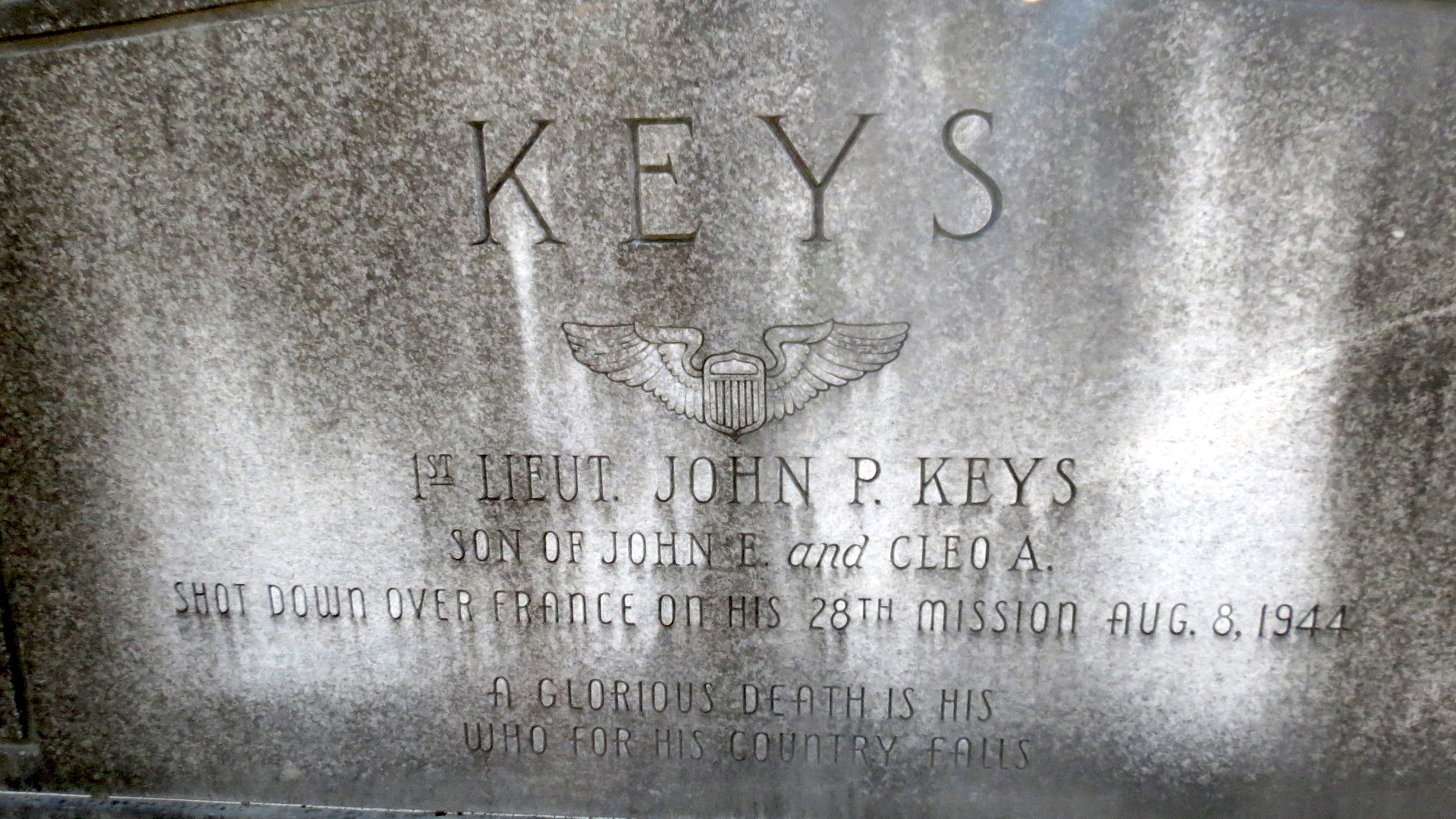 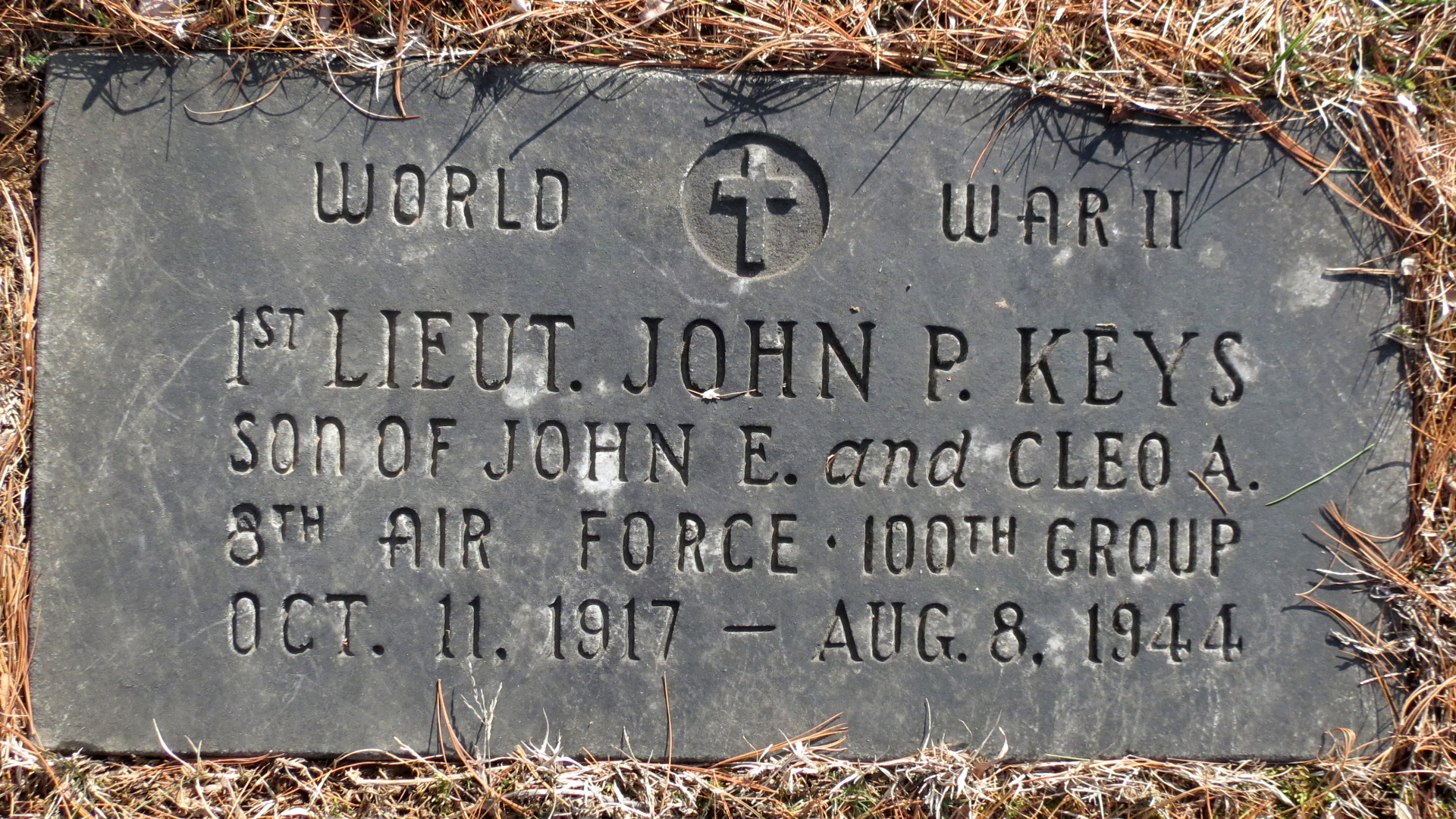 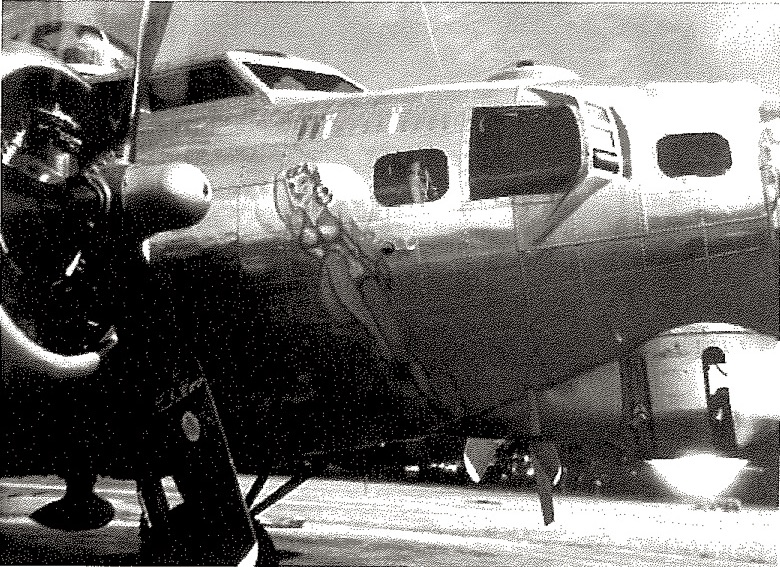 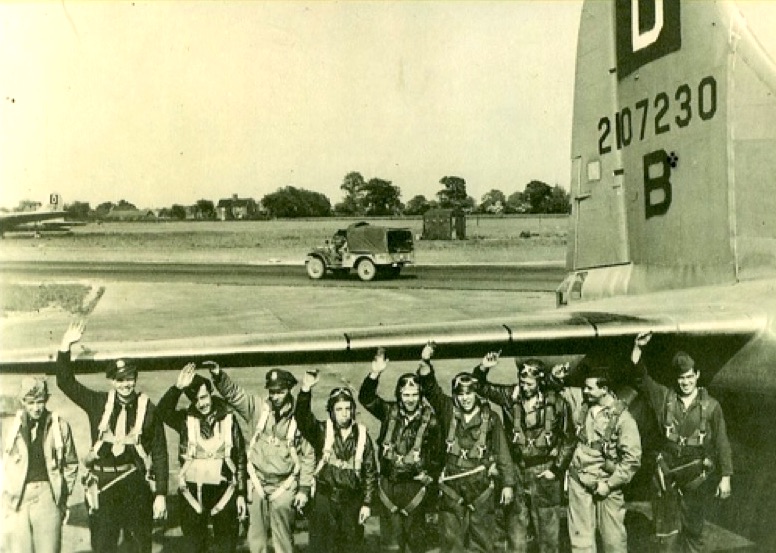 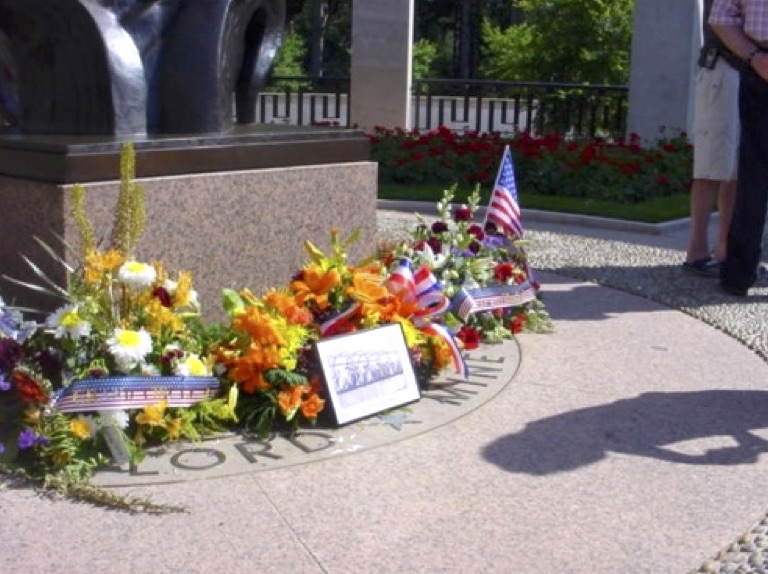 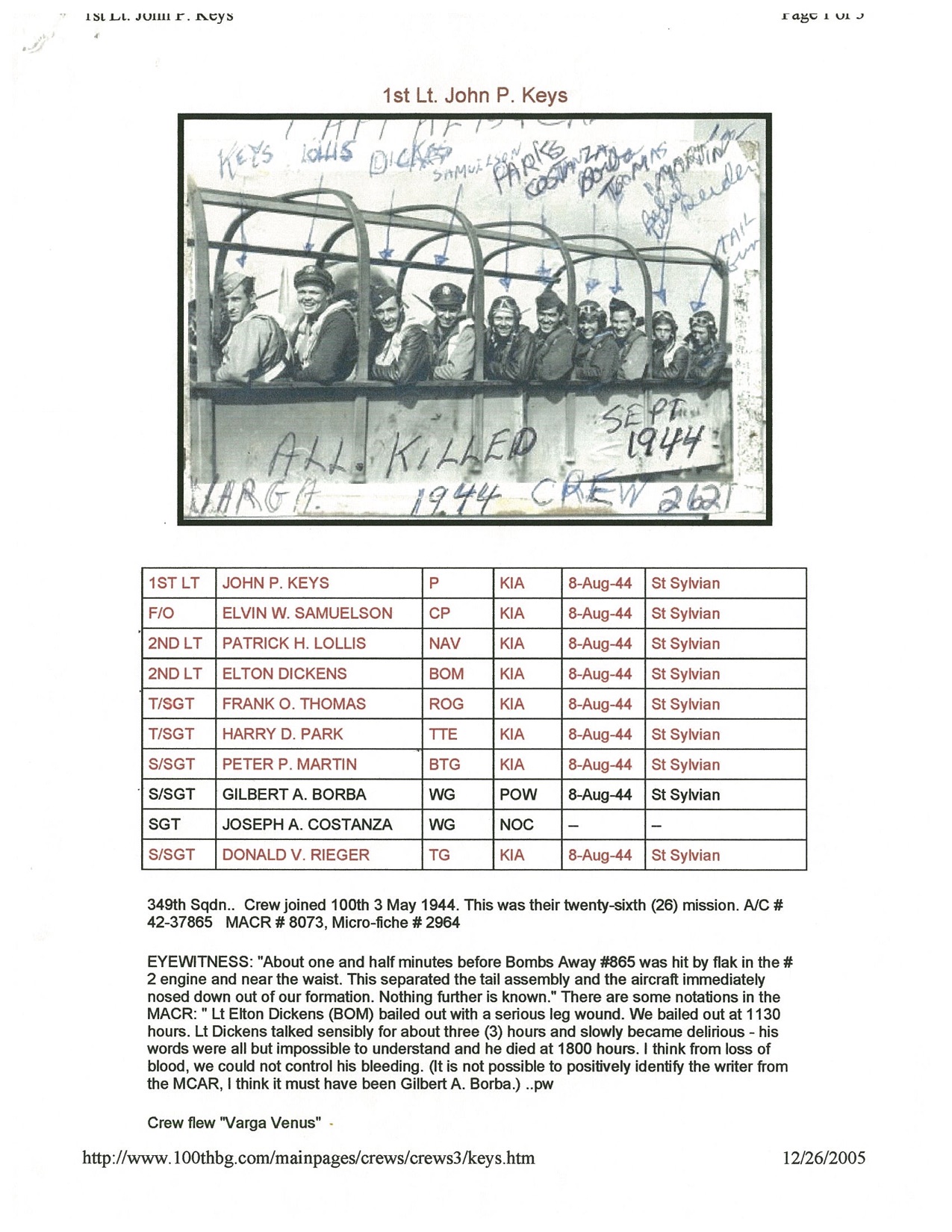 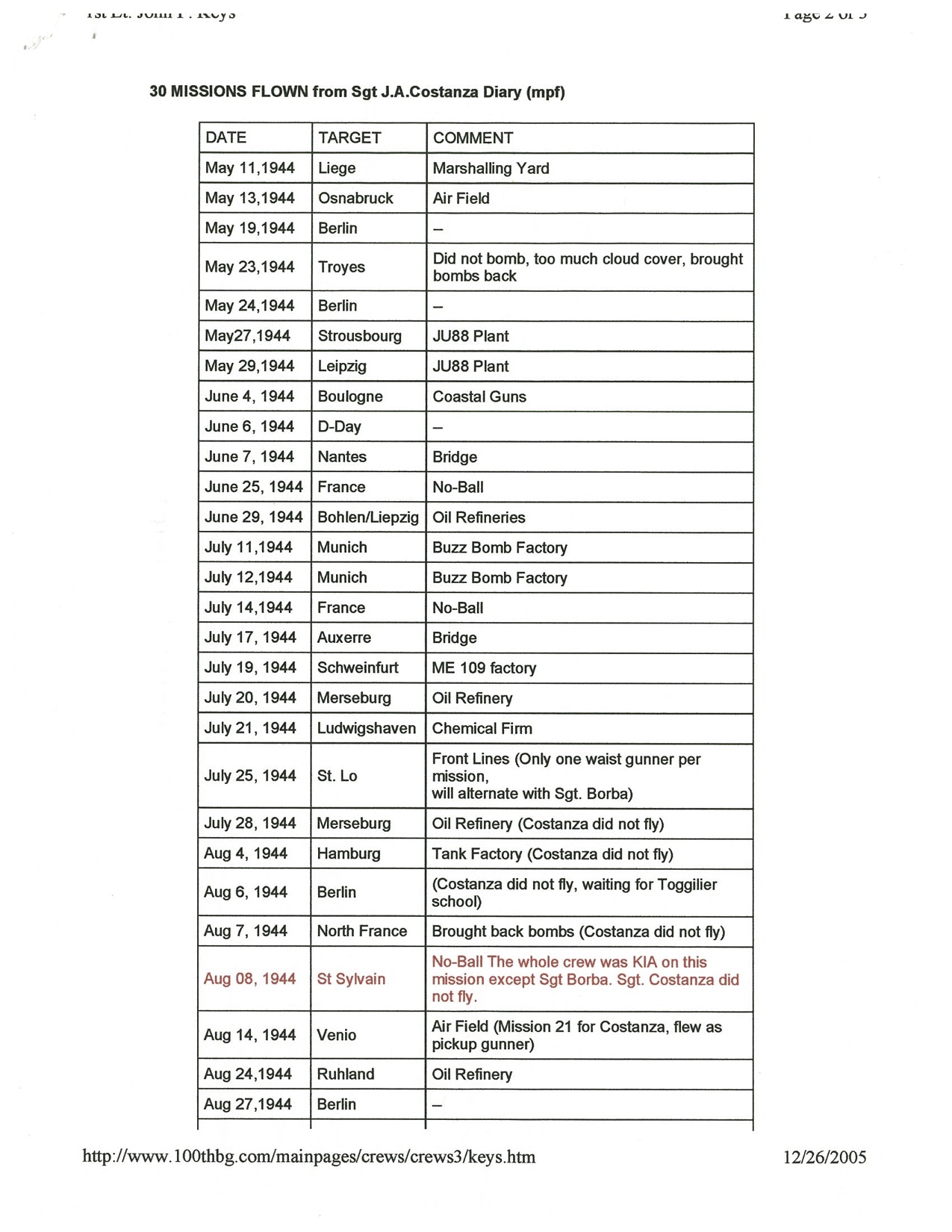 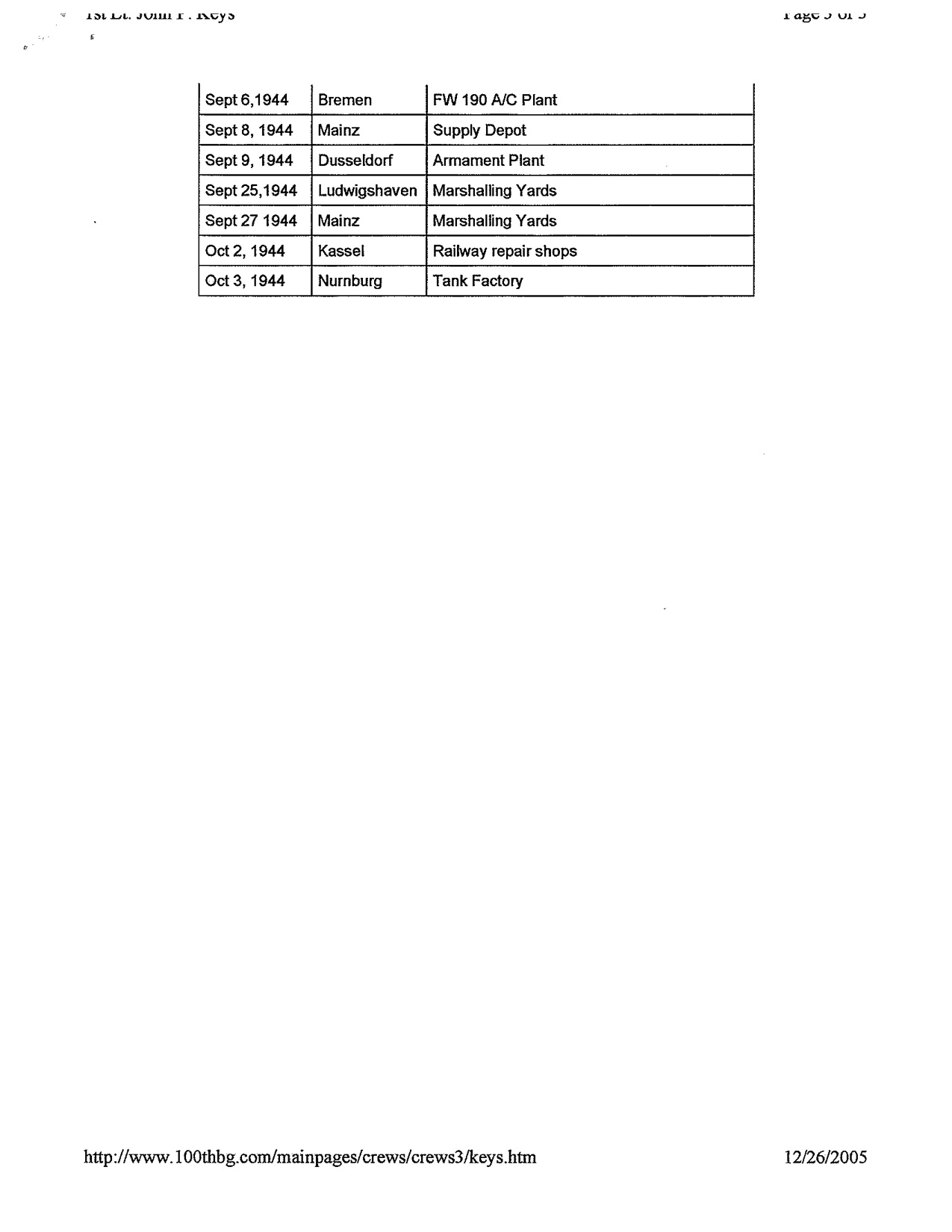