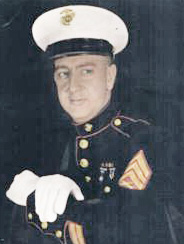 Captain John Patrick Ellis was born on January 27, 1936, and was originally from Cochran, Georgia. He served his country in the viet War as a 14-year veteran of the United States Marine Corps in MABS-36, MAG-36, 1ST MAW. His tour in Vietnam began on November 14, 1967. On February 28, 1968, Capt. Ellis was aboard a CH-46D helicopter of HMM-262 was struck by automatic weapons fire over Quang Tri, South Vietnam, while inbound to Khe Sanh on a recovery mission. The aircraft was downed by the enemy fire and exploded on impact, killing all 22 men aboard. Capt. Ellis is buried at Andersonville National Cemetery, in Andersonville, Sumter County, Georgia. The following are tributes left for Capt. Ellis:

5 Mar 2003
John Patrick Ellis wasn’t just a man, he was a son, a brother, a husband, a father and a uncle. All who knew and loved him will always remember his smile and his talent on many musical instruments. He lived life to the fullest … not only did he live it, he loved it. Even knowing his time in the Marine Corps may one day cost him his life. When that time came he lost his life defending the country he loved. He left behind a very saddened family but now we still remember him and love him after all these years. He is gone but never will he be forgotten. Recently, on July 25, 2002, we lost his brother who is my father – Mr. Martin Luther Ellis. Until the day he died he always remembered and loved his brother as if he were still here. So in loving memory of Captain John Patrick Ellis and Martin Luther Ellis … we will always hold them close to our hearts and memories.
Love to the both of them. The Williams family
Placed by his niece, Cynthia Williams
19 Dec 2006
Daddy, I love you, and I miss you.
From his daughter, Fay Ellis

John was a good Marine Corps Officer . We were both Mustang Officers. I saw him one night when we were stationed at different places in Vietnam. That was about 52 years ago but I have never forgotten him. I went to the Vietnam Wall once and left a note at the wall.
–Submitted by William Lykens
First Lieutenant
United States Marine Corps- Retired 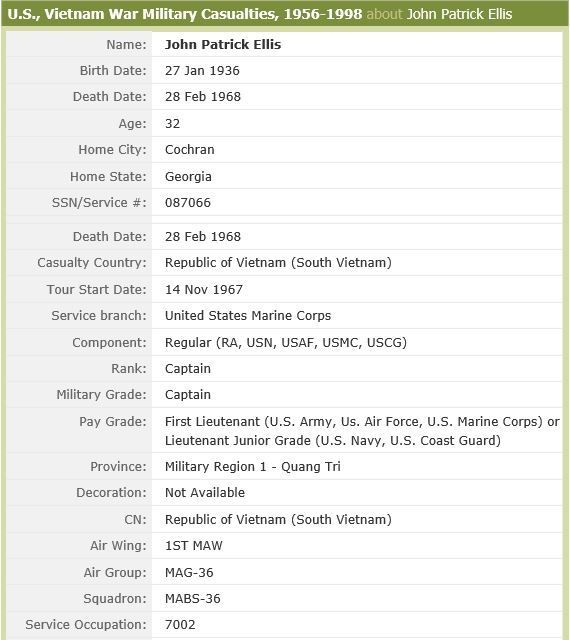 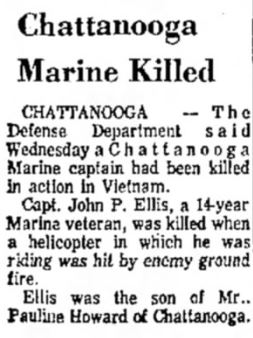