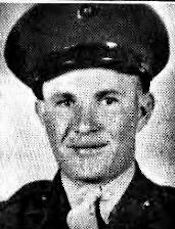 PFC Lewis entered the service on January 1, 1922 at Parris Island, South Carolina, went to Camp Pendleton, California, and served in the South Pacific Theatre. He was killed in action on New Georgia, Solomon Islands. He attended Raleigh County schools. Memorialized at Manila and at Ritchie Cemetery, Elizabethton, Tennessee.

The Battle of Bairoko was a battle between American and Imperial Japanese Army and Navy forces on 20 July 1943 during the New Georgia Campaign in the Solomon Islands during the Pacific War. In the battle, U.S. Marine Raiders—supported by two U.S. Army infantry battalions—attacked a Japanese garrison guarding the port of Bairoko on the Dragons Peninsula on New Georgia. The day-long assault on well-prepared Japanese defensive positions by the Americans was unsuccessful. After calling-off the assault, the Americans withdrew to nearby Enogai. The American forces remained in the Enogai area until the end of the New Georgia Campaign. The Japanese used Bairoko to resupply and reinforce their troops who were guarding an airfield at Munda Point on New Georgia. After the U.S. and its allies successfully captured the airfield, the Japanese evacuated New Georgia and abandoned Bairoko on 24 August.

Total American casualties were 49 killed, 200 wounded, and 10 missing, the vast majority of them suffered by the raider battalions. PFC Lewis is one of the missing.