Pvt Bean was brought to the Station Hospital at Fort Oglethorpe, Georgia where he died of acute respiratory failure. He was the husband of Zelma A. Bean and is buried at New Gray Cemetery, Knoxville, Tennessee.

He was the son of Jesse W. and Mattie W. Bean. He was the brother of Irene Bean and Raymond Bean. As a teenager, he worked as a clerk at the Iron Works, where his father worked as a laborer. Before joining the military, he married. He enlisted in the military on April 13, 1944 in Camp Shelby, Mississippi. 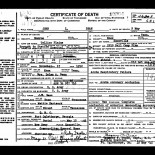