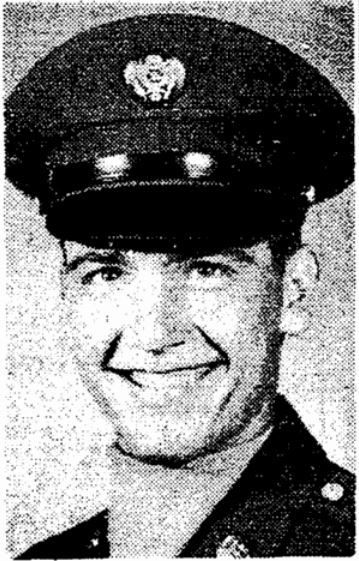 “I just don’t see no need of the war in Vietnam.” These were the words of Mrs. Mildred Morgan, 1209 W. Fourth Ave., upon hearing about the death of her 18 year-old son, Pvt. John Henry Morgan, in Vietnam.

According to the telegram she received, Pvt. Morgan was killed Thursday, “as a result of wounds received from metal fragments from friendly artillery.” His mother said that from what she understood, her son was returning from a patrol and was mistaken for an enemy soldier. Mrs. Morgan said her son never said too much about the war, but in one letter he said it was like “hell.”

Young Morgan had talked about building a home for his mother and three sisters when he returned. “I just don’t see no need of the war in Vietnam. It doesn’t seem like they’re going to quit till they send all of these young boys over there to get killed,” Mrs. Morgan said.

Pvt. Morgan, who attended Farragut High School, had been in the Army a little over a year and in South Vietnam barely one month. Besides his mother he leaves his father, Raymond Morgan, Concord; three sisters, Mary Rosetta, Sarah Loretta and Grace Marie Morgan, and one brother, Charles Clifford Morgan, Concord. 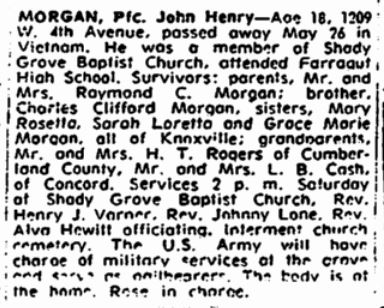