Seaman 2c John Harrison Balthrop, US Navy, was born December 1899 in Robertson County, Tennessee to Walter Christian Balthrop and Rosa Anne Head Balthrop. He was a resident of Robertson County and by 1910 was living on Clay Street in Nashville with his parents and sisters, Amanda, Lula, Zeporah and Maggie.

John moved to Knoxville with his mother and there enlisted with the United States Navy on November 17, 1916. He was inducted into service November 23, 1916 in Nashville and received training in Norfolk, Virginia. Seaman 2c Balthrop was stationed aboard the USS Seattle.

According to the Naval History and Command of the USS Washington/Seattle, the USS Seattle was laid down on September 23, 1903 at Camden, New Jersey and launched in March 1905 as the USS Washington. The ship was renamed as the USS Seattle on November 9, 1916 just weeks before John Harrison Balthrop joined the US Navy. The Seattle was taken out of reserve status and recommissioned for duty as flagship of the Destroyer Force. In April 1917, war was declared and the US was drawn into the First World War. As a result of the declaration of war, the Seattle arrived in New York in June 1917 and was fitted for war service as a convoy to the European front. The Seattle saw its first battle with a German U-Boat later that same month. The USS Seattle was at port in November 1917 when Seaman 2c Balthrop requested a leave from the ship and went into Brooklyn and checked into a hotel room.

Due to an error his body was first sent by train to Nashville and after discovering the error was rerouted to his mother in Knoxville. Funeral services were held on November 27, 1917 at the home of his mother and buried with full military honors. On his headstone his name is spelled as Barthrop.

“Body of Seaman is Shipped Here. Search Is Made for Mrs. Anna France, Relative.
The Western Union Telegraph co. has received a telegram from New York addressed to Mrs. Anna France, Nashville, Tenn., which stated that the body of John Harrison Bathrop, seaman, second class, United States navy, had been shipped to her. The telegram was from the United States naval hospital of Brooklyn. The body reached Nashville this morning at an early hour. The telegraph company has had its messengers visit all parts of the city. Any information in regard to Mrs. France will be appreciated by the telegraph company.”

“Knoxvillian is claimed by Gas. J.H. Balthrop Meets Accidental Death in New York. Enlisted in Navy Nov. 17, 1916- Was on Leave of Absence.
The body of John Harrison Balthrop 18 years old, son of Mrs. J.J. France, 107 East Depot Avenue, who died in a hospital at Brooklyn, N.Y., was brought to Knoxville Monday and taken to the residence of Mr. and Mrs. France. According to information received in Knoxville, young Balthrop died from the effects of gas in his room. He was enlisted in the United States Navy and had been granted a short absence from his ship at the time he registered at the Brooklyn hotel. Balthrop enlisted in the navy at the Knoxville recruiting station, Nov 17, 1916 and was sent to the training station at Norfolk. He was later assigned to the U.S.S. Seattle. The deceased was a native of Robinson County, Tennessee but had resided in Knoxville for some time before enlisting in the navy. He is survived by his mother and the following sisters: Mrs. H.C. George of Hopewell, VA., Mrs. Sam Salbie, of Coopertown, Tenn., Mrs. Ziparah Balthrop, of Springfield, Tenn., and Miss Maggie Balthrop, of Coopertown, Tenn. The body of Balthrop was found in the New York hotel, Nov. 17. It was sent to Nashville through mistake and then forwarded to Knoxville. The funeral will be held at the residence of Mr. and Mrs. France, East Depot Avenue, this afternoon at two o’clock. Rev. U.S. Thomas, pastor of Bell Avenue Baptist Church, will officiate. Interment will be in the National Cemetery. Uniformed soldiers will act as pall-bearers, and Boy Scouts will escort the body from the home to the cemetery.” 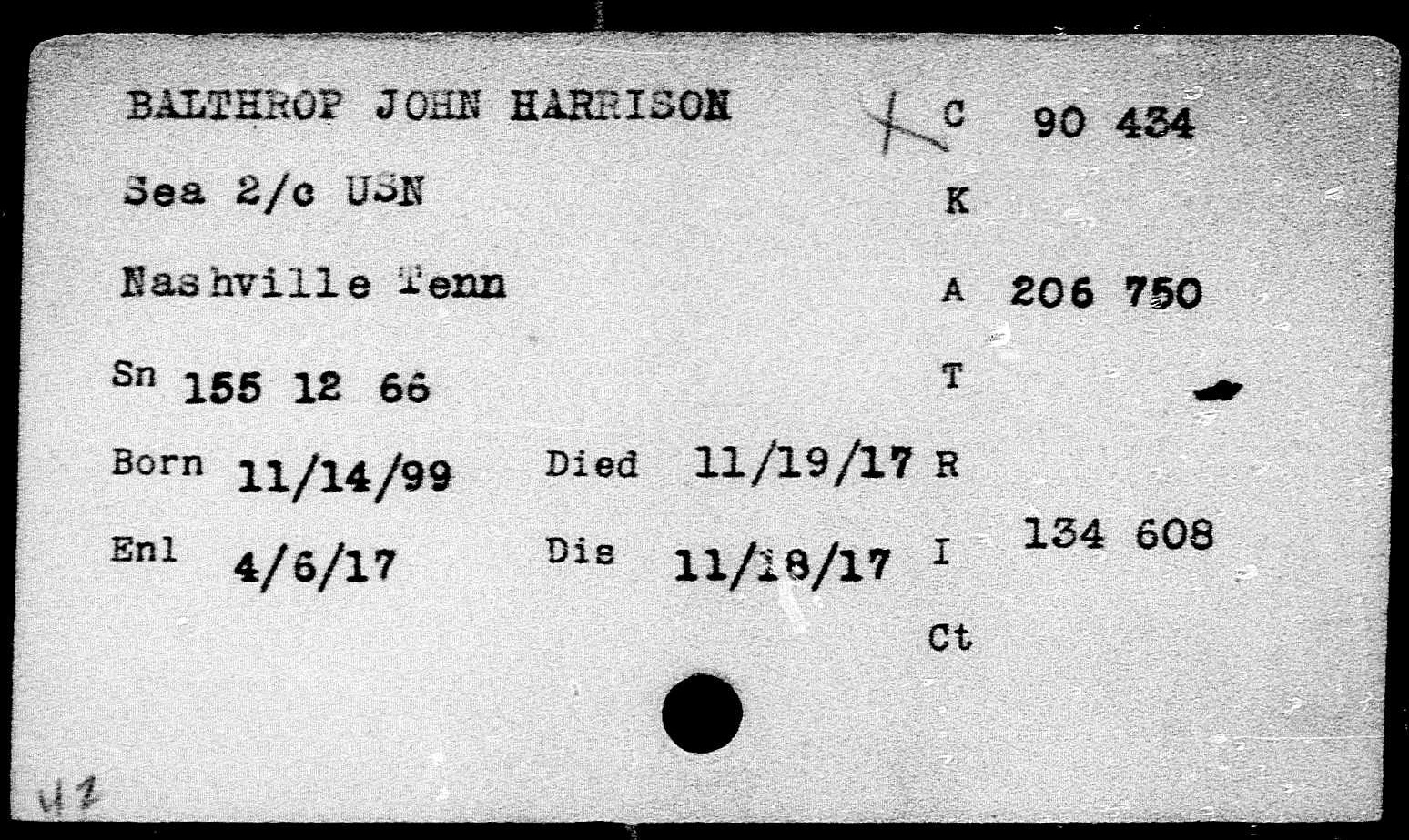 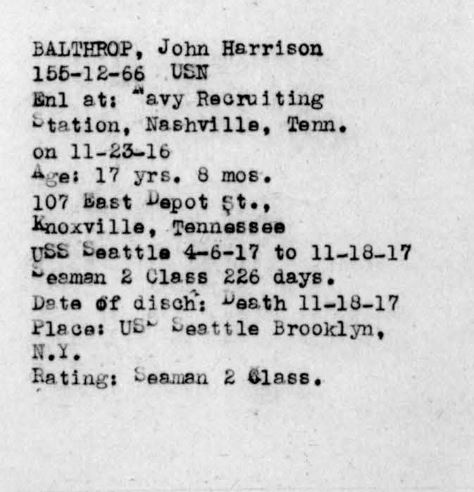