John David Stallings was the son of Love S. Stallings. He was married with Edith Jane Stallings. He enlisted on June 10, 1944 in Camp Shelby, MS
Died in Germany

He was repatriated back to the United States after the war and funeral services were held January 16, 1949, at Rocky Hill Baptist Church. Burial Rocky Hill Cemetery, Knoxville.

The Knoxville News-Sentinel, May 27, 1945
Pvt. John D. Stallings, son of Mrs. Love Everett, 1122 Middlebrook Pike, was killed in action in germany, April 13, his family has been notified. Pvt Stallings entered service in June, 1944, and went overseas in November. He had received the Purple Heart for wounds received in January. He graduated from Farragut High School and was a member of the Crichton Memorial Baptist Church in Concord. Besides his mother, he is survived by his wife, Mrs. Jane Stallings; three daughters, Shirley, 3, Mary Lou, 20 months, and Patricia, seven months; two sisters, Mrs. Wanda Joiner and Jennieve Everett; and a grandmother, Mrs. Callie Stallings, all of Knoxville. Pvt. Stallings was 23 years old. 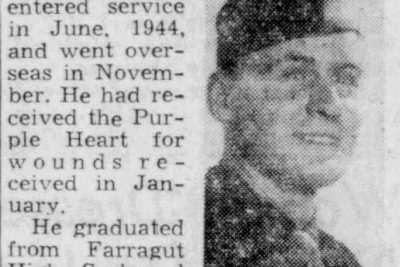