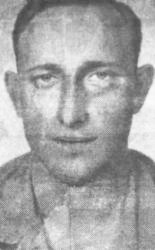 “John Sexton took me under his watchful eye when I arrived in NAM back thirty-three years ago. March 3, 1969. He shared with me the little things to watch for, trip wires, cracked branches, dirt that was recently moved, underneath layed a deadly booby trap. I knew John for only a short period of time, but he will always be with me. John Sexton was a man to be very proud of, his life shortened by a WAR we still can’t figure out. May he rest in peace.” -David Endean

“Sexton, 22 Killed In Vietnam”
“A 22 year old Knoxville soldier, Army Spec-4 John David Sexton, 22, was killed Thursday in Davtieng, South Vietnam, after he accidentally walked into a friendly ambush force barrier, his family was notified Tuesday. He was the son of Mrs. James Buin Sexton, Hendrons Chapel Road, and of the late Mr. Sexton. Specialist Sexton was drafted into the Army a year ago and left for Vietnam on December 5, 1968. He had been in Vietnam with the 27th Infantry, 25th Wolfhound Division, for the past five months. He attended Young High School. Before entering the service, he worked for Sexton Bros. Masonry Construction Co., owned by his brothers, Leonard H. and Charles L. both of Knoxville. He was a member of New Hopewell Baptist Church.
He was survived by mother, Alene Hamby Sexton brothers, Charles L. and Leonard H. Sexton, Knoxville three nieces three nephews grandparents, Mrs. Ethel Waldrop, Florida, Cecil Hamby, Tellico Plains, W.F.Sexton, Dalton, GA. Funeral service 330 p.m. Saturday, Berry Chapel, Rev. Dean Buchanan officiating. Interment, Holston View South. Pallbearers will be military. Full military honors at the grave. The family will receive friends 7 to 9 p.m. Friday at Berry’s.” (Knoxville Journal)