He served on the U.S.S. Meredith (DD434)
The U.S.S. Meredith was lost in action in the Solomons. Three torpedoes and two bomb hits delivered the death blow to the Meredith on October 15, 1942, as it was convoying a tug, U.S.S. Vireo (AT-144) and its gasoline-laden tow off San Cristobal Island in the Solomons. John Owen was lost at sea and officially declared dead on 16 October 1943. 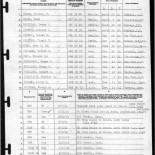