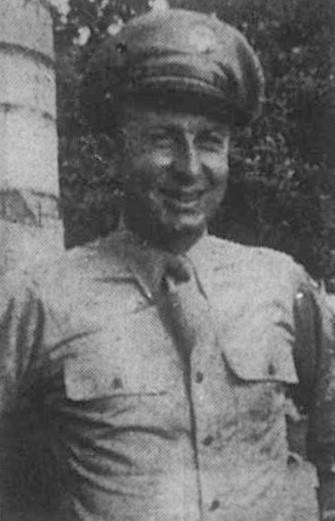 T/4 John was killed in Germany. He is buried at Bethesda Cemetery, Morristown, Hamblen County, Tennessee.

Rogersville Review, June 7, 1945
Sgt. Joe Johns, son of Mr. and Mrs. Lee Johns of Morristown was wounded March 20th, in Germany and died April 4th, 1945. He had been in the service since April 21, 1942. He served 18 months in the Pacific before being sent to Europe. He served in the CA – “AA” until last winter when he was put in the infantry replacement. He had six weeks training and landed in Europe in February.
Joe was a graduate of Rogersville high school and attended LMU where in his senior year he was voted the most popular boy, and also was the highest basketball scorer. He was a member of the Gills Chapel Baptist church. In a recent letter to his mother he said: “If we don’t meet again on this earth there is a better World waiting for us.” He is survived by his parents, Mr. and Mrs. Lee Johns, his wife, Mrs. Hazel Logan Johns of Scurry, Texas; one sister, Mrs. Harve Pyne Jr., Rogersville; two brothers, Cpl Willard Johns of Camp Shelby, Miss., and Lee Johns Jr., of Morristown.
Capt. Claude R. Craft in a letter dated April 25, 1945, wrote the following to Mrs. Johns, wife of Joe:
My dear Mrs. John,
You have already been officially informed by the War Department that your husband, Joe F. Johns, technician fourth grade, died in Germany on the 4th of April, 1945 of wounds received in action on the 20th of March 1945 in Germany. Your husband is buried in an American cemetery in Germany, a Protestant chaplain officiated at a military funeral.
Your husband’s company was assigned the mission of taking a German-held air field in the vicinity of Seife, Germany, on the 20th of March, 1945. DUring the afternoon as the attack pressed on the enemy laid down intense artillery and rocket barrages. It was during the shelling that your husband was hit by shrapnel from an enemy rocket. He was immediately evacuated to the nearest hospital where he later died. As his commanding officer, I want to assure you that he received the best medical attention possible and he died as a soldier.
His presence in the line always an inspiration to his comrades and they miss him deeply. Through me, his commander, all men of his unit wish to extend their sympathy to you in your bereavement and to assure you that his death was not without purpose but that he made a real contribution to the final victory over the enemy.
Capt. Claude R. Craft