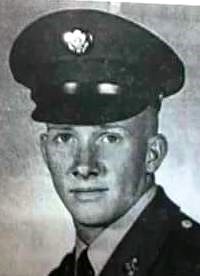 Joe Edward “Edd” Griffith was the son of Mr. and Mrs. Sylvester Griffith of Brimstone Road, Robbins. He attended Robbins High School for three years and joined the Army in 1964, later obtaining his high school diploma. He re-enlisted for six years in January, 1966, and had four more years to serve. Sgt Griffith was married to the former Jo Ann Clements of Coffee Springs, Alabama and was the father of a 9-month-old son, Joey. His wife and child lived in Alabama. He had previously been in Vietnam for seven months but was returned to the United States and was stationed for a year at Fort Rucker, Ala., before being sent back to Vietnamon December 24.