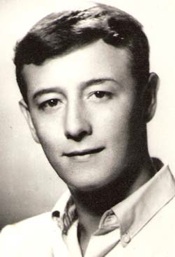 Specialist 4 Jimmy Ray Wolfe was born on April 30, 1946, and was originally from Cleveland, Tennessee. He served his country in the Vietnam War in the United States Army, as a radio teletype operator in 125th Air Traffic Control Company, 12th Aviation Group, 1st Aviation Brigade. His tour in Vietnam began on July 30, 1965. On April 13, 1966, SP4 Wolfe was killed in a mortar attack at Tan Son Nhut Air Base outside Saigon, Gia Dinh province, South Vietnam; the attack killed seven American soldiers and wounded hundreds more. He was 19 years old at the time of his death, and was the recipient of the Purple Heart medal. SP4 Wolfe is buried at Fort Hill Cemetery in Cleveland, Tennessee, and is memorialized on the Vietnam Veterans Memorial on Panel 6E, Line 112. The following are tributes online for SP4 Wolfe:

Saturday, June 24, 2006
We worked together in Vietnam.
Thoughts of Jimmy
The night that Jimmy Ray died, I was supposed to work that shift, but Sgt., Rogers changed our shifts. That night was the first time the Gooks had ever mortered Tan Son Nhut Air Force Base. When this was taking place, a morter hit out side of the van that we worked in. It shattered the whole side of it. Jimmy Ray must have pannicked and opened the door to the van. He ran about a block to the mess hall, when a morter hit right behind him. This was how he was killed. This has bothered me for all of these years. I keep wondering if I would have done the same if our shifts had not have been changed. Jimmy Ray was 19 and I was 30 years old.
Clifford Lindsay

Thursday, May 24, 2001
Jimmy Wolfe was my friend. We went over together with our unit. He was a friend to everybody. He always made you look at the bright side, even when it was dark. He always tried to keep you laughing. We all cried when he died. God bless his family.
Allen Neighbors, Friend

10 Feb 2007
I just want to say Jimmy Ray was a fine young man and I am happy to call him a good friend. He played Herb Albert in the White Elephant (that is what our living quarters were called) and he was always happy. I will never forget Jimmy Ray because he was so young and the only guy we lost in my one year in Vietnam. I hope and pray to see Jimmy in heaven and laugh again. Thank you.
From a friend, Donald E. Coffey

30 May 2016
I was part of the 125th Air Traffic Control company and only knew Jimmy for a couple of months in Saigon. I was shipped to DaNang and later to CamRanh in September or October 1965. I was an airplane mechanic. At the time, we were billeted at Tent City B in Tan Son Nhut. Jimmy was a pleasure to be with, even just to be anywhere close to him. He was a one man morale booster to the whole unit even if you never got to be real close friends. I’ll never forget the first morning we were at formation for roll call. When the sergeant got to Jimmy’s name the answer he got was not the ordinary response of “PRESENT” that everybody gave but rather a load wolf howl.Everyone cracked up and the Sarge only smiled and shook his head.I believe that everyone present that day knew right away that Jimmy was a very special person. I was on temp. assignment with our DeHavilland airplane,a U6 Beaver in Nha Trang, when my pilot, Mr. Goodwin came there to fly us back to CamRanh. He informed me that Jimmy had been killed. I felt depressed and saddened. Now that I am a born again Christian, I know I am going to see Jimmy again in Heaven and Jesus too will be smiling when He hears the beautiful wolf howl.
Carlos Ibarra

13 May 2021
I knew Jimmy at Ft Benning, Ga as a member of the 72nd air traffic control co (designated the 125th air traffic control co in Vietnam). I was also under attack on April 13 1966. Jimmy was a friendly person that was always joyful and friendly. He lifted your emotional feelings just by being in his presence. I was saddened to hear that he was killed in the attack on Tan Son Nhut. I will always remember Jimmy. God bless his family.
James Crane