A native of Hawkins County and 1966 graduate of Church Hill High School, Henry was employed by the Kingsport Press Inc. before entering service in September, 1968. He left for Vietnam in February and had been awarded a Purple heart for wounds received before the last action. 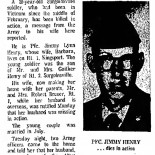