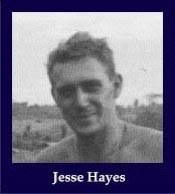 Specialist 4 Jesse Boyd Hayes was born on January 30, 1946, and was originally from Grandview, Tennessee. He served his country in the Vietnam War in the United States Army, as an infantryman in B Company, 1st Battalion, 35th Infantry, 4th Infantry Division. His tour in Vietnam began on September 10, 1968. On January 9, 1969, SP4 Hayes was killed while under hostile conditions in Pleiku province, South Vietnam; he was 22 years old at the time of his death. SP4 Hayes is buried at Mount Zion Cemetery in Cumberland County, Tennessee, and is memorialized on the Vietnam Veterans Memorial on Panel 35W, Line 60.

The following is a tribute left online for SP4 Hayes:

Jesse, I just want to say that I am proud to have served with you in Viet Nam and to have had you as a friend. You were a good soldier and you died valiantly, without any suffering. I was with you on that fateful day in January ’69 and you are with me today. You are a true hero. May you rest in peace.