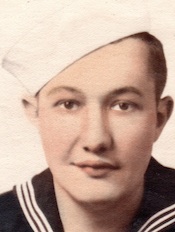 Jerry Spencer Monds is memorialized on the Tablets of the Missing in Honolulu, HI. He is also remembered with a headstone at Arlington National Cemetery in Arlington, Virginia. He was killed during the battle of Okinawa. He served on the USS Drexler (DD741).

The USS Drexler was sunk off Okinawa by three Japanese suicide planes. The ship went down in less than two minutes after the third hit, killing 138 crew members and wounding 52 others.