Another young Knoxvillian has died in combat in Vietnam. PFC. Jerry Lynn Noe, 18, son of Mr. and Mrs. Ernest Shields Noe, 1733 Mississippi Ave., was killed last Friday, his parents have been informed. He was one of the four Noe sons, all in service. Pfc. Noe apparently fell in the wipe-out of the two “lost platoons” of the 173 Airborne Brigade on a jungle ridgetop. He was the 17th Knox Countain to die in Vietnamese action. Yesterday it was reported that Marine Sgt. Sam Raymond Jones was the 16th Knox Countian to die there, also last Friday.

“A Mr. Wilson came out from the Army yesterday and knocked and said he wanted to see my husband.” Asid Pfc. Noe’s mother today. “I told him I knew it was about Jerry and that Jerry was dead. He hesitated and said yes, Jerry was dead.” Mrs. Noe said Jerry’s first and last letter from Vietnam arrived June 8, on his father’s birthday. “He said best wishes, but said he couldn’t send his dad a card because he didn’t have one. He wrote one page on June 3 and the other two on June 4,” said Mrs. Noe.

“Jerry said he had already stood guard all night on top of a big tower. He said he was going into the jungle to a training school for one week and then would go back into the field for four months. “He said Vietnam was an interesting place, but that it already seemed like he had been there two months although some of the boys said the time would pass fast.” Jerry was a seasoned paratrooper, with numerous jumps, although he had no previous combat experience. He and his brother, Pfc. Gale Noe, 20, left here together May 27 by air for California after spending leave at home. Gale was headed for Thailand, which adjoins Vietnam.

Gale’s twin brother, Pfc. Dale Noe, has been in Korea for three months. The fourth brother, Pfc. Robert S. Noe, 21, spent last weekend at home after a stay in Korea. Mrs. Noe said Jerry’s last letter “said he loved us all and sent his love to his sister, Linda Kay. She’s 15.” Mrs. Noe explained that Jerry wasn’t engaged but had been going with one Knoxville girlfriend.

Mrs. Noe said that after the Army man’s call, the family received a wire saying that the son died of wounds received in a fire fight. 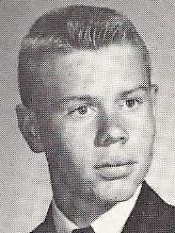