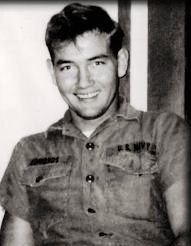 Builder 2nd Class Jerry Baxter Edmonds, Jr. was born on September 25, 1948, and was originally from Crossville, Tennessee. He was the son of Jerry Baxter Edmonds, Sr. and Glendon Stewman Edmonds. BU2 Edmonds served his country in the Vietnam War in the United States Navy, in Naval Mobile Construction Battalion (NMCB) 74, 3rd Naval Construction Brigade, US Naval Forces Vietnam. He was a two-year veteran of the Navy when his tour in Vietnam began on July 15, 1970. On December 31, 1970, BU2 Edmonds was killed under hostile conditions in Bien Hoa province, South Vietnam; he was 22 years old at the time of his death. BU2 Edmonds is buried at Green Acres Memorial Gardens in Crossville, Tennessee, and is memorialized on the Vietnam Veterans Memorial on Panel 5W, Line 16.

The following is a tribute left online for BU2 Edmonds:

Jim Bryant
Last Ride With A Good Friend
I had known J.B. most of my life having been raised in the same community. He was a good friend and a good person. A day or so before he left Crossville headed for Viet Nam he came riding up our driveway on his horse. I saddled my horse and we went for a long ride in the Homestead community. We rode slowly, talking about just about everything you could imagine. Even though J.B. was about 5 years older than me he had always treated me as a good friend, and I thought of him in the same way. I will never forget that ride and I think of him often. The day his dad told me that he had been killed was also a day I’ll never forget. Your memory lives on J.B. in family and alot of friends. You will never be forgotten.
Friday, October 14, 2005 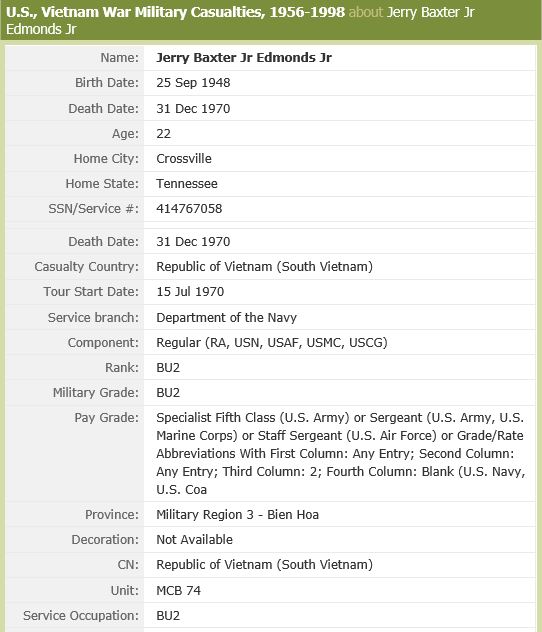