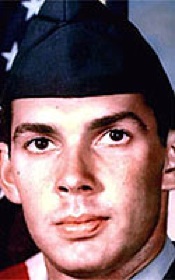 Army Master Sgt. Davis was assigned to the 3rd Battalion, 5th Special Forces Group, Fort Campbell, Kentucky. Davis was one of three U.S. Special Forces soldiers and five Afghan opposition fighters who were killed when a 2,000-pound satellite-guided bomb from a U.S. B-52 friendly fire missed its intended target north of Kandahar. Jeff was a 1981 graduate of Elizabethton High School in Elizabethton, Tennessee, where he played on the football and basketball teams. He also attended Lees-McRae College in Banner Elk, North Carolina, where he played on the football team and studied nursing at East Tennessee State University. In August of 1984 he enlisted as a medical specialist and served in Korea for three years. Jeff is remembered for his fondness for motorcycles. Friends can see him now on his motorcycle, with his vest and his skullcap and a big grin on his face, but he was one of the best soldiers. His awards and decorations include The Purple Heart Medal, Two Meritorious Service Medals, Two Army Commendation Medals, The Defense of Saudi Arabia Medal, The Liberation and Defense of Kuwait Medal, The Special Forces Tab, The Ranger Tab, The Combat Infantrymans Badge, The Combat Medic Badge, The Master Parachutist Badge, The Military Freefall Parachutist Badge. Capt Jason Amerine commanded the team that was hit and said that he didnt want his men remembered as a detachment that was taken out by an errant bomb. They cannot be remembered that way. They are the best that America has to offer. Biography courtesy of Brenda Normandin

He was repatriated back to his hometown of Elizabethton and was laid to rest at Happy Valley Memorial Park, Elizabethton, TN.

Son of William Lon and Linda Curd Davis, Watauga, Tennessee. Husband of Mi Kyong Yu Davis. 2 Children and son-in-law of Song R. and Suk Yi Yu Kimpo, Korea. His middle name was Donald, and everybody who knew him referred to him as “Donny”.

Silver Star Citation:
“The President of the United States of America, authorized by Act of Congress of July 9, 1918, takes pride in presenting the Silver Star (Posthumously) to Master Sergeant Jefferson Donald Davis, Unites States Army, for gallantry in the face of overwhelming odds and direct hostile aggression as the Team Sergeant of Operational Detachment Alpha 574 (ODA-574), 3d Battalion, 5th Special Forces Group (Airborne), on 5 December 2001, in support of Operation Enduring Freedom in Afghanistan. Master Sergeant Davis’ exceptional courage, dedication to mission and personal sacrifice directly contributed to the current success of both Chairman Harmid Karzai and the Northern Alliance’s defeat of Taliban Forces. Master Sergeant Davis’ remarkable performance and selfless commitment to his fellow comrades in arms, serves as the standard for others to emulate. Master Sergeant Davis’ actions while engaged in combat operations during Operation Enduring Freedom reflects great credit upon himself, the 5th Special Forces Group (Airborne), and the United States Army.” 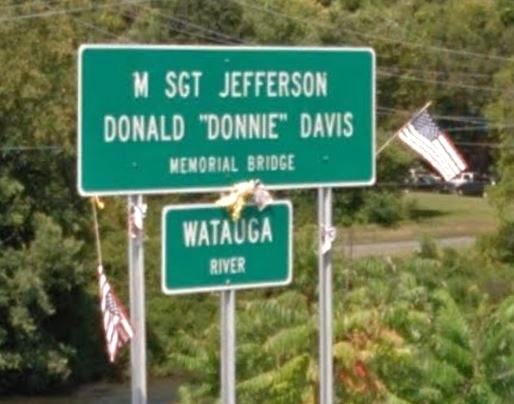