2nd Lt Horowitz was taken Prisoner of War at the fall of the Philippines. He was transported aboard the Oryoku Maru to Japan where he died 20 January 1945.

ETVMA board member Jeff Berry delivered the following remarks on Horowitz’s service and sacrifice at the 2017 Memorial Day Reading of the Names at the East Tennessee Veterans Memorial:

For a few moments I would like to remember the story of one of the names listed here on these pillars. As you listen to this story please picture this man as one of us not just words on a page. His dreams were real, his hopes were real, his pain and suffering were real, and his death defines his legacy.

Jay Malcolm Horowitz was, as his friends described him, the happy Jewish boy from Sweetwater, Tennessee. Born December 30, 1918 and raised in Brooklyn, New York. He was the son of Benjamin F. Horowitz and Ruth R. Cahn Horowitz. He was born with Russian, German, Austria, and New York descent. He was one of two sons born to Ben and Ruth. His father was a clothing merchant in New York and moved to Sweetwater, Tennessee where Jay graduated Sweetwater High School May 23, 1936. By August 1936 he was enrolled at the University of Tennessee.

He was a senior in 1940 when he enrolled at the University of Miami at Coral Gables, Florida. He was one of 44 who would become the Inaugural class of 40-A. They were representatives of the United States Army Air Corp and Pan American Airways who had descended on Coral Gables for instruction on celestial navigation. His classmates would later go on to participate in Doolittle’s Raid on Japan or lose their life aboard a B-17 defending their country.

From August 12, 1940 to November 12, 1940 he studied and learned how to navigate using the stars. He earned his wings upon graduation and was stationed at March Field, California or Ft. Douglas, in Salt Lake, Utah. While there they honed their bombing skills and kept a close ear to the radio and world events. War was in the air.

He and some of his classmates had become a part of the 93rd Bomber Squadron, 19th Bomber Group, United States Army Air Forces. Their orders late October 1940 were to take the new fleet of B-17’s to the Southwest Pacific Theatre, specifically Clark Field.

Not as infamous as the attack on Pearl Harbor on December 7, 1941, Clark Field in the Philippines was attacked the very next day on December 8, 1941. The attack decimated the majority of the air fleet and the ones not damaged were sent to Australia.

Jay without a plane to navigate remained on the Island and was not part of the evacuation to Australia. He occupied his time by helped keep the Japanese Imperial Army at bay until the United States Forces were surrendered in April 1942. Jay would assist with artillery and other missions.

Jay would surrender to the Japanese Imperial Army and would begin his journey on what is now known as the Bataan Death March. The march was a harsh, inhumane, 65 mile trail from the main island of Luzon to the prison camps at San Fernando. One survivor tells of the hot humid conditions without food and little water. He remarked that along the 65 miles he never lost sight of a dead American or Pilipino soldier who either died from starvation, exhaustion or were executed because they could not keep up because of the fatigue and the conditions they were subjected too.   Jay survived.

Jay would find himself moved to the Cabanatuan Prison Camp where he would watch many more friends and prisoners suffer and die over the next 32 months. The only correspondence Jay was ever able to get out was during this time. The Knoxville News Sentinel reported on August 28, 1943 that Jay had penned a letter to his parents. He told them he was well and was treated fair. I wonder if this was a comfort to his mother or did she know the real truth behind the censored letter? Still Jay survived.

On December 12, 1944 Jay was selected as one of 1,169 prisoners moved to Bilibid Prison in Manila. On the following day the prisoners were marched through the streets of Manila to Pier 7 at Manila Bay. The civilians watched on helplessly and feared the Japanese soldiers if they tried to offer even a small cup of water. Jay and the others were boarded on the Oryoku Maru a Japanese cabin-type vessel designed for luxury travel. There were no markings to distinguish the ship from any other Japanese vessel and anti-aircraft weapons were clearly visible.

There were three cargo holds about 20 feet below the top deck. The prisoners were placed in the holds with no water or food, no air, and no facilities to use the rest room. The men were back to chest with the next person. They were exhausted, emaciated, sick, and were experiencing temperatures at 100-100 degrees Fahrenheit. Some lost their senses and began to lash out at their fellow mates. Death began to take its toll. Jay survived.

At 3:00 o’clock am the Oryoku Maru left port and headed out across Manila Bay toward the China Sea. It was at that point the sound of aircraft engines pierced the night. Aircraft from the USS Hornet pierced the night with gunfire and bombs. The attack lasted until 4 pm that afternoon. Some of the bullets pierced the bodies of those below deck yet Jay survived.

They remained aboard the Oryoku Maru until the following day. No food, No water, men paralyzed with fear and screaming out in agony. The announcement came and the hatch was opened. Officers first then the others. You will swim to shore. Some of these tired barely alive men were forced to strip of their clothing and shoes; only their undergarment remained. They were forced off the ship into the water of Subic Bay below. Some too weak to swim clung to items in the water or drowned. As the officers, including Second Lieutenant Jay Horowitz, lead the way 300 yards to shore they were met by Japanese soldiers on the shore. The officers who were told to go first were met with machine gun fire. Above the place from the USS Hornet returned somehow a very astute lead pilot recognized the swimming bodies below as fellow Americans and called off the final bombing run for the moment and many were saved. Through the swim, the aborted air raid and the machine gun fire Jay survived.

Once on shore they were herded into tennis courts on Olongapo Naval Station. The tennis courts were surrounded by chicken wire. No food or medical aid was provided for the first two days. They were held on the tennis courts for five days and six nights ;( December 15-December 21, 1944) undernourished, exposed to the elements, and suffering from their captivity. I wonder if on a clear night if Jay looked to the heavens and for a brief moment lost himself in the stars he was so acquainted with from his early days in the armed forces. A roll call was taken on the tennis courts. It was determined that of the 1,619 prisoners who had sailed from Manila’s Pier 7 on December 13th less than 1300 remained More than 300 American prisoners died in a 38 hour period from suffocation, starvation, drowning, and cold blooded murder. Through the heat, starvation, exposure, and exhaustion, Jay endured.

From there Jay and the survivors were loaded onto trucks and hauled back to San Fernando. After a couple of days there in the jail and jail yard they were loaded onto boxcars so crowed t again there was no fresh air-120 men per car. The 18 hour train ride ended at San Fernando La Union, a port on the China Sea. It was there that they would spend Christmas Day. Each prisoner was given one rice ball with compotes. Jay survived.

December 27, 1944, the prisoners embarked on two different ships, the Brazil Maru and the Enoura Maru and joined up with other ships heading for Formosa (current day Taiwan). They arrived on January 2, 1945 after a journey with no food and cramped, unsanitary and inhumane conditions. At this point all prisoners were moved to the hold of the Enoura Maru. The hold had not been cleaned from the last voyage with men and horses. There they remained for a week until the silence of the waves against the ship and the churn of the engine was interrupted again by a familiar sound. Bombs and gunfire filled the air and the hold of the ship. Between 350 and 400 men were killed and many others injured. There was no aid, no medicine, no supplies except dirty rags. For three days after the raid men dead and dying were held below deck. The dead were removed and stacked on the pier like cord wood to be cremated and the survivors were transferred to the Brazil Maru. It had been one month since they left Manila Bay. On January 13, 1945, Jay weakened and worn from his journey survived and boarded the Brazil Maru.

The Brazil Maru departed for Japan on January 13, 1945. Half of their number had died. The weather had changed and now Jay encountered the bitter winter weather. The soldiers were cold, half naked and their ranks diminished daily; 10-15 per day in the beginning and reaching a maximum of 40 dead per day a few days prior to arrival in Japan. Jay clung to life

On January 23, 1945 after 1,021 day in captivity the interpreter called “roll out your dead.” The frail, emaciated, lifeless body of Jay Horowitz, the happy boy from Sweetwater, was carried out on the deck of the ship. His clothing was stripped for the benefit of the survivors below and a Navy Corpsman cast him overboard into the cold water of the East China Sea. The sea received his remains and he slipped quietly under the water to his rest. 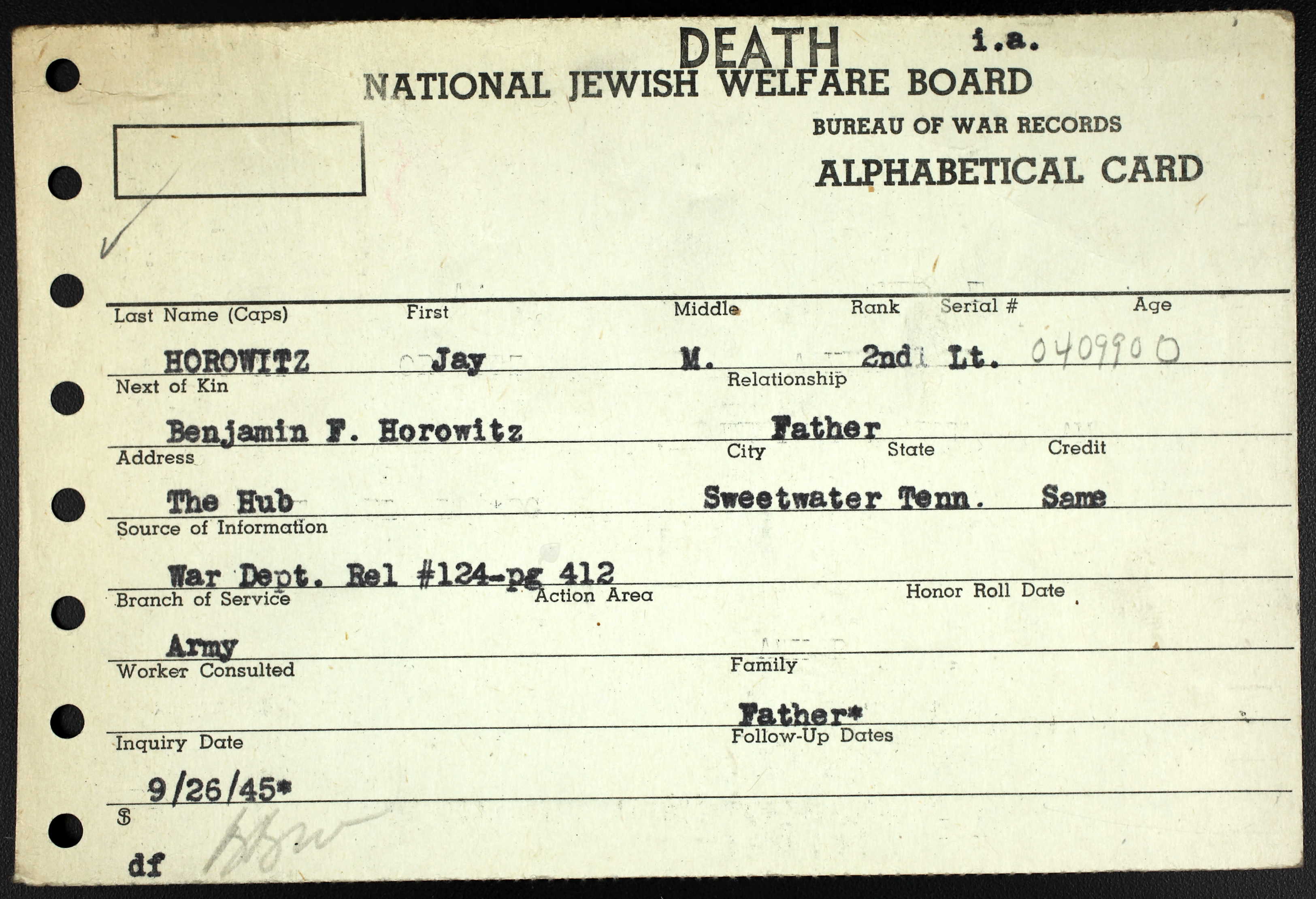 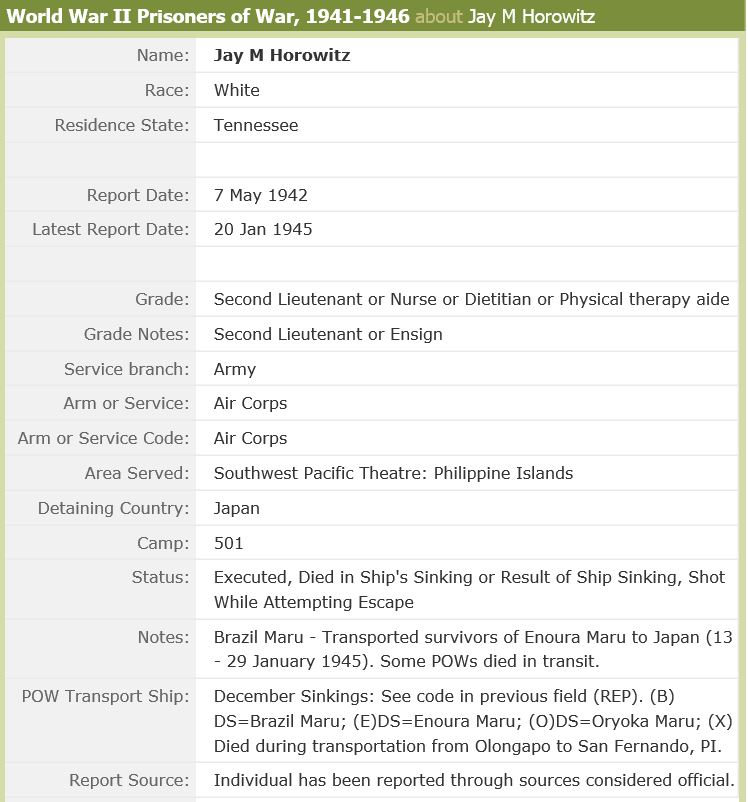 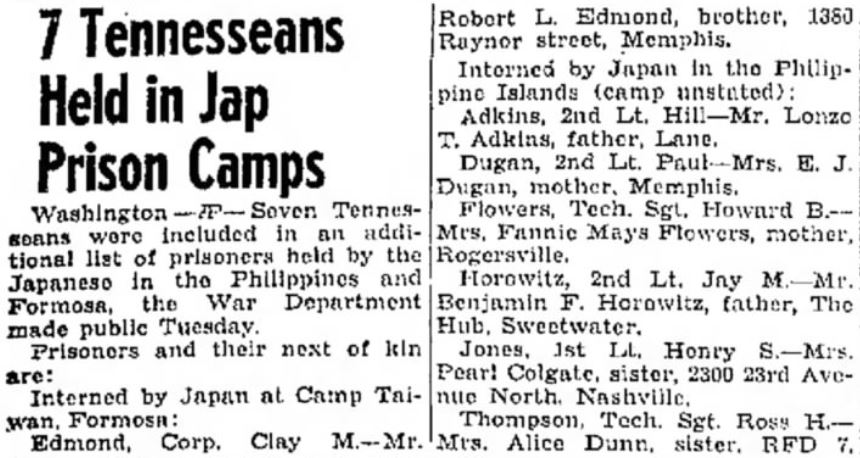 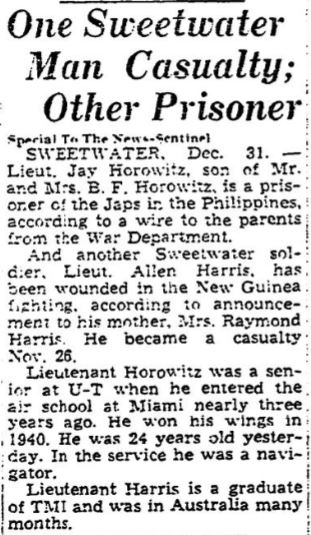