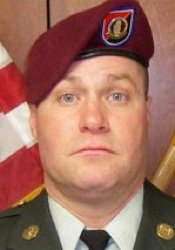 Sgt. 1st Class Jason Omar Bradley Hickman, 35, of Kingsport, Tenn., was a combat engineer. He was the first U.S. Army Alaska soldier to die this year. Fort Rich spokesmen said Hickman was wounded Thursday at Combat Outpost Bowri Tana, Afghanistan. The base was attacked Jan. 7 by insurgents firing small arms as well as the vehicle with the bomb. He died later that night en route to Forward Operating Base Salerno, the Army said.

In a statement issued Monday evening, Gov. Sean Parnell said Hickman’s service to his country will be remembered.

“Sgt. 1st Class Hickman was a noble soldier, and his death is a terrible loss,” Parnell said. “His honorable service to our country will always be remembered. I encourage all Alaskans to join Sandy and me in keeping his family and fellow soldiers in their thoughts and prayers.” Hickman joined the Army in April 1999 and had served as an engineer at Fort Bragg, N.C., and in a recruiting battalion in Wisconsin. He had also served in Iraq before joining the 4th Brigade Combat Team at Fort Richardson in May 2008. The brigade deployed to Afghanistan in February and March 2009.

He was a 1992 graduate of Dobyns-Bennett High School, Kingsport, TN. He is buried in Tahoma National Cemetery in Kent, Washington.