James Walter Lunsford was the son of Harvey Carl Lunsford and Estelle Goins.

Second Lieutenant Lunsford, “JW”, was the instructor navigator of a B-26 Invader bomber with the 8th Bomber Squadron, 3rd Bomber Group stationed at Kunsan Airfield (K-8), South Korea. At 11:25 p.m. on April 6, 1954, his aircraft was returning from a reconnaissance mission and disappeared from radar. He was listed as Missing in Action while participating in aerial support over Korea. He was presumed dead on April 12, 1954, when his aircraft could not be found.

Lt. Lunsford also earned a Purple Heart, a Korean Service Medal, the United Nations Service Medal, the National Defense Service Medal and a Korean War Service Medal. He was also heavily involved in working with orphaned children during his tour in Korea.
The flight on which he was killed was to be one of the last flights before his tour ended.
-Submitted by David Liner, nephew

The Chattanooga Times, April 10, 1954
Second Lt. James W. Lunsford was reported missing in Korea on April 6, and while extensive search operations are being carried on, no further information has been received, his mother, Mrs. William Thomas of 3620 15th Ave., has been notified.  Maj. Gen. John H. McCormick, director of military personnel at Washington headquarters of the U.S. Air Force, has promised full assistance and has sent his “sincere sympathy during this perios of anxiety.”Lt. Lunsford, navigator, bombardier, and radar man for the Air Corps. Has been in Korea since last July. His sister is Mrs. C.H. Liner of Lakeview, Ga. He is a graduate of Central High School and attended the University of Chattanooga three years before enlisting in the Air Corps in September of 1950. 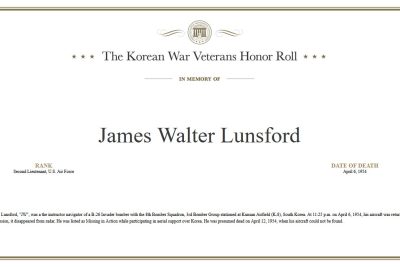 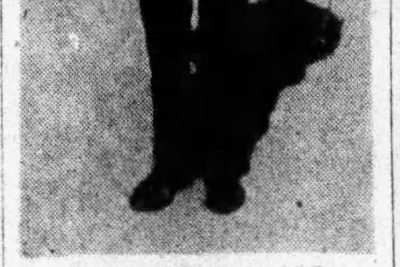 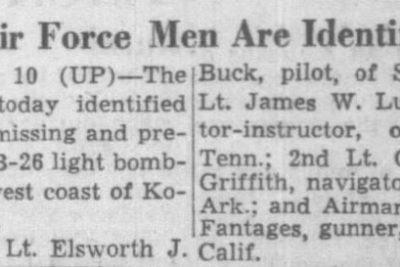