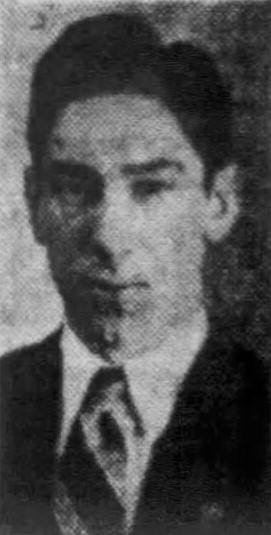 Seaman 1c James William Greene U.S. Navy Reserve, was assigned to the Naval Armed Guard aboard the Liberty Ship Joseph Wheeler. The Joseph Wheeler was bombed and sunk in the harbor at Bari, Italy in the Adriatic Sea area on 2 December 1943. KIA Crew 26, AG 16.

On the 2nd of December 1943 the Allies had been pushing to get supplies into Italy. The port of Bari, Italy was the site of a concentration of 30 Allied ships unloading supplies on this date. On this afternoon a 1st Lt Werner Hahn flying a Messerschmitt 210, flew two high passes over the port and reported the concentration of shipping.

Field Marshall Wolfram von Richthofen, commanding Luftflotte 2 recommended an attack to Field Marshall Kesselring. He thought he might manage to gather 150 JU 88’s for the attack, in the event, 105 was all he could muster. His aircraft were ordered to fly east to the Adriatic, then turn and approach Bari to the west, the Allies no doubt would anticipate any German air raids to come in from the North. The aircraft would drop Duppel, thin strips of tin foil to confuse the defensive radar. Parachute flares would be dropped to light up the targets in the harbor at about 19h30 ( 7.30 PM , ) then the JU 88’s, would attack at a low altitude, hoping to avoid Allied Radar installations.

The German attack was a complete surprise. 30 freighters and tankers were at the brilliantly illuminated docks in Bari, discharging ammunition, bombs, gasoline, and other supplies needed in the drive north. About 20h30, aircraft engines were heard, and winches stopped as stevedores searched the moonlit sky. Guns on all the ships were manned, and gunners waited for the command to open fire; ships at Bari were instructed not to fire on attacking aircraft until a designated gun ashore opened the action by firing tracers. The next moment parachute flares lit the harbor and the planes were overhead. The Bascom’s guns let go, and in a second or so half a hundred guns poured shells into the sky as the first stick of bombs hit the Norwegian freighter Lom. She rolled over and sank with her crew of 23 men. The Samuel Tilden, which had just arrived at Bari, had a bomb go down her stack and explode in the engine room. Incendiaries set fire to her cargo of gasoline and ammunition. Men went overboard to escape the flames.

Direct bomb hits made raging infernos of the John L. Motley and Joseph Wheeler. Crewmen on the John Bascom tried to fight fire on the Motley, until the Bascom had a stick of bombs walk up her deck from stern to bow, with hits in number five hold, the boat deck, and number three hold. Officers and men rescued the wounded, got the only serviceable lifeboat into the water, and pulled away. By that time the harbor was filled with wreckage and flaming oil burned many men as they tried to swim away from wrecked ships. A bulk gasoline pipeline and supply were severed and the gushing fuel ignited, engulfing other ships.

Just as the Bascom boat reached the quay, the John Motley and the John Harvey both exploded. The John Harvey had been carrying a secret load of mustard gas that was released by the explosion. The terrific blast lifted the stern of the nearby Lyman Abbott out of the water and rolled her on her port side with decks ripped open. The Joseph Wheeler, hit at the same time as the Motley, blew up next, and the British Fort Athabaska, beside her and carrying two captured 1,000-pound German rocket bombs, caught fire, blew up, and sank. Forty-four men out of her crew of 56 were killed.

By that time, ships still afloat along the quay were burning fiercely, and violent explosions shook the air every few seconds. The little British freighter Devon Coast, untouched during the battle, had a stick of bombs miss her, and as she rolled and pitched in the resulting explosion, a last bomb made a direct hit. She went down, and the attack was over.

The next day, with mess boys filling in as able seamen, the crew of the Lyman Abbott managed to right her enough to get underway for emergency repairs. Searchers probing the wrecked American Libertys found 38 bodies; 150 men were missing from those five ships. The only men to survive out of the Joseph Wheeler crew had been ashore when the battle began.

The Joseph Wheeler had her starboard side blown out and was on her port side when her Armed Guard officer, who had been ashore arranging for the pay of his men, last saw her. The only Armed Guard survivors were the officer and twelve men who were taking a well-earned liberty in the town. There were 16 Armed Guards dead or missing and 26 of the merchant crew missing.

There were over 1,000 military and merchant marine casualties, some 800 were admitted to local hospitals. 628 suffered from the mustard gas, of whom, 69 died within two weeks. The port was closed for three weeks; it had been rendered into rubble. The explosions had shattered windows up to 7 miles away.

The Knoxville Journal, January 20, 1944
James William Greene, 19, seaman first class, son of Mr. and Mrs. C.F. Greene, Fountain City, has been reported missing in action in the Southwest Pacific area. The official notice was received from the War Department in December, Mrs. Greene said yesterday. Another notice received from a government source indicated the young man may have been lost when enemy bombers sank five ships. Young Greene was a student at Fort Sumpter Grammar School near Halls Cross Roads an attended church and Sunday school at Salem Baptist Church. He was an employe of Standard Knitting Mills when he enlisted in the U.S. Navy. He was born and reared in Knox County and his birthday will be Jan. 23, his mother said. Charles Greene, another son of Mrs. Greene, is in the U.S. Army somewhere in the Southwest Pacific area. The parents and seven daughters live in Knox County. 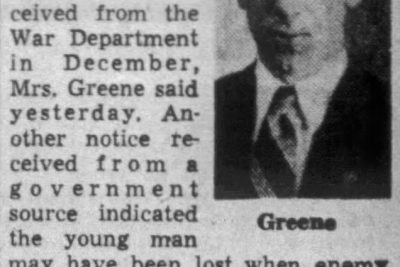