James Ueal Williams was the son of James Alfred Williams and Martha Burwick.
He died on 13 November 1942 but was officially declared dead on 14 November 1943
Memorialized at the Manila American Cemetery, Philippines

Served on the U.S.S. Dixie and was transferred to the U.S.S. Cushing (DD376) on 15 September 1942. The U.S.S. Cushing was lost due to enemy action on November 13, 1942, about two miles to the southeast of Savo Island. The Cushing was heavily hit by enemy fire at about 02,00, and was stopped, lying dead in the water with no power on the ship. Shortly thereafter the ship again came under heavy enemy fire to which no adequate reply could be made. At about 0220, while under fire, the Commanding Officer ordered that the ship be abandoned, and about one half the crew (who were unwounded) and over sixty-five wounded men and six wounded and four unwounded officers left the ship. Due to the enemy fire the ship commenced to burn furiously forward, spreading aft. There was also a fire below decks aft.
At about 0315, the Commanding Officer left the ship and believes that he was the last man off the ship.

The Dayton Herald, Jan. 14, 1943
The first Rhea county youth to be reported missing in action is James Ueal Williams, son of Mr. and Mrs. J.A. Williams of Sawyers Hill. His parents received the following official telegram of notification from the Navy department:
Washington, D.C., Jan. : The Navy department deeply regrets to inform you that your son, James Ueal Williams, apprentice seaman USNR, is missing following action in the performance of his duty and in the service of his country. The department appreciated your great anciety but detals not now available and delay in receipt thereof must necessarily be expected. To prevent possibleaid to our enemies please do not divulge the name of his ship or station.
Rear Admiral Randall Jacobs the chief of naval operations.
Ueal, who was 18 years old on Feb. 17, 1942, volunteered into the Navy last July 22, just five days after an older brother, Ford, who was 20, had volunteered. Both boys were inspired by the induction into the Army of an other brother, W.E., 23, who had been in the Army since February 1942, and was at that time stationed in England. The two younger boys were sent to San Diego, Calif., and within a short time volunteered for duty on cruisers which were ready to sail. They were separated but met later at Pearl Harbor where they wrote to playing ball together. The cruiser on which Ueal was stationed was reported destroyed in action off the Solomon Islands sometime in November.
The Williams family are native Rhea countians, and are members of the Foursquare church. Ueal grew up in the chuch and was a model boy who gave his parents little trouble. He had a love of excitement and adventure, however, and coased his parents into signing the papers so that he might volunteer.  W.E. Williams is a member of the ground crew with the Air Force now stationed in Africa. Ford is somewhere in the Pacific, and another brother, Ancil, is in Dayton. Ueal’s sisters are Mrs. Heber Brumley, Mrs. Richard Davis, Mrs. Luther Biship, Misses Evelyn, Lorena and Betty, all of Dayton, and Mrs. Delman Green of Chattanooga. 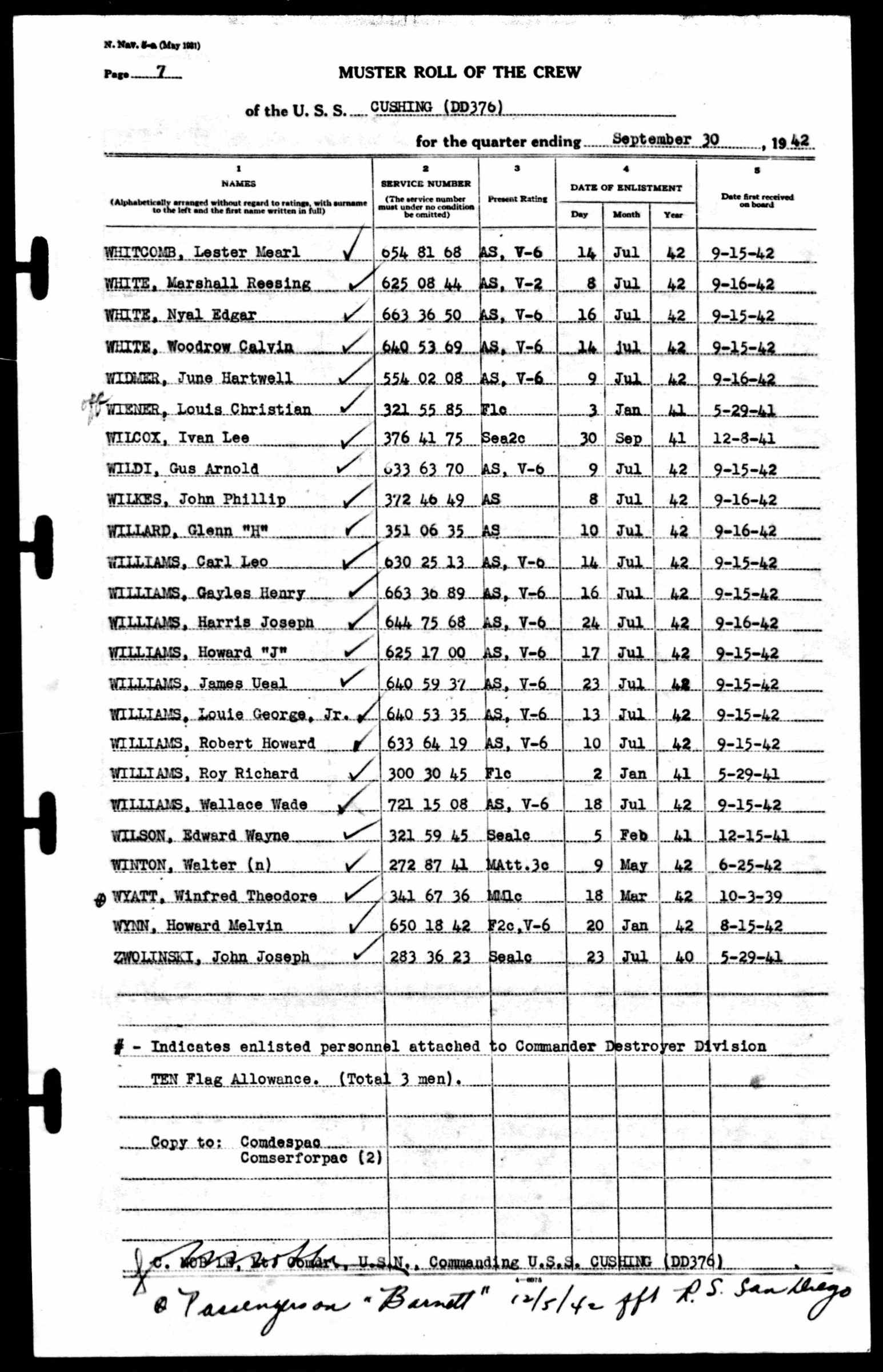 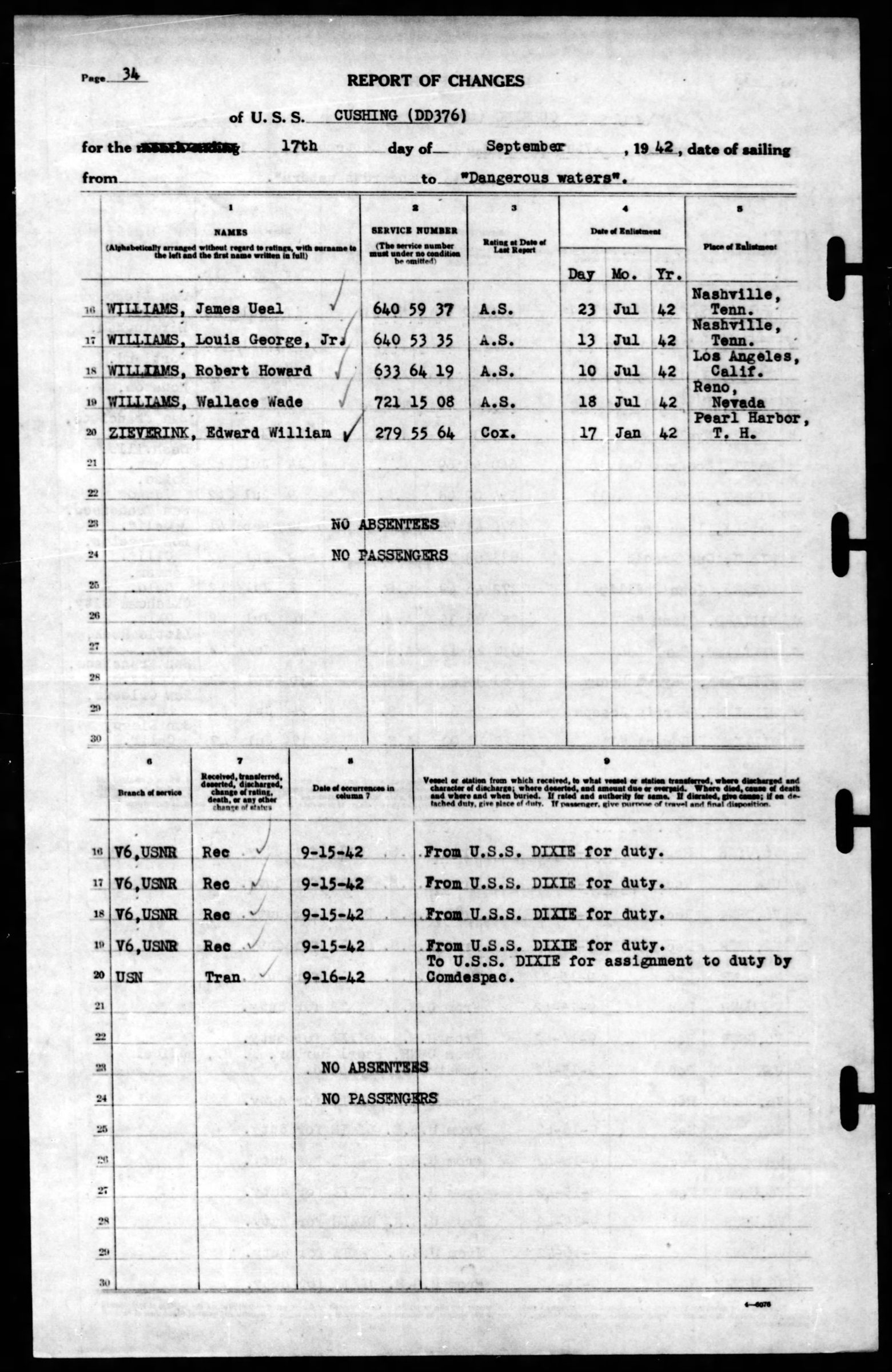 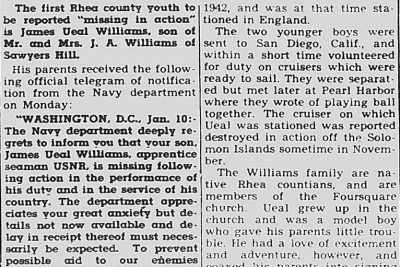