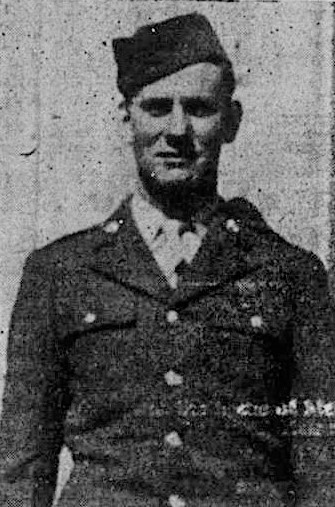 Crossville Chronicle, September 6, 1945
The following letter from the Regimental Commander, gives the particulars concerning the death of Private First Class James T. Kerley April 8, 1945 in action:
My dear Mr. Kerley,
You have undoubtedly been informed of the death of your son, Private First Class James T. Kerley, 34913472. I am writing to you in the hope that a word from me, his Regimental Commander, will bring you some consolation in your bereavement. Your son was killed 8 April 1945 in the vicinity of Rosback, Germany by enemy sniperfire during action in which his company was engaged. He was instantly killed. His remains were interred in a well marked and well planned American Cemetery at Ittenbach, Germany along with others who have fallen in battle. A Protestant Chaplain officiated at the burial service of your son. During the period in which James was a member of my command his conduct was in keeping with the highest traditions of the United States Army. His excellent traits of character wet a good example for the men of his organization. He was a man who wasn’t satisfied with just the best; he wanted to do better regardless of how well he did the job. Recently James was awarded the Combat Infantryman’s Badge for exemplary conduct in action against the enemy. He was very devoted and loyal at his organization and strived to makei t the best in the Army.
Private First Class Kerley’s close friend and the entire regiment realize that your loss is also our loss. With James’ passing we have lost a true friend, a brave comrade, a loyal American, and a fine soldier. To express my sympathy at this time is small consolation, but please realize its sincerity.
Very sincerely yours, C.M. Willingham, Colonel Infantry Commanding.

Crossville Chronicle, January 20, 1949
The body of another one of our boys who fell in the line of duty for his country has been returned to us for burial. Pfc. James Theodore Kerley, son of Mr. and Mrs. James Kerley of Linary, was killed in Germany in April, 1945. The body was taken from the train Friday to the home of his brother, Carl Kerley, where more than 150 friends and loved ones called to pay last respects to one much beloved by all. The many beautiful floers were also a token of esteem with which Theodore was held. Brother Vance Burgess of Crossville conducted the services with Hieronymus in charge. Our deepest sympathy goed out to parents and loved ones whose broken hearts are made to bleed again by this ordeal – the aftermath of a terrible and cruel was in which many of the flower of our manhood were taken. Pfc. James Theodore Kerley, son of Mr. and Mrs. James Kerley of Linary was born August 27, 1924, and was killed in Germany April 8, 1945 while serving this country. He became a member of the Church of Christ at the age of 14 and was a loyal and devoted Christian.
To mourn his passing are his parents; 4 sisters, Mrs. Wiley Hayes, Mrs. Dennis Dyal, Geraldine and Carlene; 6 brothers, Albert, Roy, Carl, Kermit, John Burton and Donald, all of Linary, besides other relatives and friends. 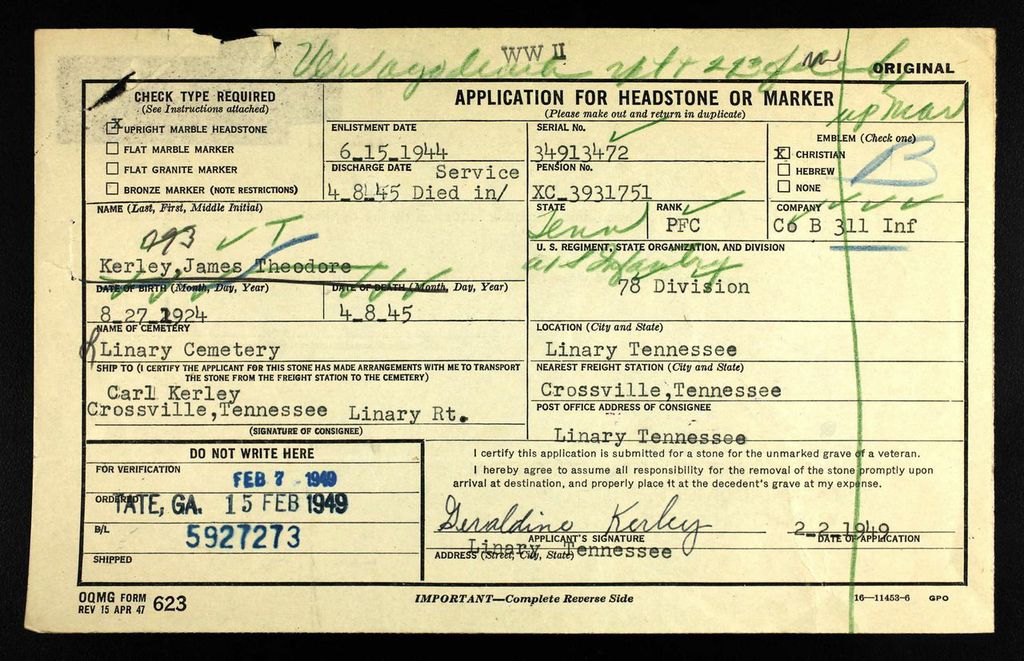