Aircraft B-24H, with serial number 41-28924 departed from Seething on a bombing mission to Ludwigshafen, Germany. The aircraft was hit by flak over the target. It crashed at Friesenheimer island near Mannheim-Sandhoven. 6 Chutes were seen.

Quote:
“As detailed above, I was looking directly at Ed’s plane when he was hit between #3 & #4 engines. Fuel cells are located here and I was looking directly at a huge ball of fire as the wing buckled & separated. The plane (B24H 41-28924) crashed on the Friesen-heimer Island near Mannheim-Sandhofen, Germany. Nine (9) men KIA and lone survivor, Copilot Clifford B. Unwin became a POW. Our 2nd mission and their 15th mission. The MISSING AIR CREW REPORT (#9467) is mostly illegible. However, Lt. Unwin lived and was captured.” 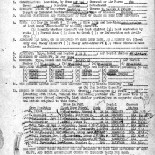