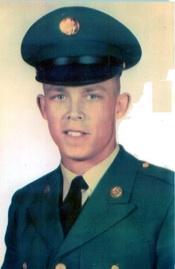 David De la Rocha
ddelarocha@msn.com
Admirer
Dark Horse Hero
Sargent James Potter gave his life for his country on September 11,1969. He was part of the Bigh Red One’s elite Dark Horse scout teams that flew recon missions in the Big Red One’s area of operation. On this day, Sargent Potter was a crew chief in the back seat of a Loach 06-a observation helicopter being piloted by scout pilot Bill Jones. The scout team was being escorted by a Cobra helicopter or gunship. It was the Loach’s job to scout a certain area and if the Loach drew fire from the ground, the Cobra gunship would then come in from out of altitude Usually 1,500 feet at take out the enemy target. On this day the scout ship would be working an area known as the Razorback area or Nui Tha La. The area was also a staging area for the enemy to bring in men and materiel into Vietnam from Cambodia.While scouting the area, the scout pilot Bill Jones reported seeing men and movement down below to his Cobra gunship. The gunship next reported that the scout ship was taking heavy enemy fire from below and was hit and going down. The Loach went down after being hit by the enemy fire and burst into flames after hitting a tree on the way down which punctured the fuel tank.The pilot was able to make it out of the wreck severly burned and was lifted out of the area by the Cobra crew who took heroic measures and landed near the wreck with the enemy still lurking around the downed Loach. Sargent Potter unfortunately was killed in the hail of enemy gun fire that brouhgt down the Loach. Rest in Peace Sargent Potter.
Tuesday, December 31, 2002