James P. Graham was born September 10, 1918. He was the son of Plez and Ruth A. Graham of Bledsoe County, Tennessee. He attended grammar school and was never married. James enlisted in the United States Army on January 11, 1941 at Fort Oglethorpe, Georgia. He was promoted to Staff Sergeant and served with Company C, First Battalion, 117th Infantry, 30th Division in the European Theater in Normandy. He was killed in action on July 12, 1944. Staff Sergeant Graham was repatriated and buried at the John M. Hixon Cemetery in Bledsoe County, Tennessee. He was awarded the Combat Infantryman Badge and a Purple Heart. 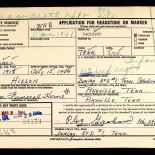