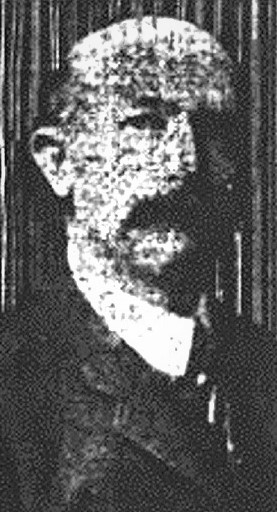 James N. Hazlehurst, president and manager of the Lookout Iron Company, was born in Hancock County, Ga. January 15, 1864. He was reared in his native State and finished his education at Sewanee University, Tenn., in 1883. His parents, George H. and Irene W. (Nisbet) Hazlehurst, natives of Georgia, had in the meantime removed to Chattanooga. Our subject was in the Western States and Territories from 1878 to 1881 as civil engineer on the Texas Pacific, New Orleans & Pacific, and Louisville, New Orleans & Texas Railways. Upon the organization of the Lookout Iron Company in 1885, he became its vice-president and one year later its president. He has officiated in the latter capacity in a faithful and highly efficient manner up to the present time. Mr. Hazlehurst is also a partner in the mercantile business of A. B. Wingfield & Co., of this city. October 6, 1886, he married Miss Mary E., daughter of John C. Griffis, of Chattanooga.
-Goodspeed’s “History of East Tennessee” 1887

Article from the Constitution, Atlanta, Ga., Friday, February 21, 1919
Major Hazlehurst, Atlanta Engineer dies in France.
The death on February 9 of Major James N. Hazlehurst, of Atlanta, an engineer of the United States Army in France, attached to the peace commission, was announced in a telegram yesterday of Mrs. Hazlehurst, the telegram stating that pneumonia and cerebral hemorrhage was the cause of the death.
Major Hazlehurst, who was one of the leading municipal engineers of the southeast, well-known to the public as well as to the engineers of this section, left Atlanta about two years ago and went to France with a regiment of engineers.
While there he was in charge of the water supply for the army in important districts, and also in the construction of docks and other important works, including quarters for German prisoners.
Recently Major Hazlehurst completed his work at Miramas and was ordered to report to Paris, where he was assigned to duty with General McKinstry, the consulting engineer for the peace commission. Serving with Lieutenant Colonel Jackson, Major Hazlehurst was assigned to duty in valuation work in Belgium and was about to proceed to that country when he was attacked by bronchial pneumonia. This was a direct result of exposure when he had to ride in an open car almost the entire day in the rain. Notwithstanding his illness he continued on duty for some days, until forced to take to his bed, and the telegram yesterday announced the sad result.
Major Hazlehurst had expected to return to this home until assigned to new duty, which would have kept him in Belgium for some time. The announcement of his death will be received with great regret by his many friends.

“My research has led me to discover that James Nisbet Hazlehurst served as General Manager of the St. Augustine and North Beach Railway in the early 1890’s. The President of the railway, Virgil Powers, a prominent citizen of Macon, GA and Mr. Hazlehurst operated the short-line railway between the resort city of St. Augustine, FL and North Beach, now called Vilano Beach.”
-Submitted by Thomas Rahner 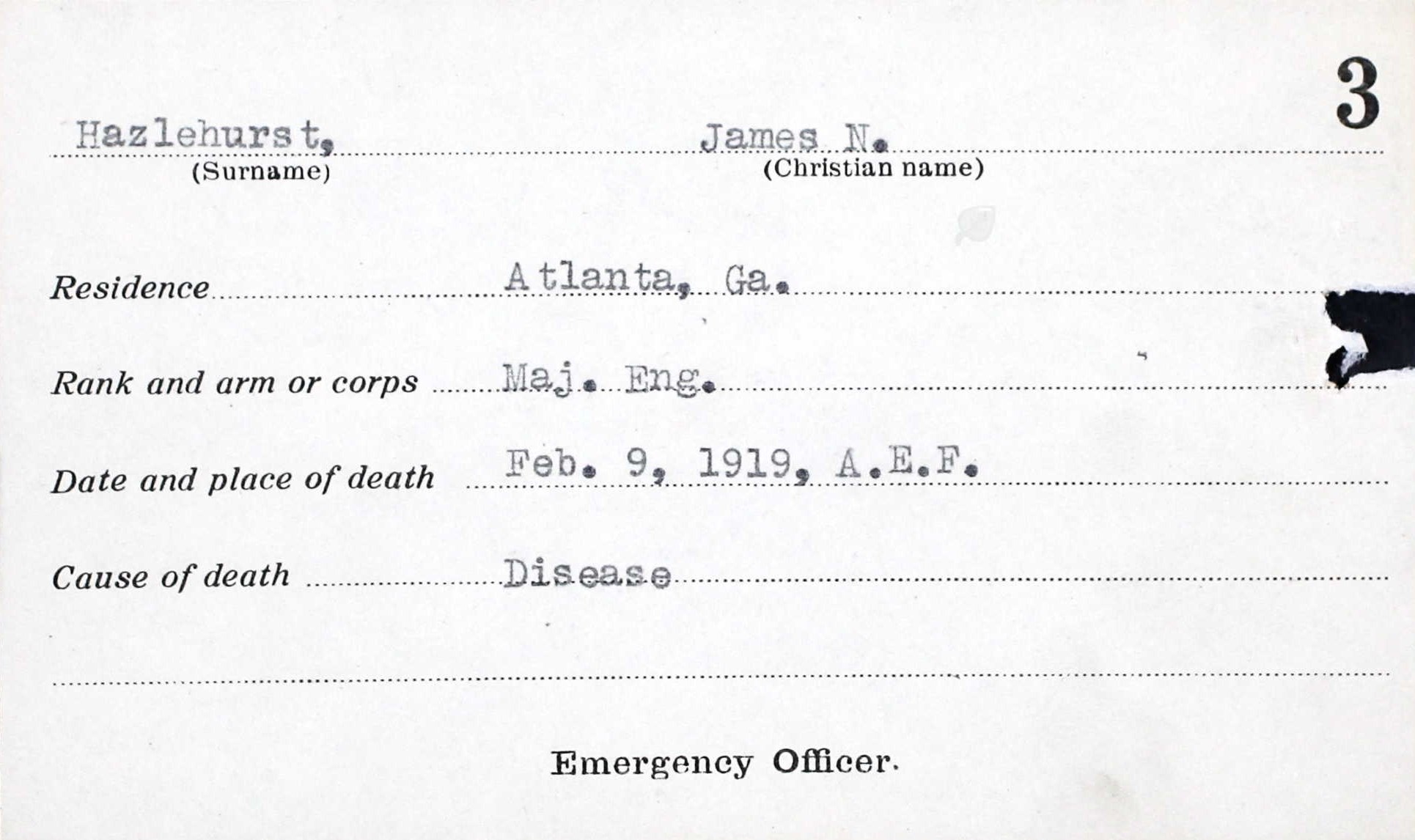 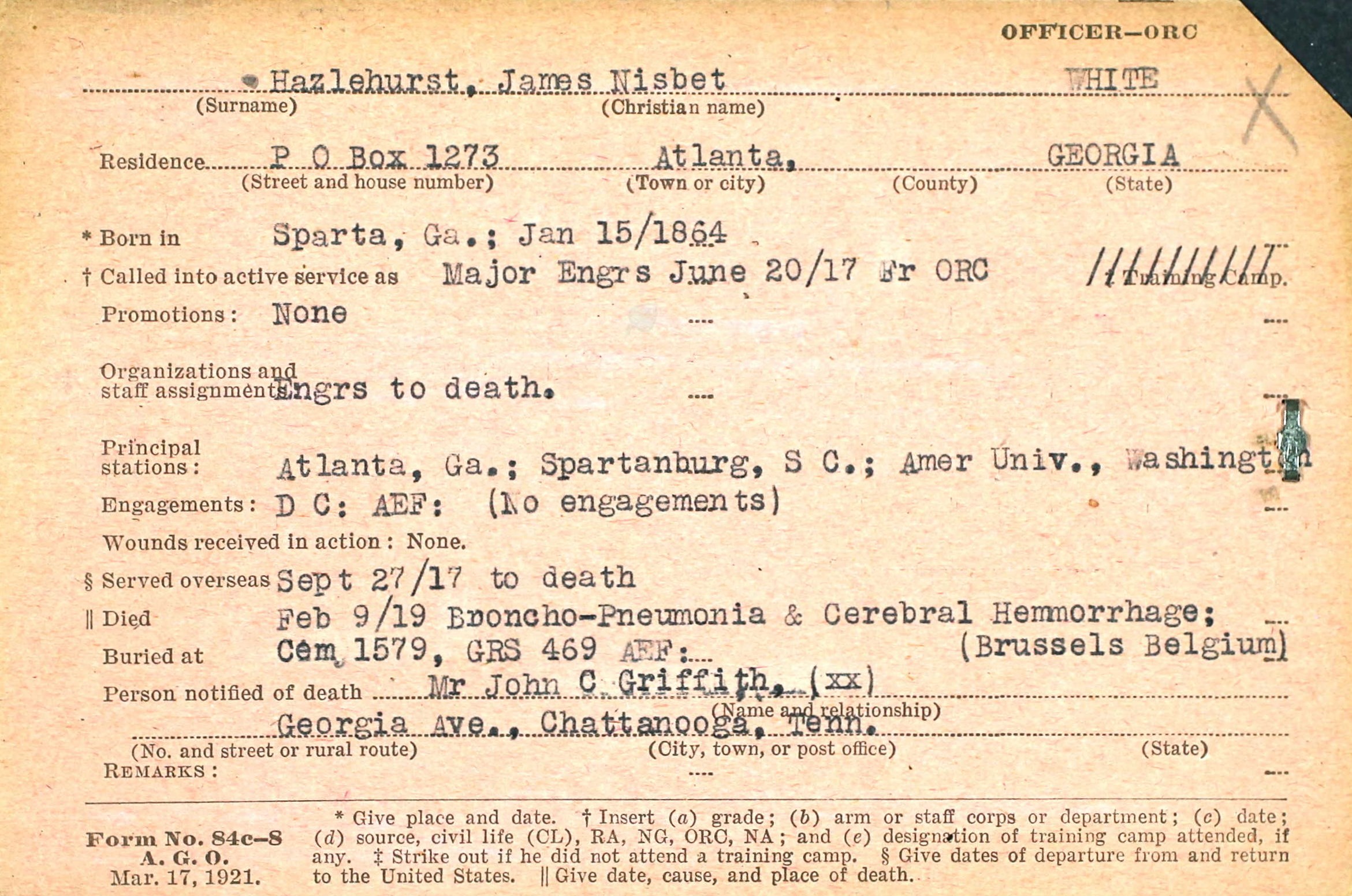 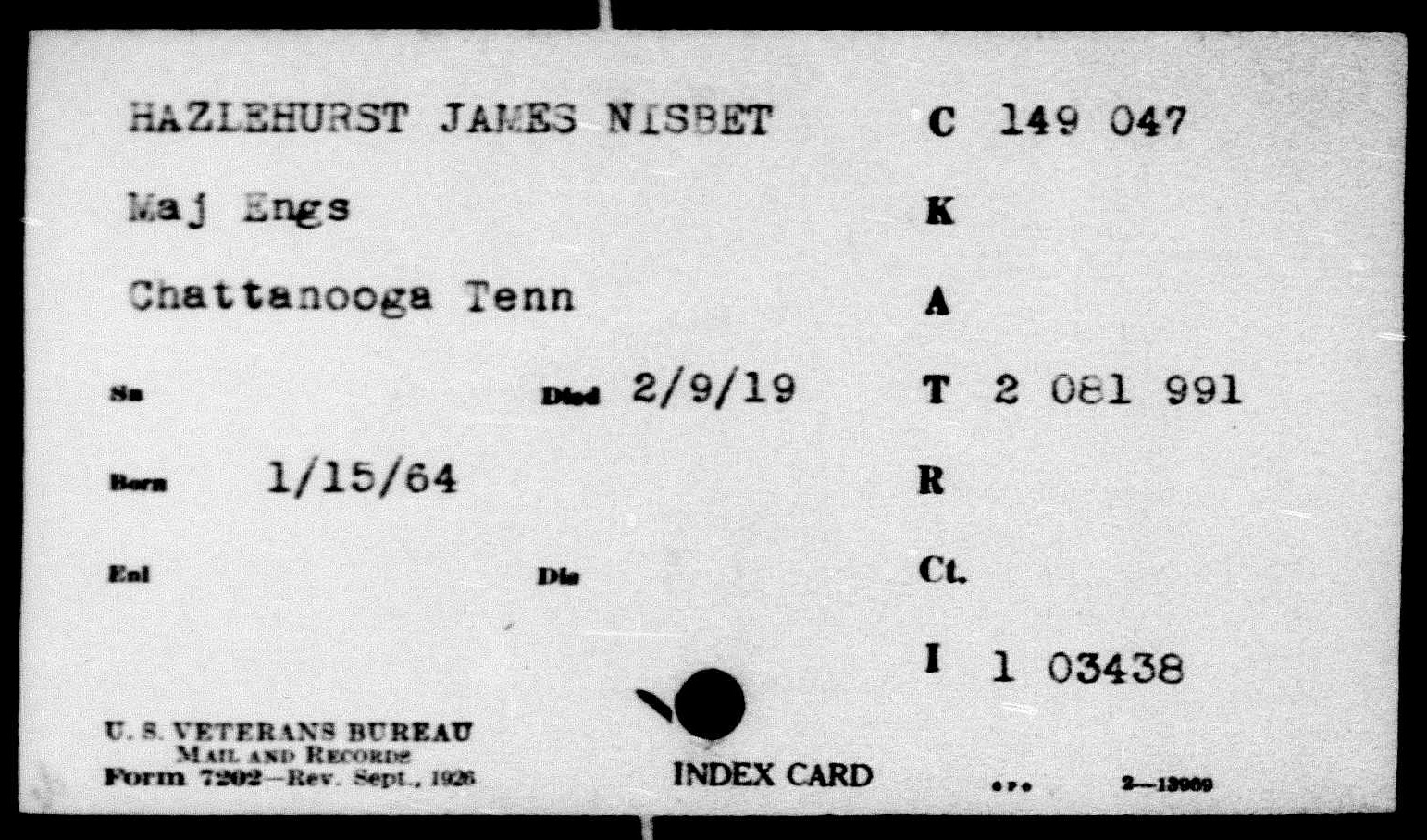 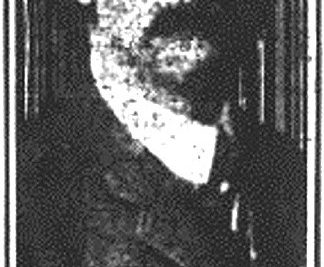