James was born in 13 September 1896 in the Lamar Community of Jonesborough, Washington County, Tennessee. After his mother’s death in 1911, his father moved him and the family to Anniston, Calhoun County, Alabama. In the fall of 1913, James met some soldiers from nearby Camp Pettus that were there for Army Maneuvers from the State of Missouri and they became friends. When they returned to Missouri, James went with them.

James enlisted in the United States Army on 4 December 1913 with service number 44934 at Jefferson Barracks in Lemay, St. Louis County, Missouri stating his age as 21 and 11 months, in fact he was only 17 years old. He was assigned to Company H, 30th Infantry Regiment. On 1 June 1917, James was transferred to Company H, 39th Infantry Regiment. The 39th was a new regiment being mobilized at Camp Syracuse, New York. Soldiers from the 30th were selected to be its founding troops and to help train the new recruits that were being enlisted for the regiment. Camp Syracuse itself was established in May 1917 on the grounds of the New York State Fairgrounds with elements of the 9th and 16th Infantry Regiments, as well as the 5th Machine Gun Battalion to operate the camp.

It was here at Camp Syracuse that James met the love of his life (Clara Belle) and they were married on 17 October 1917 in Syracuse, New York. Soon after the 3rd Company Training Battalion of the 16th Infantry Regiment received movement orders to rejoin their main regiment that had already sailed for France on 14 June. The company was not at full combat strength, so they were allowed to recruit from other units at Camp Syracuse. James was one of those who was recruited, he was reassigned to the 16th and they left for the coast soon after leaving his new bride with her parents. He departed New York Harbor aboard the Royal Mail Ship (RMS) Carpathia a Cunard Lines Ship on the morning of 22 November.

James arrived France on 4 December 1917 and was assigned to Company M, 16th Infantry Regiment, 3rd Battalion, 1st Infantry Brigade, 1st Expeditionary Division. The Supply Company of the 16th Regiment was in need of soldiers that could handle a wagon and a team of horses, so a call went out to the regiment for such men. On 29 December 1917, James was reassigned to them as a Wagoner. He served with honor and kept his men supplied until his death of lobar pneumonia on 5 October 1918 near Froidos, Meuse, Lorraine, France. He was interred wrapped in a blanket at French Military Cemetery #290, Row 17, Grave 82 in Froidos with full military honors also on the 5th.

James was disinterred on 4 October 1921 placed in a casket and transported to Antwerp, Belgium for his voyage home aboard United States Army Transport Ship St. Mihiel on 16 December. It was agreed upon with Clara (his wife) and Jake (his father) that James would be returned to him in Alabama. Jake became seriously ill prior to James returning to New York and sent Clara a telegram telling her to receive James. Clara then sent a telegram to the United States Army Quartermaster at Brooklyn, New York on 18 December asking them to hold James there until she could make final arrangements.

The Army conducted a Memorial service for James at Pier #2 on the Army Base at Brooklyn, New York at 2pm on Wednesday, 21 December 1921 prior to him being shipped out. He arrived Clinton, New York aboard Train #1 of the New York, Ontario & Western Railroad at 6:28pm also on the 21st and Clara signed for James. He was interred the following morning the 22nd at an undisclosed location with a private service. The American Legion provided full military honors and marked his grave with a World War Bronze Medallion, but his grave was never marked with anything showing a name or who was there. The small burial card marked only with James Miller, d: 5 Oct 18 was filed at the cemetery and forgotten.

Update: James’ military marker was installed at the Deansboro Village Cemetery in the Town of Kirkland, Oneida County, New York on Tuesday, 8 May 2018. Full military honors will be given on Tuesday, 19 June 2018 by members of the American Legion Post 24 from Johnson City, Tennessee and Post 569 from Oriskany Falls, New York. Other military organizations will also be in attendance as will be two family members from Anniston, Alabama. 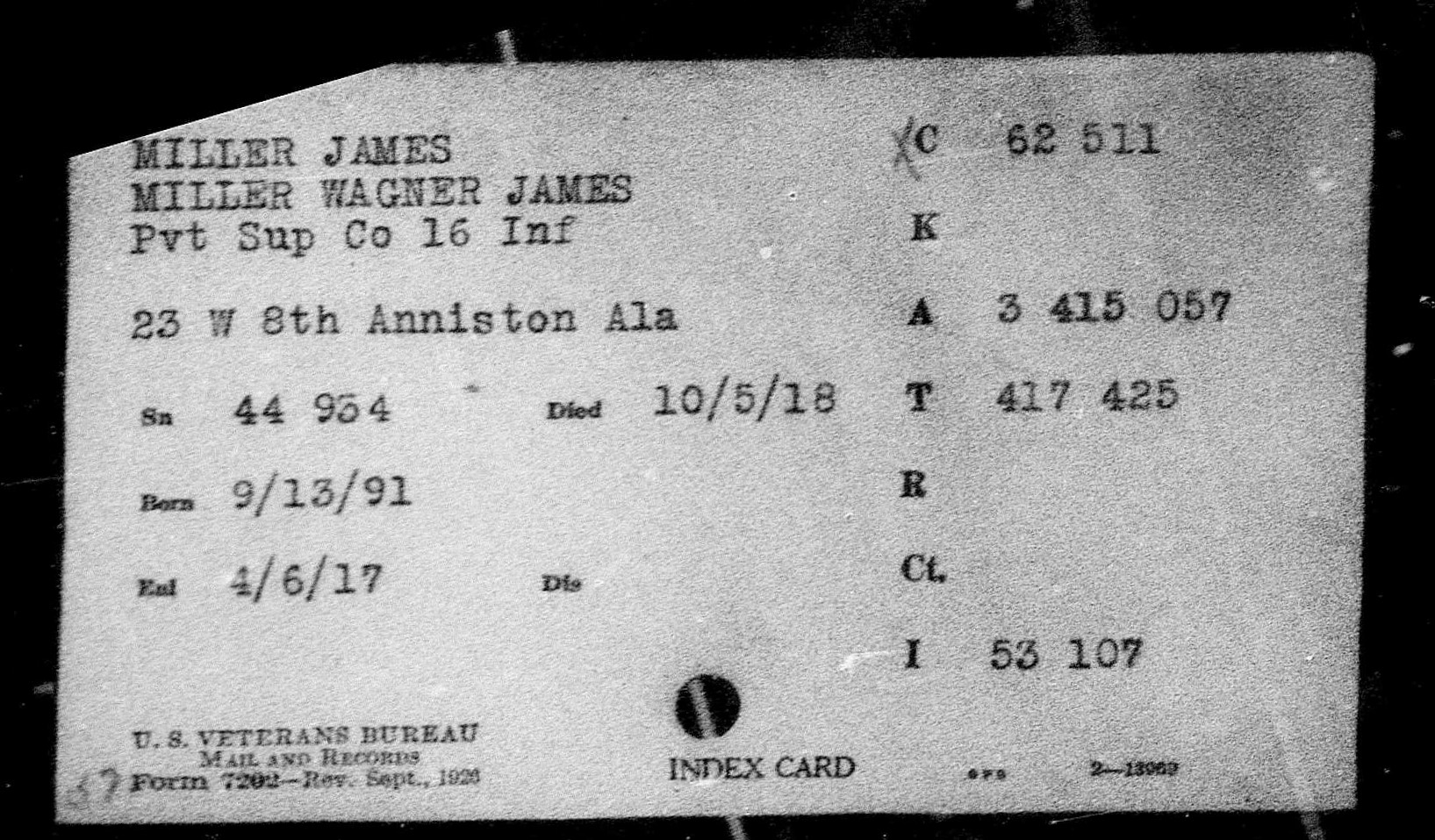 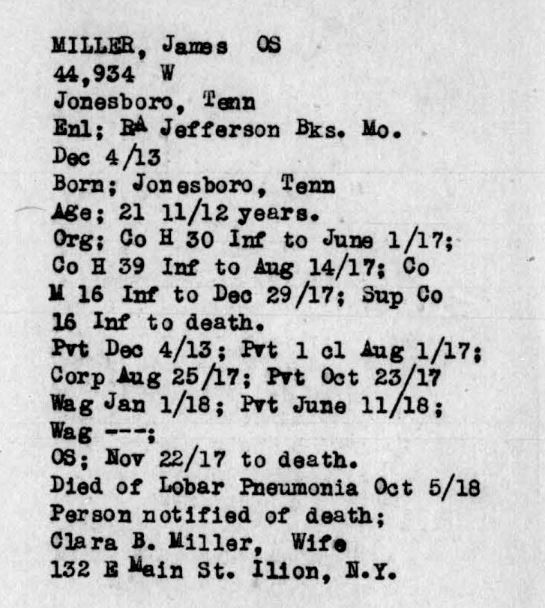