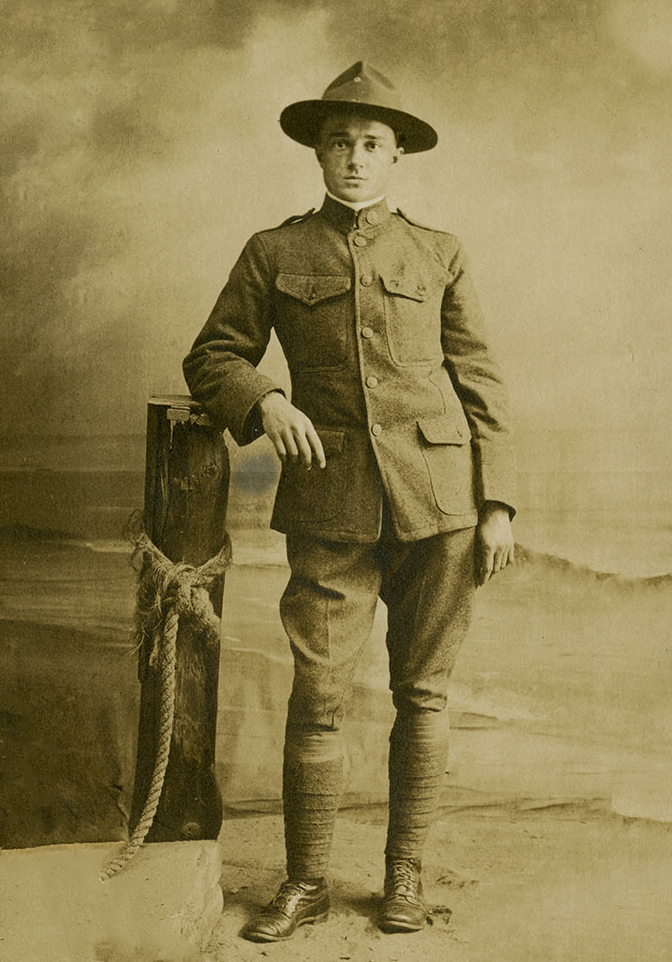 Morristown, Tenn., Nov. 7. The Rev. Lynn R. Walker has received a letter from his friend a Y.M.C.A worker in France, Dr. V.P. Merrill, announcing the death of Corporal James. M. West. James is the son of Mr. and Mrs. James A. West of this city, and was born in Washington county, but reared here, and was highly thought of by all who knew him. He joined the Signal Corps sixteen months ago while in Michigan.
The parts of Dr. Merrill’s letter pertaining to the death and funeral of Corporal West follow:
“What I have on my mind and heart this morning is the death recently of one of our soldier boys here in the local hospital. His name is James M. West, of Morristown, Tenn., son of James A. West. Knowing that you were there, I thought it might be very well to write you and you might convey the facts to the loved ones. I attended the funeral. The service, of course, was a very impressive one to all of us. The band played some familiar hymns. Mr. Evans, religious director for this Leave Area, a Baptist minister from Iowa, conducted the services very impressively. The brave boy was gently lowered into his resting place in France in the village cemetery. Three volleys were fired and taps were sounded, and we came away. Poor boy, he came down from the front somewhere to recuperate. He had been gassed and took a severe cold and it went into pneumonia, and he passed away very quickly. He was buried last Saturday, Oct. 5th, at 300 p.m. He has not died in vain. He performed his great task for God, and humanity and helped to free the world from the threatened thralldom of Hunism.”
Corporal West is the first Morristown boy to die in France.
– The Journal and Tribune, Knoxville, Tennessee, November 8, 1918.

Bristol, Tenn., Nov. 8.- News just reached here announcing that James West, Jr. aged 25, died in a French hospital on October 5. Young West was gassed on the front, later contracting pneumonia, which resulted in his death. He is the son of former State Senator, James A. West, of Morristown, Tenn., and a brother of Mrs. N.B. ReMine, of this city.
Mr. West was formerly connected with the Hudson Motor Company at Detroit, Michigan. He enlisted in the signal corps in Detroit nearly a year ago and had been overseas several months. He received his education at the University of Chicago and at the University of Tennessee.

After the war, James West was repatriated back to the United States and to his home state of Tennessee. He was buried at Knoxville National Cemetery on November 20, 1921. His grave marker lists his rank as Sergeant. 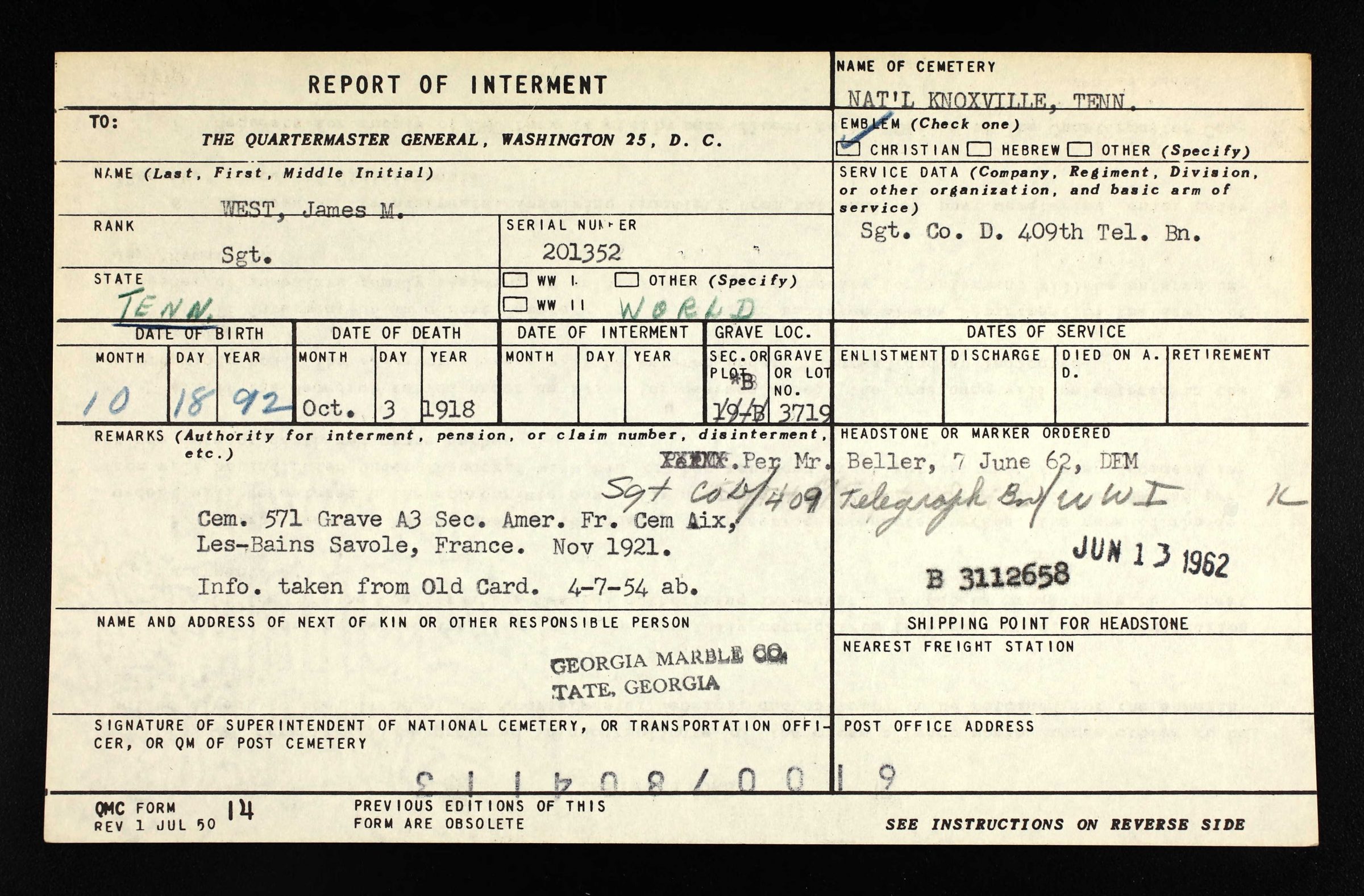 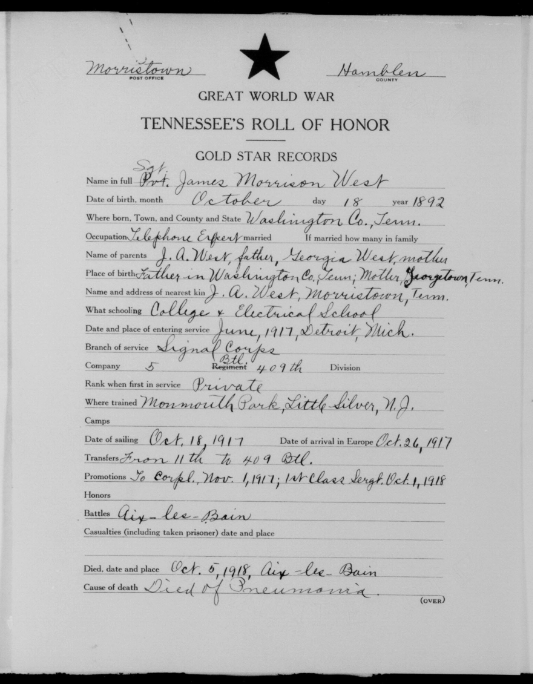 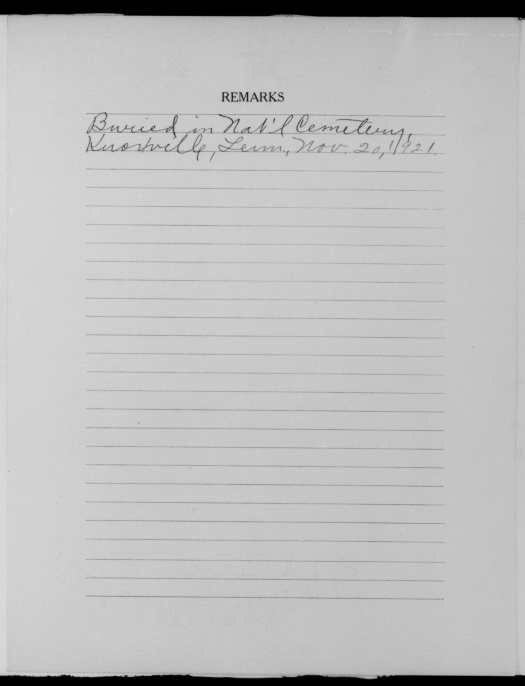 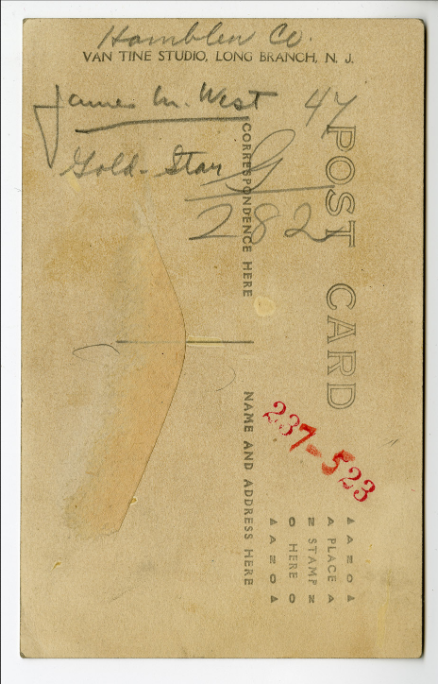 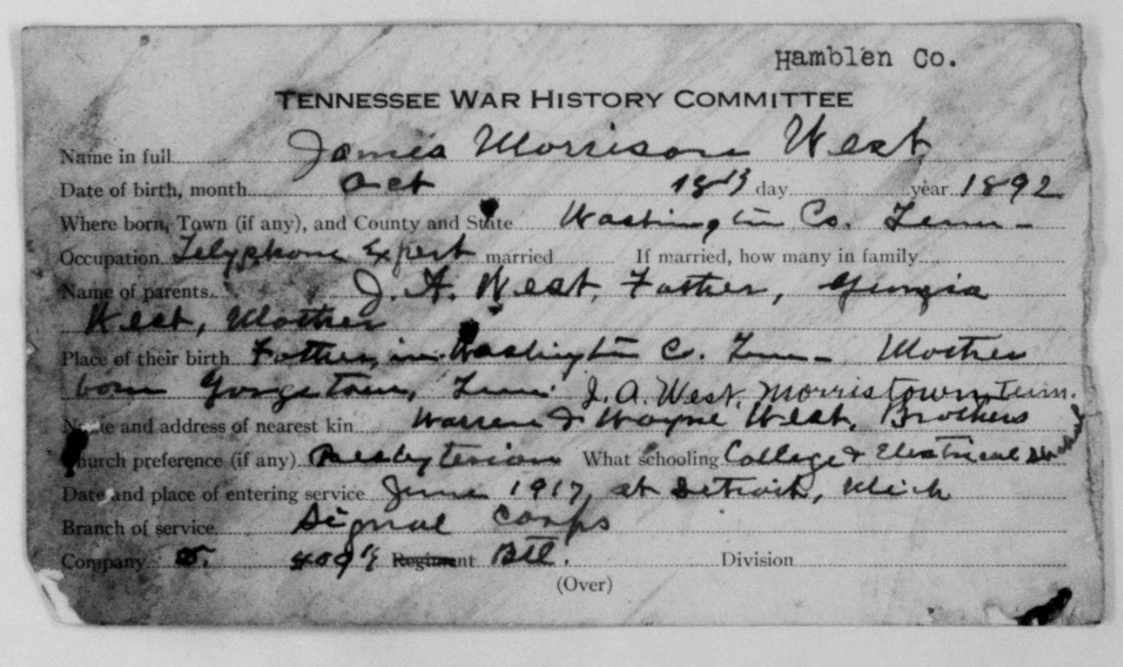 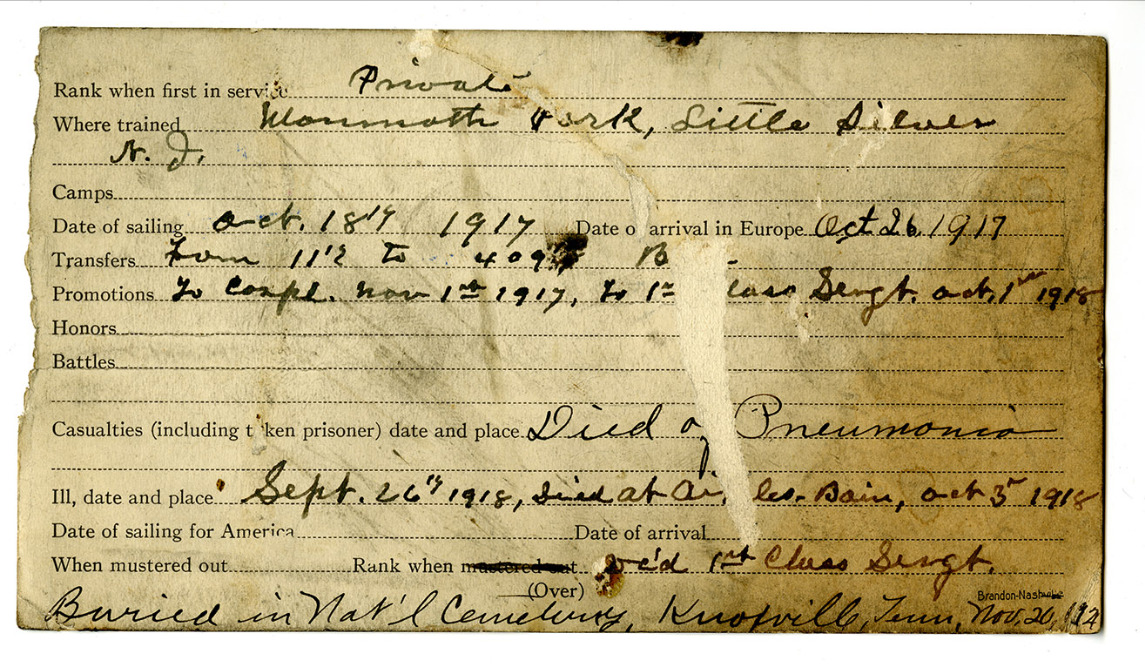 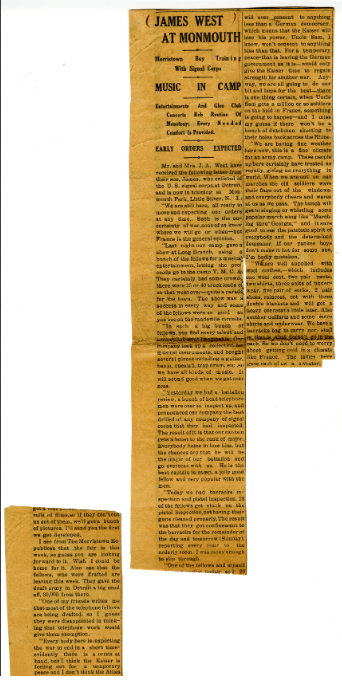 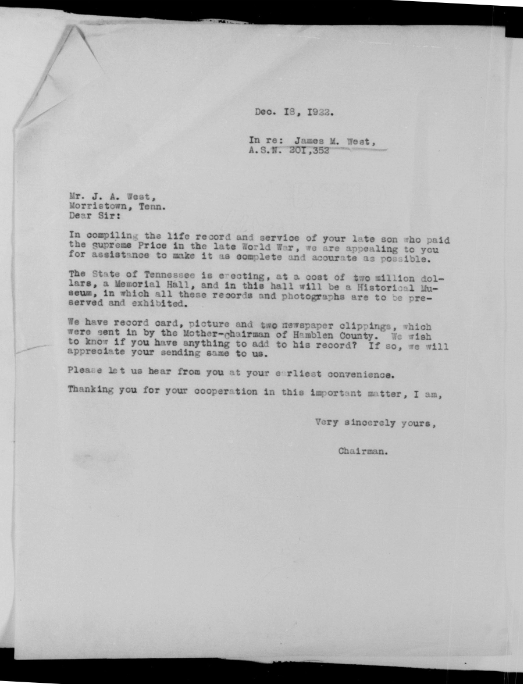 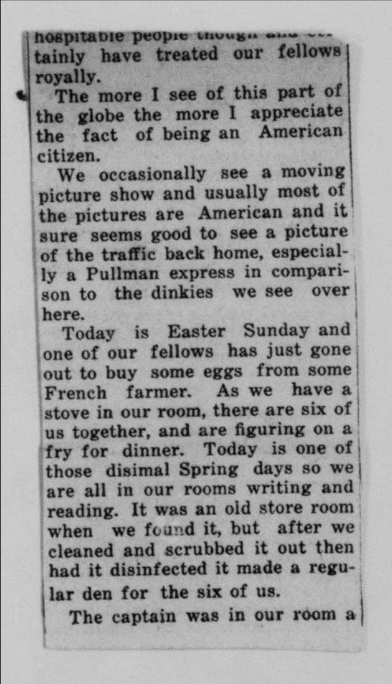 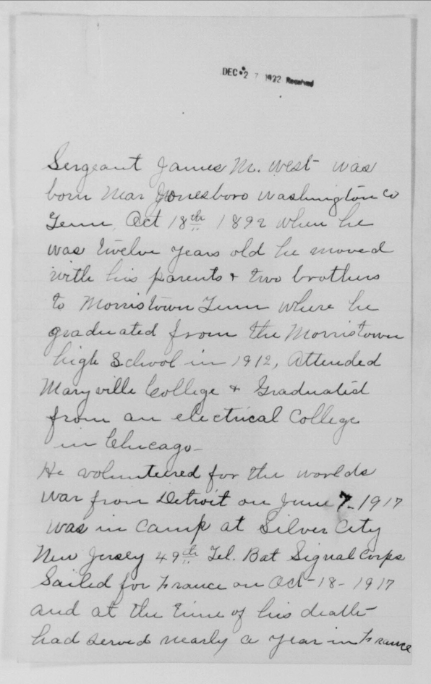 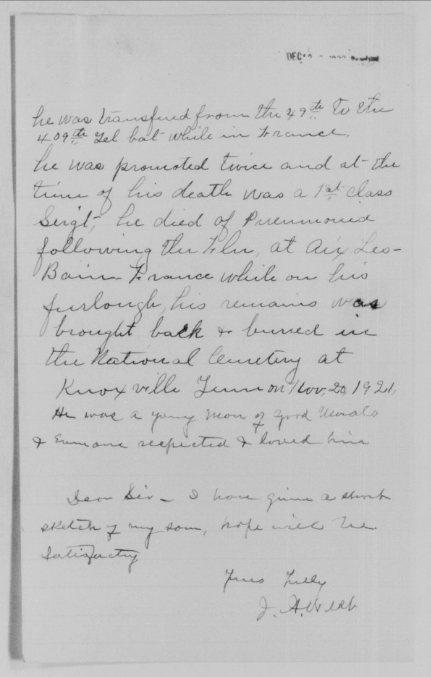 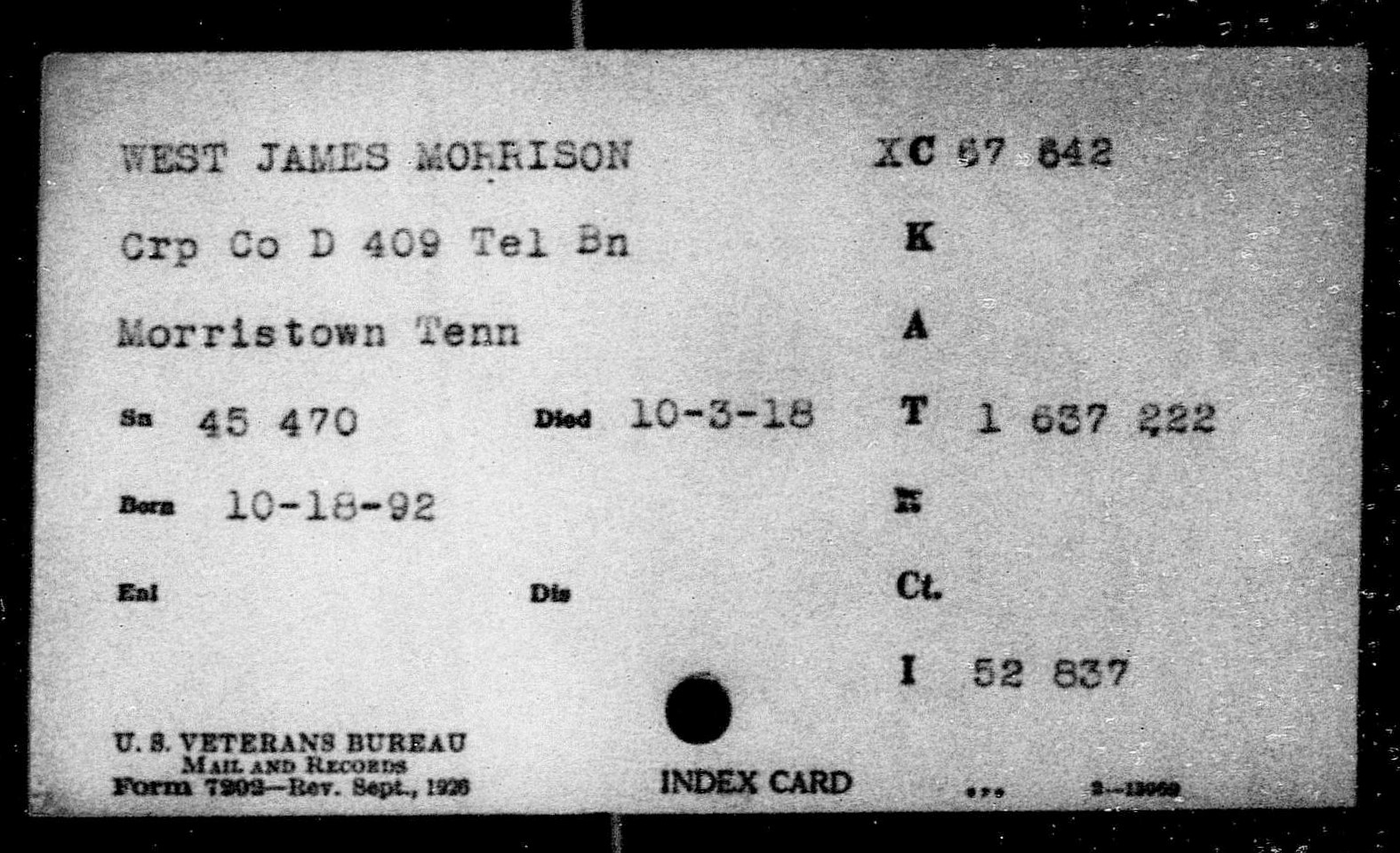 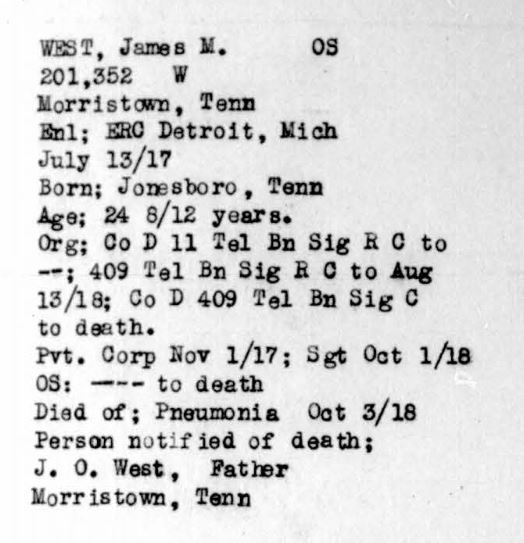 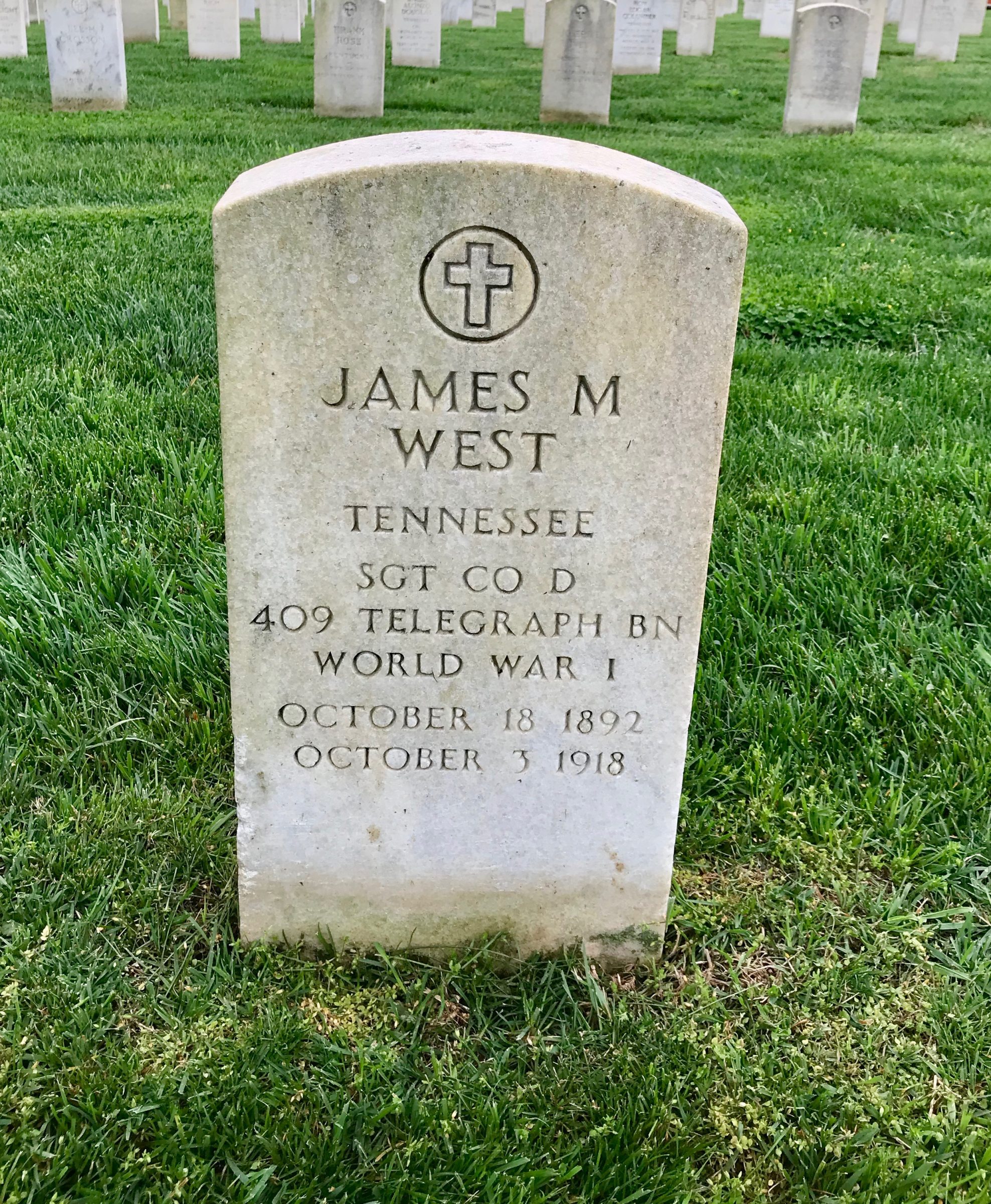