Enlisted 21 February 1941 – Roanoke, Virginia
James Offield was captured on 7 May 1942 in the Southwest Pacific Theatre: Philippine Islands and died as Prisoner of War on 7 September 1944 on the Japanese Prison Ship Shinyo Maru.

The Allies intercepted a message about the Shinyo Maru and, thinking it was carrying enemy soldiers, the USS Paddle attacked it on September 7, 1944 off the coast of Mindanao. There were 750 American prisoners of war aboard. Some Japanese guards shot prisoners as they struggled from the holds or were in the water; 688 died when the ship sank, leaving only 82 survivors; 47 of 52 Japanese guards died. 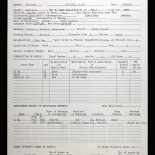 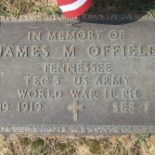