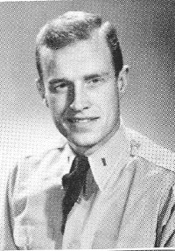 He flew F-51 fighter-bombers in Korea.

See: http://www.truckbustersfromdogpatch.com/index.php?id=86, as follows:
Bellows, 1st Lt. James Mayo, Jr.- 12th FBS pilot KIA 18 June 1953. Bellows was flight leader on Mission Expire 17, airborne at 1830 on MPQ mission. The Number 4 man, Lt. Sprague, could not release his bombs so the flight turned North to attempt to salvo the bombs. After jettisoning bombs and again turning south, intense and accurate automatic weapons fire was encountered, some of which hit the lead in the engine section. Lt. Bellows aircraft was hit in the aft section and flamed out. The flight went to the emergency channel. The last transmission received by the flight was, “I’m at 3,000 feet and am being shot at. I’ll have to get out soon.” The pilot crashed in the aircraft. The flight stayed in the area until low on fuel and then withdrew. The pilots did not sight Bellows but a ground party recovered his body. The primary cause of the loss was due to enemy automatic weapons fire. The Air Force investigation recommended “that briefings stress avoidance of known AAA areas and that aircraft fly at altitudes where the guns are least effective.” 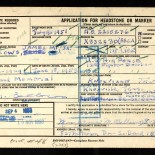 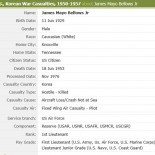