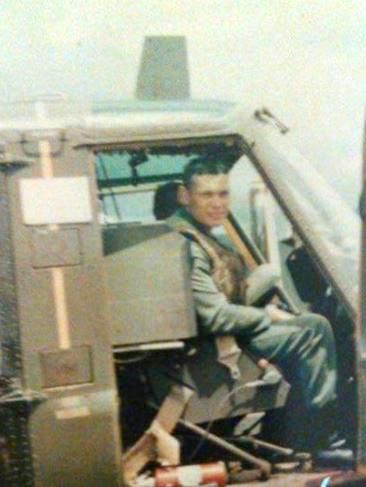 Warrant Officer James Lee Daniel was born on October 21, 1941, and was originally from Athens, Tennessee. He served his country in the Vietnam War in the United States Army, as a helicopter pilot in 119th AHC, 52nd Aviation Battalion, 17th Aviation Group, 1st Aviation Brigade. His tour in Vietnam began on March 6, 1967. On September 2, 1967, WO Daniel was flying a UH-1 helicopter over Pleiku province in South Vietnam when his helicopter crashed in poor weather conditions; he was killed in the accident, at the age of 25. WO Daniel is memorialized on the Vietnam Veterans Memorial on Panel 25E, Line 82. The following is an online tribute left for WO Daniel:

Ronald Corbin
His Aircraft Commander & Fellow Pilot, 119th, AHC.
8404, Bay Crest Dr., Las Vegas, NV., 89128, USA
Jim, along with WO., James Bosley, were supporting ground units, out, of firebase “Jackson Hole,” (west, of Camp Hollway & Pleiku) in the Central Highlands. They crashed on a night mission, in monsoon, type weather, while flying, a UH-1, Huey “slick,” with nose art titled, “California Dreamer.” (named, after my home state and the popular song, called, “California Dreaming,” by the Mamas and Papas) Being one, of the most experienced pilots, at that time, I had been removed, as A/C., earlier, in the evening and returned to base, for a special flight mission. I never learned of the crash, or Jim’s death, until I returned, a couple weeks later. I always felt, that I might have been able, to prevent the accident, had I still been the A/C., that night. My heart goes out, to his family.
Friday, April 23, 1999