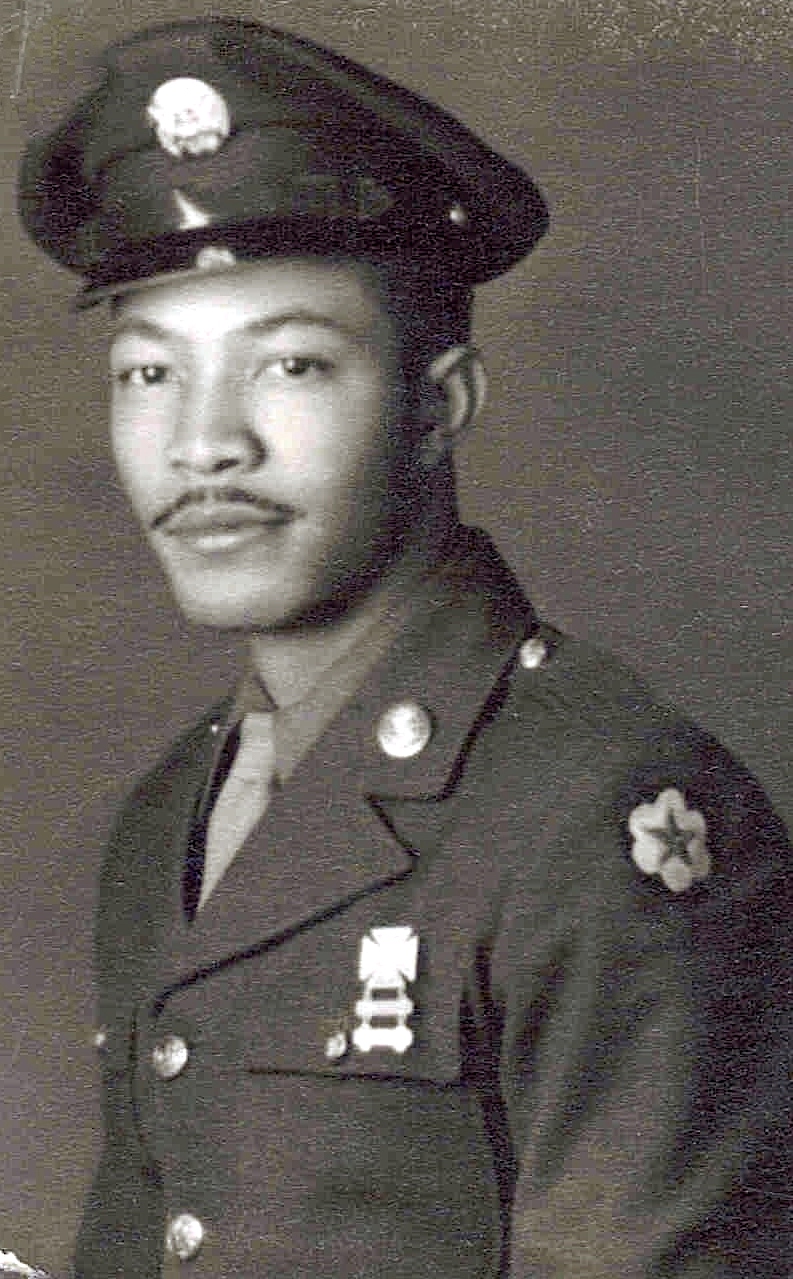 James Lennon Badgette, son of Bessie and Lafayette Badgette Jr. was born on December 30, 1921 in Knoxville, Tennessee. At the age of 22, James was inducted into the United States Army on June 15, 1944 during the height of World War Two. Immediately following basic training, PFC Badgette was placed on active duty and assigned to the 126th Port Company Transportation Corps as a truck driver. Nearly 75% of all Transportation Corps drivers were black primarily due to the belief at the time that blacks lacked the courage and bravery to be combat soldiers. As a result of this erroneous belief, the Army relegated them to relatively “safe” service and supply outfits where they were used as clerks, cooks, laborers and truck drivers. Convoys of black Transportation Corps drivers rolled all day, every day keeping the front lines supplied with food, weapons, ammunition, and fuel regardless of the weather.

In March 1945 the 126th Port Company Transportation Corps was deployed to the Pacific Theater to support ‘Operation Iceberg’…code name for the invasion of Okinawa…the last and bloodiest battle of World War Two.

The Japanese province of Okinawa and the smaller islands surrounding it lay just south of the Japanese home island of Kyushu in the Philippine Sea. At this point in the war, the decision to force a Japanese surrender by dropping atomic bombs on the cities of Hiroshima and Nagasaki had yet to be made and the capture of Okinawa and its surrounding islands were a vital last step towards a planned invasion of the home islands of Japan.

On April 16, 1945 U.S. forces attemped to seize Ie Shima, an eleven square mile island off the north west coast of Okinawa defended by over 2,000 Japanese soldiers and several hundred civilians. The 126th Port Company Transportation Corps landed there along with other elements of the U.S. Tenth Army. U.S. troops fought a vicious battle on Ie Shima against a determined and suicidally reckless enemy.

At 5:30 am on April 21, 1945, 300 to 400 Japanese soldiers, along with women armed only with spears, attacked a battalion command post positioned just under the rim of a hill known as ‘Bloody Ridge’. Here, the battalion commander, staff officers, clerks, cooks and truck drivers formed a defensive line along the crest of the hill. In a suicide attack, Japanese soldiers rushed into the line and exploded satchel charges. Some of them came within fifteen feet of the center of the command post and engaged the Americans in vicious, close-quarter, hand-to-hand combat. It is believed that during this attack, PFC James Lennon Badgette, then only twenty-three years old with less than a year in the army, was beheaded by a sword wielding Japanese soldier. By dawn, most of the enemy had been killed within the American lines and by 4:30 pm, Ie Shima was declared secure.

Although official records show May 24, 1945 as his date of death, it is believed that this was the date his remains were positively identified.

For his sacrifice, PFC James Lennon Badgette was posthumously awarded the Purple Heart medal. His remains were finally returned to the family in Knoxville in the summer of 1949 and interred at the Knoxville National Cemetery on August 9, 1949. PFC James L. Badgette is one of the 240,000 names forever inscribed at the “Cornerstone of Peace” memorial in Mabuni, Itoman-shi, Okinawa.
–Submitted by his nephews, Harold L. Badgette Jr. and Lennon K. Badgette 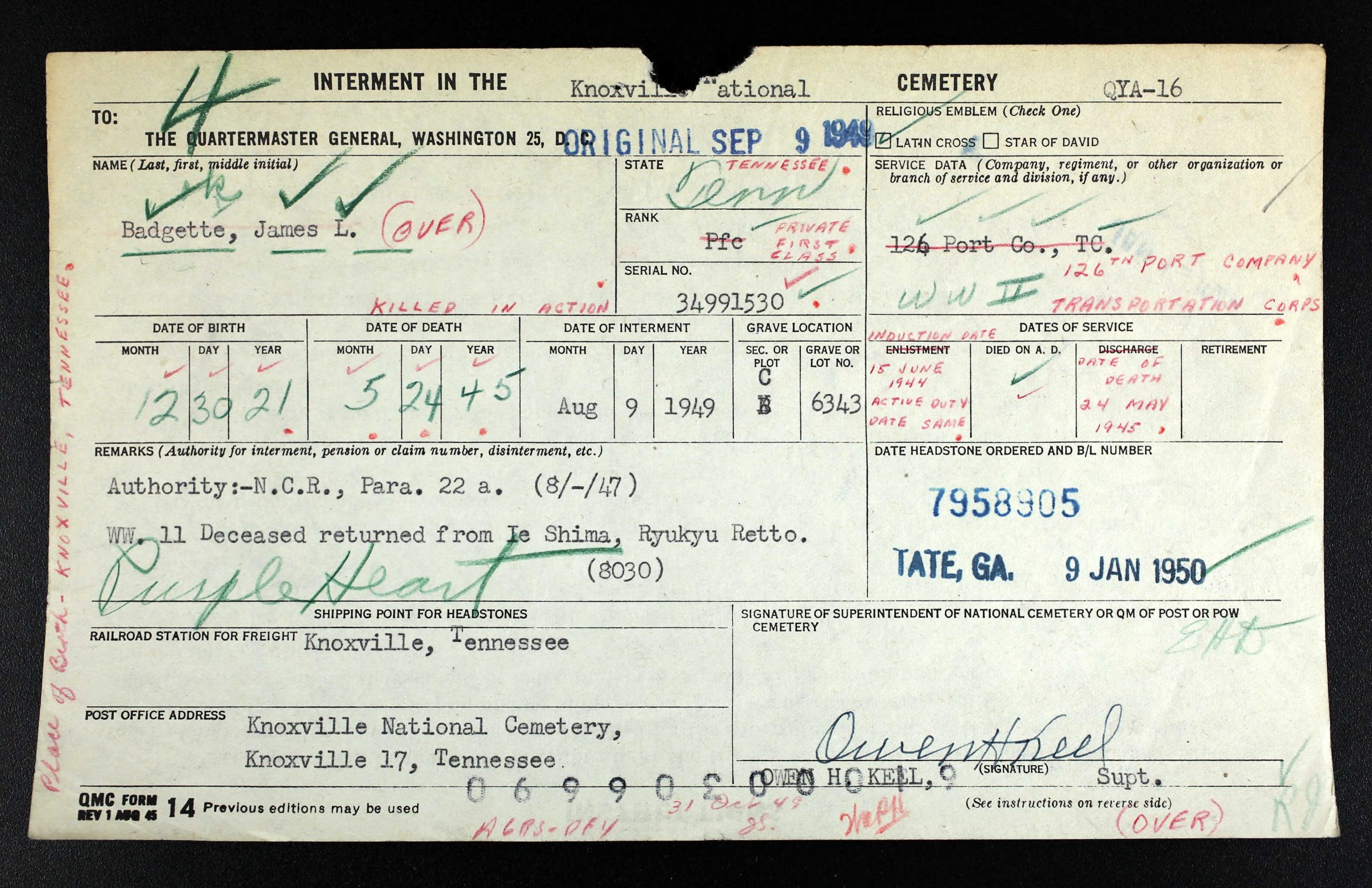