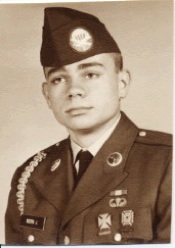 Private First Class James Kelly Keith III was born October 31, 1948, and was originally from Chattanooga, Tennessee. He served his country in the Vietnam War in the United States Army, with B Company, 2nd Battalion, 503rd Infantry, 173rd Airborne Brigade. His tour of duty in viet began on January 21, 1967. Less than two months later, on March 7, 1967, PFC Keith was killed by an explosive device in Tay Ninh province, South Vietnam. He was 18 at the time of his death. PFC Keith is buried at Chattanooga National Cemetery in Chattanooga, Tennessee, and is memorialized on the Vietnam Veterans Memorial on Panel 16E, Line 35. The following is a tribute to PFC Keith:

Carl Presley
friend
From one veteran to another
Jimmy, When you went in, I wasn’t ready to go yet. I eventually went and spent two tours over there. You were proud with your airborne wings and spit shined boots and also proud to serve your country. When we found out you were gone, it really shocked all of us. My friend, you are not forgotten. You were the first. Others like myself spent time over there, but we were lucky and lived. For whatever it’s worth, you met your maker a little earlier than we will. We are all older now and our life is getting shorter by the days. You were 18 and now we are in our fifties. We all will soon meet together in that wonderfull glory that has been such a mystery since the beginning of time. We often wonder why some have to die so young, and others like myself live for forty or fifty more years. God has His reasons that we can’t understand in this life, be we will someday. Jimmy, we are proud of you. Take care in the hands of our All mighty. Your friend, Carl Presley, Tyner High School and the United States Air Force in I Corps, Vietnam 69,70,71
Wednesday, November 16, 2005