James Isaac Blaylock served on the U.S.S. Louisville (CA-28)
Killed in Action
Memorialized at the Manila American Cemetery, the Philippines

Apparently KIA in a kamikaze raid on the USS Louisville, during the battle for Lingayan Gulf off the Philippines.

He was the son of Dorothy and James Blaylock of Summerville, GA.

“My father, Allen West Wages, was James’ 20mm gunnery mate in the 7th Division, as I recall. He left the Lady Lou two days before the suicide plane hit their station, killing James Blaylock. My dad was headed to electric hydraulic school in Washington D.C. at the time and subsequently marched in FDR’s funeral procession. My father named me Jim, after James Blaylock. My middle name is my father’s name, Allen. My dad told me a story about James many times over about when he was a fireman on a steam engine in Tennessee before WWII, after a firing run and a confrontation with the engineer, always with a big smile of endearment and a heartfelt laugh. It would be great to connect with his family after all these years. I have no individual pictures of James that I know of, only the group Division picture in the Man of War book that my dad added the names to the photo. One of my prized possessions. It would be awesome to have one. Thank you.

“Here are two photographs of the 7th Division, Starboard Watch that James Blaylock was in.  One is a clean photo, the other has the hand writing of my father, who is in the Port Side Watch photograph standing out side of the safety lines, identifying some of the Division that I assume he was buddies with.  “BLAYLOCK” is third from the left in the third row, under the gun barrels.  My dad always called him Jim, not James.

My father, Allen West Wages, was known as “Pappy” aboard ship, as he was the oldest enlisted man on the ship, born in Buffalo, Wyoming in 1914.  He had served on the West Virginia previously from 1934 through 1937.  He re-enlisted and came aboard the Louisville in February of 1942 in San Diego, CA.  They steamed to Pearl, where he saw the West Virginia at the bottom of the harbor.  Needless to say he was ready to defend his country and his old ship.

I also have a letter addressed to my dad from Wallace G. Murphy, who he identifies in the photo as “Murphy” from the Louisville stamped January 29, 1946 and sent from the Fleet Post Office in New York, NY.
–Submitted by his namesake, Jim Wages

Hello!
My dad Enrico Trotta who just passed this year in Feb. 2017 is standing right next to Pappy Blaylock. My dad was a S1c on a 20 mm AA crew on the port side main deck right under turret No. 2. My dad has the photo also. My dad told me when the first kamikaze hit turret No 2 (knocking it totally out of commission) Jan. 5, 1945 like shown in the video – Pappy & my dad were eating dinner & the plane hit & general quarters was issued.
They did not finish their meals. Good thing Pappy & my dad were not at their stations for the flames were bad. Turret No. 2 is currently in the Nevada Desert as a test station.
My dad was eating breakfast on Jan. 6 & Pappy stated that the USS Louisville lost her cherry let’s hope she doesn’t turn out to be a whore. (Old saying). My dad mentioned that Pappy Blaylock was about 45 years old & had a son in the Army Air Corps.
The second kamikaze hit Jan. 6, 1945 hitting the starboard side flag signal bridge which killed Pappy’s 20 mm gun crew. His gun crew was right by the 40 mm mount that was totally wiped out also. They are a few photos of this plane prior to hitting in the Man of War book – USS Louisville. My dad said that Pappy Blaylock was a great guy who was also a father figure to the sailors due to his age.
There were (51) sailors & Rear Admiral Theodore Chandler that my dad saw buried at sea.
God Bless our servicemen & women – past & present.
Take care!
–Submitted by Tony Trotta

This is my great grandfather… of course, I’ve never met him, but the pictures in my hallway, that I walk by daily is just awesome to me… that my pappy was a great man…
–Submitted by his great granddaughter, Kimberly Milburn 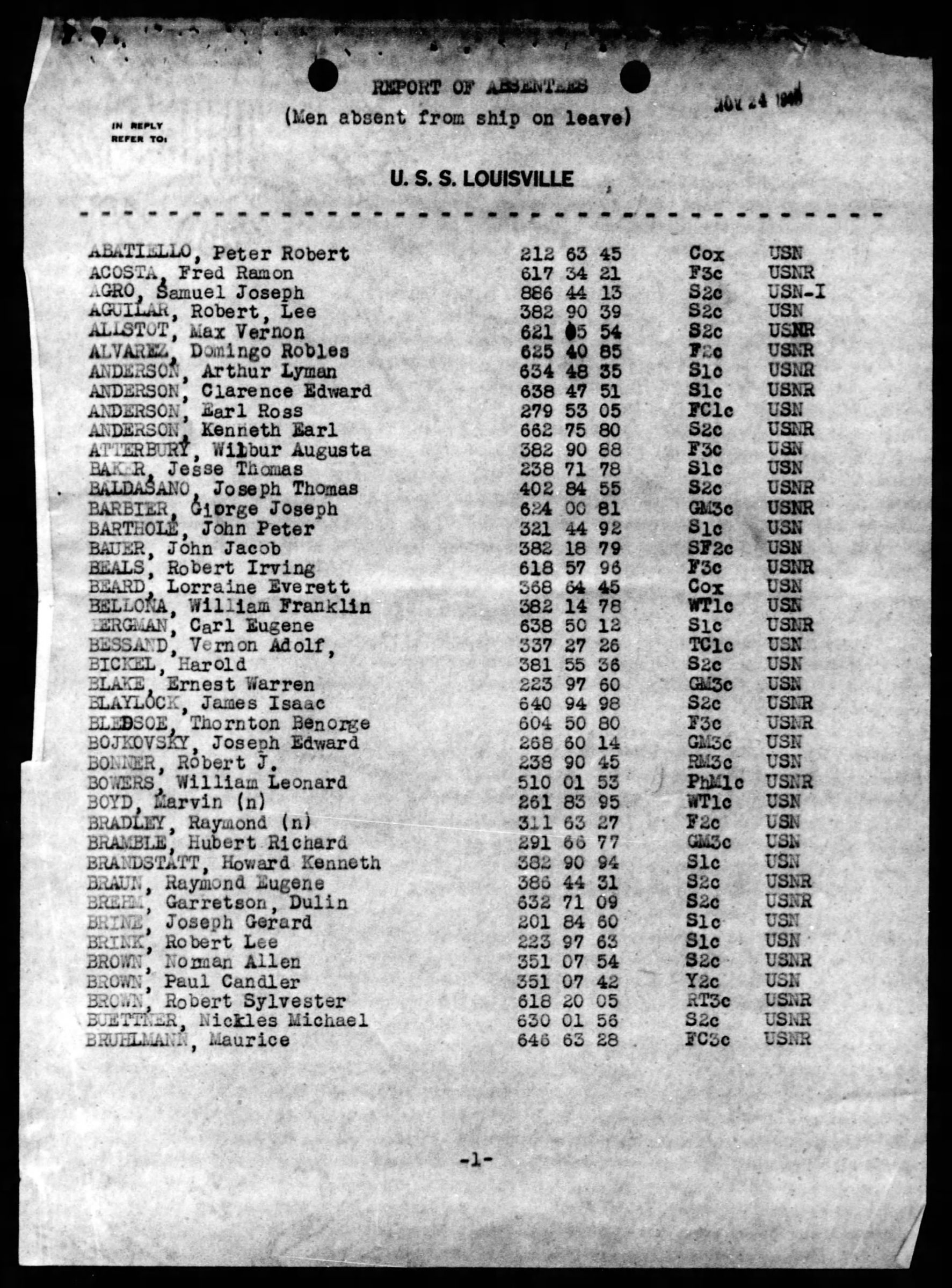 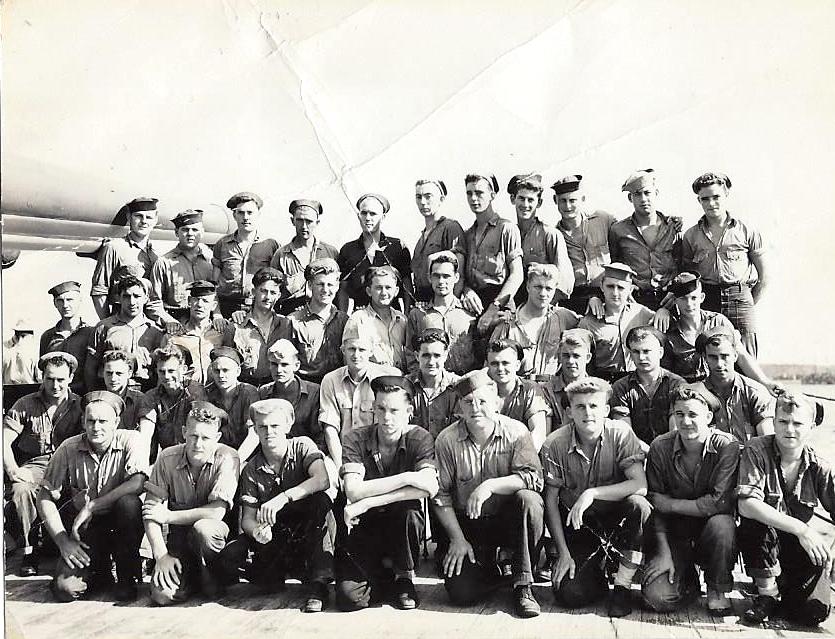 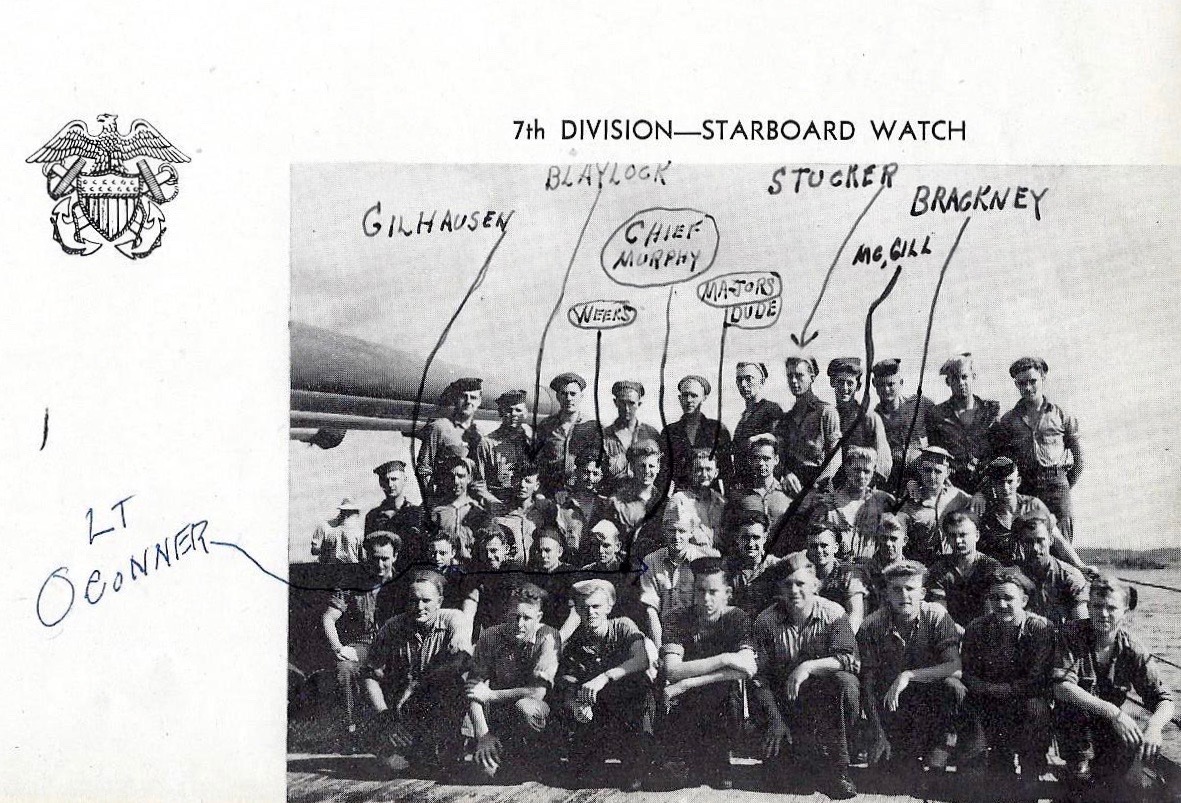