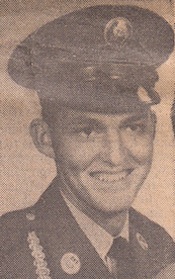 Army Specialist Four James H. Watson, 21 year-old Halls High School graduate, died Wednesday in Vietnam, his family learned Friday. Young Watson was the husband of Janice F. Watson and the son of Mr. and Mrs. J.M. Watson. The younger Watson home is on Beaver Creek Drive and his parents live at 4141 Felty Drive. A native of the Halls community, young Watson was graduated from Halls High School in 1966. He worked for a time at a North Broadway service station before being drafted into the Army last May. He had been in Vietnam since October. He was killed while on duty with the Twenty-fifth Infantry. Young Watson and his wife were married in May 1967. Besides his parents, he is survived by two sisters, Brenda and Sheila, and a brother, Gilbert, all younger than he and living at home. He had observed his 21st birthday February 14.

A North Knox County soldier died Wednesday of combat injuries suffered in Vietnam, his family has learned. Sp/4 James H. Watson, 21, husband of Mrs. Janice Faye Linkous Watson, Beaver Creek Drive, Rt. 2, and son of Mr. and Mrs. James M. Watson, 4141 Felty Drive, had been in Vietnam since October. The victim’s father said an Army telegram did not specify where or under what circumstances his son’s death occurred, except to say he was “killed in hostile action” with enemy troops. A 1966 graduate of Halls High School. Sp. Watson attended Tennessee Institute of Electronics here before joining the service last May. He took his basic training at Fort Campbell, Ky., and advanced infantry training at Fort Lewis, Wash. He had been stationed at Duv Tieng, northwest of Saigon. Besides his wife and parents, the victim leaves a brother, Gilbert; two sisters Brenda and Shiela, all of Knoxville; and grandmothers Mrs. Maudie Watson, Knoxville, and Mrs. Bessie Widner, New Tazewell. Sp. Watson’s wife had been living with her parents, Mr. and Mrs. Howard Linkous, while her husband was overseas.